Is there enough pizza to be had in Bay View? Apparently not, as a new purveyor, Strada Pizza, will open within a month or so at the bustling intersection of Kinnickinnic, Lincoln and Howell, at 2301 S. Howell in the former Mr. Webo’s spot.

“Strada – which means ‘street’ in Italian – will offer New York-style pizzas by the slice or pie, along with wings, wraps, burgers, salads, soups, smoothies, desserts and espresso drinks,” onmilwaukee.com reported.

The intersection has actually been a hotbed for Mexican fare with Mr. Webo’s competing with Guanajuato (2317 S. Howell Ave.) and Riviera Maya (2258 South Kinnickinnic Ave.). Strada will vary the ethnic mix more.

As we reported last week, Farwell Ave. has a brand new sit-down Asian restaurant, featuring Thai and Japanese entrees, and sushi. Owners Tony Koraneekit and JJ Lertsinsongserm moved to Milwaukee from Chicago last year. According to the Journal Sentinel, Koraneekit stumbled upon the location (formerly a House of Corned Beef and Sobelman’s Tall Grass Grill) while driving lost in the city. The cousins renovated the space and transformed it from a take-out location to an atmospheric dine-in restaurant.

The menu features a staggering variety of items (100 Japanese, roughly half that for the Thai options), and serves both lunch and dinner specials. Entrees can be mixed and matched, according to the Milwaukee Business Journal, into a “Two-Nation Special.” They also offer gluten-free and vegetarian dishes. 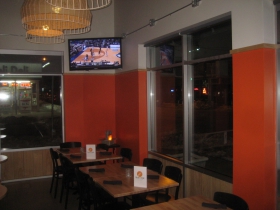 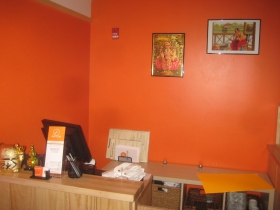 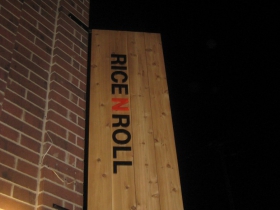 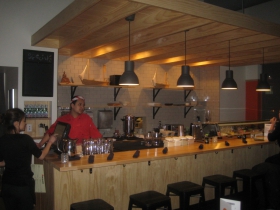 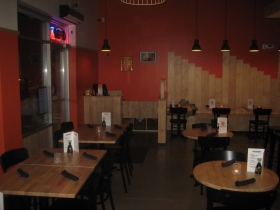 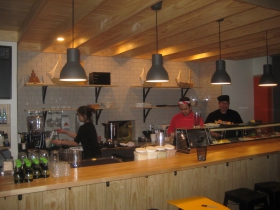 It may not have started here, but Milwaukee Burger Co. is coming soon to the city it was named after. The Wisconsin burger chain is a small operation owned by Kent and Matthew Lentes which started in Eau Claire in 2008, then opened locations in Wausau and Appleton. This April, they’ll be opening their first location in metro Milwaukee, just south of the city limits, at 6421 S., 27th St., in Franklin, at the former location of the Tumbleweed Southwest Grill.

The menu features almost 20 specialty burgers, with choices ranging from the traditional to the scary. Options like “The Defibrillator,” a peanut butter & jalapeño burger, and the “Death By Bacon” burger are available to the adventurous. The menu also offers a build-your-own option, as well as soups & salads, pub sandwiches, and wings. The bar features 39 tap beers, according to the Journal Sentinel, “with an emphasis on Wisconsin craft brews.”

A staple at all Milwaukee Burger Co. locations is the “Big Milwaukee Challenge.” Customers who are feeling lucky (and really, really hungry) can order the $16 Big Milwaukee Burger, a three-pound monstrosity featuring five ½-pound patties, layers of cheese and toppings, and two fried cheese curds on a bun. There’s also lettuce and tomato, if you’re worried about getting your greens. Challengers have 30 minutes to finish the meal. If they succeed, they get a free T-shirt and their picture on a Wall of Fame. Lovely.

For many years, Botanas has been a mainstay on the near South Side, at 816 S. 5th St., with a pretty sizable menu of mostly standard Mexican fare.

In September, as we reported, Botanas announced it would be opening a second place at 1421 E. Howard Ave.

Botanas II, as it will be called, will officially open its doors on Monday, March 2, as onmilwaukee has reported, and will offer nearly the identical menu to the original Botanas.

Anyone who watches ABC’s “Shark Tank,” where hopeful entrepreneurs pitch their business ideas to a panel of investors, may be familiar with Tom+Chee. The sandwich company, which offers some 25 unique takes on the classic combo of grilled cheese and tomato soup, went from a small food tent in Cincinnati to an expanding chain with over 20 locations nationally. Thanks to continuing media attention from shows like Man v. Food Nation and the Today Show, that number has kept on growing.  This April, Elm Grove will be getting a taste.

The company offers a varied menu, “mixing classic comfort food with fresh ingredients, healthy alternatives, and a flair for the unexpected,” according to the company’s official website. The menu offers everything from healthy options – the vegetarian Hippy Chee, salads, and vegan alternatives – to the outlandish, like the famous Grilled Cheese Donut. They also offer three styles of tomato soup to pair with your sandwich: classic, chunky basil, and creamy basil.

A license has been filed with the City Clerk to open a new bar/restaurant at 221 N. Water St., right next to the Rustico pizza place. The Legal Entity for the new restaurant is Black Tuna LLC and the Business Name is “Lucky Ginger.” Asian? We await more details.

After 30 years and two moves, Butch’s Old Casino Steak House is closing shop later this month. The restaurant, located at 555 N. James Lovell Street, is being sold. Owner and chef Butch Schettle opened the downtown restaurant in 1986. It’s known for its vintage décor, which includes antique slot machines. It was located on Water Street before it moved to its current location in 1994. We profiled the restaurant last year.

According to Schettle, business is good, but the building the steakhouse is located in is being sold. He told the Journal Sentinel the purchase is probably connected to the new Marquette University-Milwaukee Bucks sports medicine and athletic center, due to begin construction a block from the restaurant in about 18 months.

Schettle also owned Big Mouth Frog in Oak Creek, which closed last October for similar reasons, and Butch’s Clock Steak House on Plankinton Ave., which closed in 2009. According to the Journal Sentinel, he is focusing his attention and future endeavors in suburban communities. He currently owns and operates Butch’s Pub & Eatery in West Allis, Red Mill Pub & Eatery in Brookfield, and Butch’s Steak House in Oconomowoc.