Too car-oriented with too much pavement, it could become a vibrant intersection after some changes.

The complicated intersection of N. 12th St. and N. Teutonia and W. Garfield avenues is where Teutonia starts and then becomes one of the most prominent North Side diagonal avenues in Milwaukee. This meeting of three streets is a significant junction as one travels north from Downtown and into the Lindsay Heights neighborhood and beyond. Or if you’re driving on Teutonia from the Northwest side towards Downtown it is also where this avenue ends.

Once a bustling place of mixed-use retail and residential activity defined largely by single family-style structures, the intersection has undergone many changes and lost some of its previous pedestrian vitality. Today, it’s a bumpy intersection meant for ease of access of automobiles in transit. Despite the addition of handsome new infill housing on the southeast and northwest corners of the intersection, there is still one prominent vacant parcel that presents additional development opportunities. With exciting new additions to the neighborhood like the Wellness Commons, the Juice Kitchen and Outpost Foods, all just a few blocks west – one can only imagine the kind of visually captivating structure that could ideally wind up on the triangular parcel on the north side of the meeting of 12th and Teutonia. However, the way the intersection is currently structured, traffic heading north on 12th is encouraged onto Teutonia in a largely uncontrolled manner marked only by stop signs and muddled by mismatched entrances to Garfield.

This intersection is central to the fascinating and revitalizing Lindsay Heights neighborhood. Great collective work has been put in to beautifying and rebuilding this near north side community – largely the work of Walnut Way and the Zilber Family Foundation. There are strong community partners in the city and in Lindsay Heights committed to urban farming, greening of streets, multi-model transportation, and rehabilitation of existing historic structures. Quality new single family homes line the southeast entrance to the intersection as do tasteful townhomes on the northwest. A charter school sits on the northeast corner of the intersection and Leon Williamson Funeral Home and Milwaukee College Prep – Lloyd Street Campus on the southwest. You have a quality mix of uses here with a prominent opportunity to build a high visibility retail space on the north side of the parcel. With all these factors present, the intersection could be a successful, central gateway to Lindsay Heights and a striking beginning for those making the journey north on Teutonia.

There is insufficient traffic control at the intersection and the current confluence of streets is clumsy and provides ample opportunity for accidents. Although bike lanes have been painted along 12th south of the intersection, the pavement is still bumpy and the lack of traffic control makes the street unwelcoming to bikers. Drivers going east or west on Garfield will find themselves entering a jumbled and indirect intersection that leaves them trying to see the approach of traffic on too many sides. This sort of configuration leads to confusion among drivers unfamiliar with the neighborhood and increases the risk of accidents. The intersection could also be considered too wide, over-paved for the quantity of traffic passing through it. Much like the angled intersections once found in the Third Ward and eventually replaced, the abundance of vehicle-based pavement creates an unwelcoming space for pedestrians.

The key to improving this intersection is to streamline decision making for drivers, thereby improving pedestrian and bicycle safety. Remove excess pavement by creating a bump-out in front of the funeral home. Instead of allowing Teutonia to merge into 12th St., replace that onramp of pavement with a new border of sidewalks that would create a new triangle of space. Put natural plantings and a bioswale feature in that triangle to create a sense of natural space and be sure to include seating and perhaps a piece of public art to truly create a small area where students or neighbors may like to congregate. This reconfiguration would cause drivers traveling south to slow as they approached 12th Street.

Next, rather than allowing drivers to continue at a southeastern angle while traveling towards Downtown, route drivers into a bend in the road that would direct them to a four way intersection of 12th and Garfield. Repaved and smoothed out, Teutonia would meet an also repaved and painted 12th Street at an intersection with new traffic lights to regulate activity. 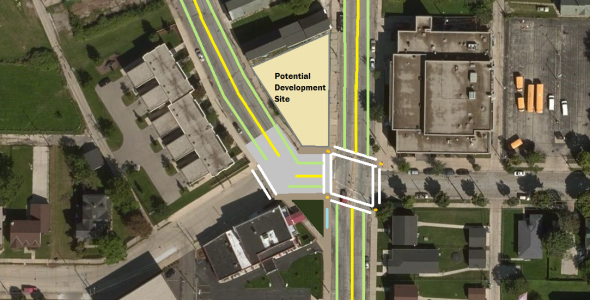 To promote the continuation of a bike corridor between Downtown and the North Side, paint bike lanes along 12th as well as Teutonia and install a Bublr Bike Station on the southwest corner of the reconfigured intersection. I would also recommend planting 30 storm-water-mitigating street trees along 12th and Teutonia to provide for some tree canopy and a softening of the built environment. And I would encourage the city to promote the development of a two- or three-story, mixed-use project at on the new northwestern corner of this reconfigured intersection.

It is vital that Milwaukee continue to promote and develop itself as a city of walkable and sustainable neighborhoods. Lindsay Heights is a proud and diverse community that should be connected to Milwaukee’s rapidly revitalizing Downtown. The city should promote a visually welcoming southern entrance to the neighborhood for bicyclists, transit riders and drivers entering or passing through the area. Perhaps as a measure to recognize the prominence of this intersection and to create a tie to the city, repave all of 12th St. all the way down to Juneau Ave. and line the corridor with harp lights and street trees. This could be a prominent statement in trying to bridge a major physical and social gap created by Milwaukee’s current climate of racial and economic segregation and reinforced by its built environment: i.e., the I-43 and McKinley Interchange, which separates this neighborhood from Downtown.

Lindsay Heights is a great neighborhood – I highly recommend visiting the original Jake’s Deli or grabbing a juice at the new Juice Kitchen – and stop by 12th and Teutonia to envision what could be. It’s an area worth talking about and making efforts to continue its improvement.