Built on a marsh, it became a magnet for immigrants. 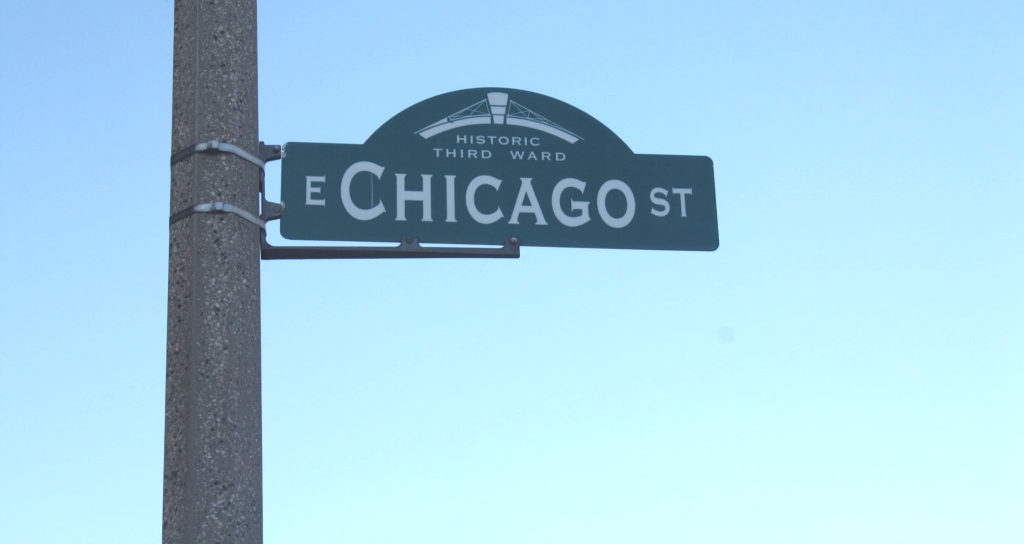 Chicago Street was built across a marsh. When Solomon Juneau and Morgan L. Martin named the future street in 1835, most of the land in the Third Ward south of Clybourn Street was swampy in wet times and spongy when it was dry. There was higher ground along N. Water Street and at the dune that paralleled the lake west of the beach. The half-block wide, ten-foot high strip offered natural flood protection from storms coming off the lake.

It took several decades to completely fill in the marsh. Earth from cutting down the bluffs along Michigan Street provided some of the fill, but soil needed to be brought in to make the marsh habitable. The work started from Clybourn Street southward and from N. Water Street eastward. News reports in 1861 tell us the east sections were still swampy.

In 1850, at the west end of Chicago Street, buildings lined the roadway as far as Milwaukee Street. In that year, owners between N. Water Street and N. Broadway were required to grade sidewalks along their lots and then gravel them. A sewer was installed on Chicago Street between Milwaukee Street and the Milwaukee River, providing a direct route for sewage to flow into the river.

The same year, a wind-swept fire burned most of the block bordered by E. Chicago, N. Water, E. Erie and N. Broadway streets, a small version of the big fire to come in 1892. The residences that burned or suffered damage were occupied by the “poorer class of the community.” The Irish made up the majority of that class, but sharing their poverty were immigrants from Germany, England, Wales, Scotland and Norway. Residents began referring to the Third Ward as, simply, the Ward.

By 1870 Chicago Street ran nearly to the lake. Sidewalks had been upgraded from gravel to wood planking. A few gas lamps shed faint light on the street. But the destruction of the dune along the lake exposed E. Chicago Street to the elements. In May, the waves from a lake storm flooded the area between E. Chicago and E. Erie streets all the way inland to N. Jefferson Street. The Milwaukee Sentinel blamed “sandsharks” for removing the sand from the dune and selling it, leaving “hundreds of obscure owners of little houses and lots” at the mercy of the unimpeded advance of the lake. In June of that year, Guido Pfister purchased the original courthouse and announced that he would move it to the south side of E. Chicago Street between N. Water Street and N. Broadway.

There were two efforts to rename Chicago Street, which is said to be an Algonquin word for a field of onion plants. One was due to the objection that the name Chicago Street, along with its neighbors, Buffalo Street and Detroit Street (now St. Paul Avenue), caused confusion with the cities of those names. The claim that mail destined for one of these streets might go to the city of the same name was not convincing and the matter died. A second attempt to change the name got a little further. An ordinance was proposed to name the thoroughfare Keenan Street, but that was also unsuccessful.

In the late 1870s, Chicago Street was shortened when the Chicago and Northwestern Railroad expanded along the lake and added freight buildings, forcing the street to terminate at N. Jackson Street. The street was then only about a third of a mile long from N. Jackson Street to the docks on the river.  Over the years, several children drowned when they were playing on those piers and fell into the water. A few drunks suffered the same fate when they lost their way on the docks.

By 1882 Chicago Street was paved with macadam. A building on the street was the site for collecting food and clothing for the city’s newest and poorest immigrants. Jews were being persecuted in Russia and 218 refugees from the pogroms were transported to Milwaukee. Some of them were boarded in the Third Ward, adding to the poverty of the neighborhood. Italians, mainly from Sicily, began to make their presence known in the Ward. A few Polish immigrants moved in. Chicago Street was also the home of “three Arabs,” who were, according to the Sentinel, “olive-skinned foreigners from the borders of the Red Sea.”

In spite of the ethnic diversity, the residents seemed to get along pretty well. The perpetrators of crimes and their victims were generally of the same nationality. There was at least one inter-ethnic incident, though. That was between a Norwegian named Christian Benson and Irish teenager Annie Hoye. Benson made one too many comments about Annie’s red hair and her nationality and then he wasn’t quick enough to avoid the brick that she heaved at him. Benson was taken to his home with a head injury and, presumably, no further desire to make any more comments to Hoye.

Many of the Ward’s residents were forced to flee their burning homes on October 28, 1892 when a wind-swept conflagration destroyed over 400 buildings in Milwaukee’s largest fire. Almost every structure on Chicago Street was reduced to rubble or ashes. During fire fighting efforts, the decision was made to blow up a building at the corner of E. Chicago Street and N. Broadway. The theory was that if the building was no longer there, the fire would not spread. The three kegs of dynamite produced a huge explosion but did nothing to stop the fire. Two firemen and an unknown stranger died when the walls of that building later collapsed on them.

After the fire, warehouses and other business buildings were built to replace many of the homes that had been destroyed. Most of the Irish moved out of the Ward, their places taken by a smaller number of Italians.

During the 20th century, a landfill project pushed the shore of the lake about two blocks further east. The landfill first served as an airport, Maitland Field, and then as a Nike anti-aircraft missile base. Currently, the Summerfest grounds are located there. Now that Chicago Street extends to Harbor Drive it is the longest it has ever been, nearly a half mile. 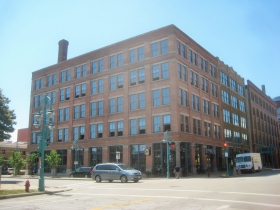 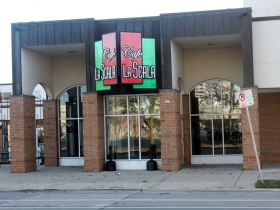 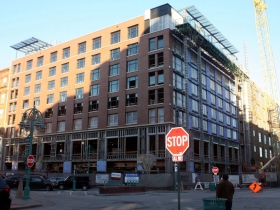 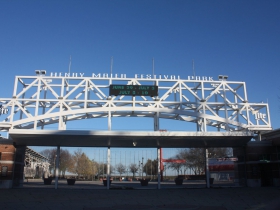 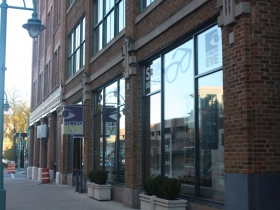 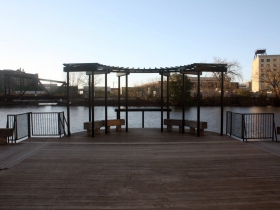 One thought on “City Streets: The Short Swampy History of Chicago Street”