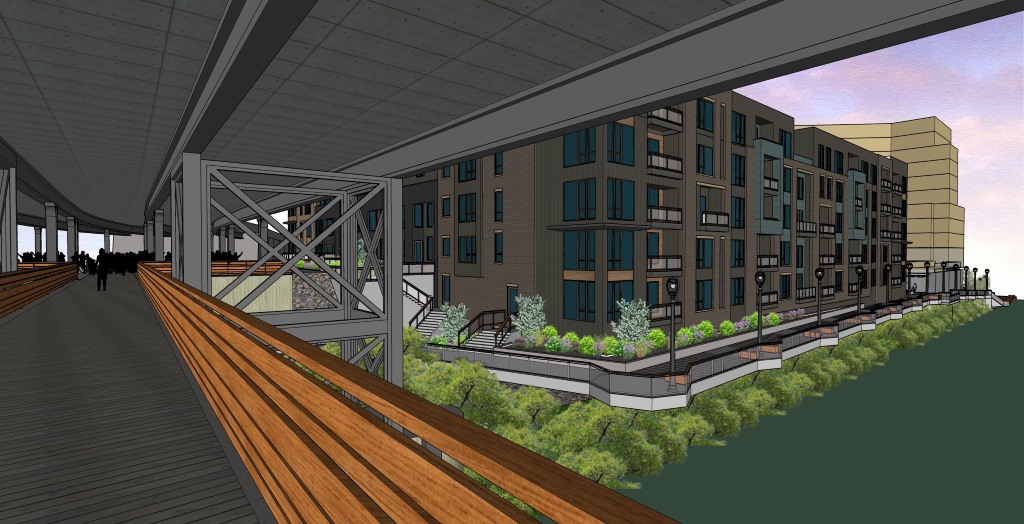 Redevelopment in the city of Milwaukee has come to the point where having a front yard under a bridge is “hot” real estate.

The Milwaukee Board of Zoning Appeals will have a full calendar this evening, Thursday, November 12th. Item #55 is a Special Use Request “to construct a multi-family dwelling that contains dwelling units and accessory parking units on the street level” at 1701 N. Water St. [Update: The special use request for this project was approved at the November 12th BOZA meeting.]

This dry agenda description belies an exciting reality: the proposal by Wangard Developers, doing business as Brady & Water LLC, calls for approval of four townhouse units to be constructed at the north end of the proposed 89 unit riverfront development planned for the western end of E. Brady St.

Here’s the kicker — the four units will front on a sidewalk only, with no direct street access. Directly across the sidewalk is the famed Swing Park, located at the eastern terminus of the Edward D. Holton Viaduct Marsupial Bridge.

The Swing Park, an ad hoc Creative Placemaking site, energized the underside of the Holton Viaduct when it was surreptitiously installed in September 2012 by Keith Hayes, a UW-Milwaukee architecture graduate, and some friends. (See Plenty of Horne: Holton Bridge Swings October 15th, 2012.)

Today, the land to the south of the bridge at the swing park is an unused parking lot, and the land further downstream has been cleared for development. The Phase I proposal would call for interior parking for a three story apartment building to be built on the portion of the site between the bridge and E. Brady St. extended. A later Phase II, extending south of Brady, would be developed later and could be as high as 12 stories.

The plan was discussed Wednesday, November 11th, at a meeting at Avenir Apartments, developed by Wangard Partners at 1401 N. Jefferson St., and opened this year.

Eric Harrmann, a designer with AG Architects, Chris Socha of Kubala Washatko Architects, and Wayne Wiertzema, President of Wangard made the presentation before an audience of about 30. 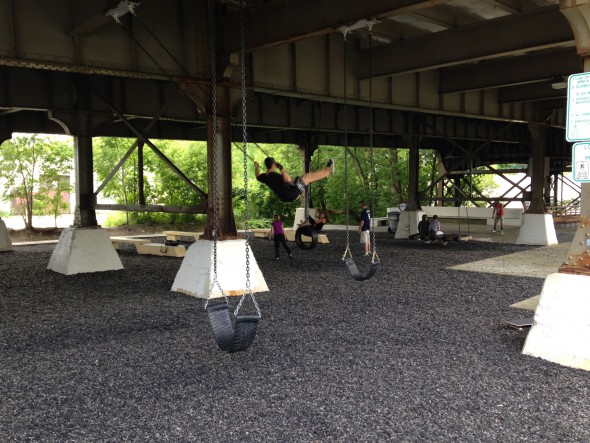 Socha explained the reasoning behind locating the townhomes at the swing park: “The Swing Park has proven to be an asset. It’s kind of an amazing, hard-to-activate space under a bridge.”

The townhomes will give “eyes on the street,” and the “units will relate to the special location,” he added.

The Holton Bridge, designed by City of Milwaukee staff during the Socialist administration of Mayor Dan Hoan, and constructed in 1926, “is a remarkable structure.” And Brady Street, Socha said, is a remarkable neighborhood, “I’ve lived on Brady Street for ten years. I can walk out the door and never be bored,” he said.

That concept of Neighborhood-as-Playground (complete with swings) figures into the developer’s calculations for the property, Wiertzma said. He cited a “demand from Millennials and Baby Boomers” for downtown housing, adding that the Avenir has met his expectations. Even so, there is room for a building like that proposed, to have units ranging from a 600-square-foot “micro studio loft,” to 3-bedroom apartments as large as 1,543 square feet.

The larger units are aimed at the Baby Boomers, he said, but may also appeal to the Millennials who live there, like the place, and would like to remain once they have children.

Harrmann said the project calls for a “Mews” at the end of Brady Street, a kind of upscale alley where the retail component will be located, accessed largely by foot on a site that will gradually slope toward the river, with some landings that will provide gathering spaces. A balcony for residents will overlook the Mews and the river, as Lakefront Brewery beckons across the Marsupial Bridge. The retail spots will be broken up to increase visual appeal of the property, as well as to distinguish them from the residential portions.

The building will be of courtyard design, with internal parking accessed from N. Water St. just north of Brady, and not visible from the street. The parking structure will have a rooftop garden for residents, he said. It will contain 99 parking spaces for the 89 units of the building, which is a greater number than called for in the building code.

Along the river, the building would continue the Riverwalk below the Marsupial bridge and send it on its way downstream. There will not be a sheet piling seawall at the property. Instead, pilings would be sunk into the steep bluff, and a riverwalk would be hung from the structure of the building itself. It would be about 16 feet above the water’s mean surface. Below, the natural shoreline would be landscaped. The riverwalk would pull away from the building at its northerly edge where it intersects the Marsupial bridge. There will be “seating opportunities” there and along the Mews.

Hopefully, the riparian landscape will take some cues from the Greenway Gateway, and Kane Commons, both upstream on the river and both of which have incorporated native vegetation, unlike the boxelders and other botanical outrages currently rampant on the site.

Phase II would include signage on the riverwalk identifying Brady Street. A boat dock is also planned, says Wiertzema. “Not for powerboats,” he said. “for canoes and kayaks. Owners will have storage opportunities” there, he said.

Asked if we are facing an “apartment bubble” in which the number of units is growing too large, as had happened a decade ago during the “condo bubble,” Wiertzema said, “No. We have found sustainable demand” among the boomers and millennials.

Asked if Wangard plans to convert the apartments into condominiums, Wiertzema said it is the firm’s plan to retain the property in its residential portfolio. 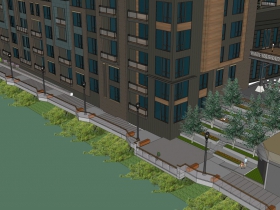 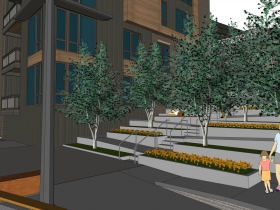 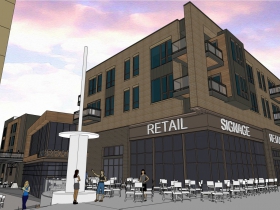 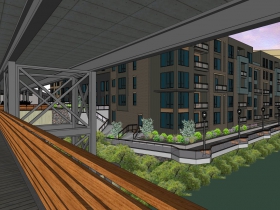 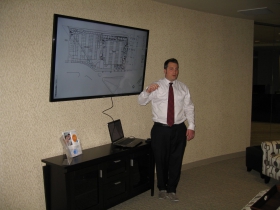 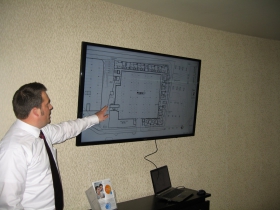 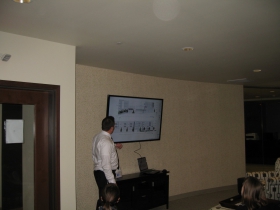 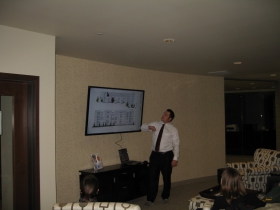 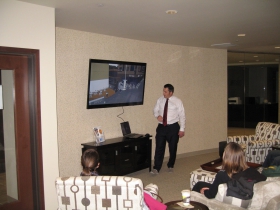 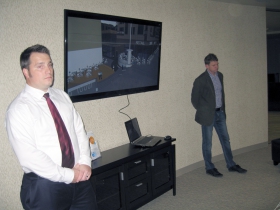 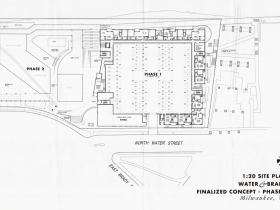 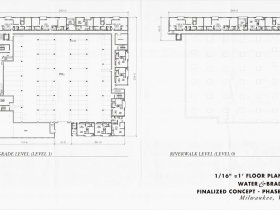 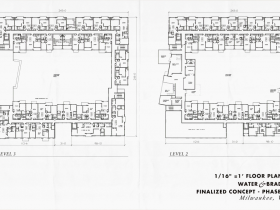 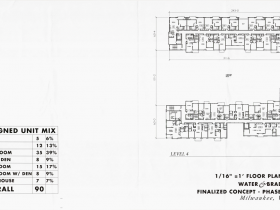