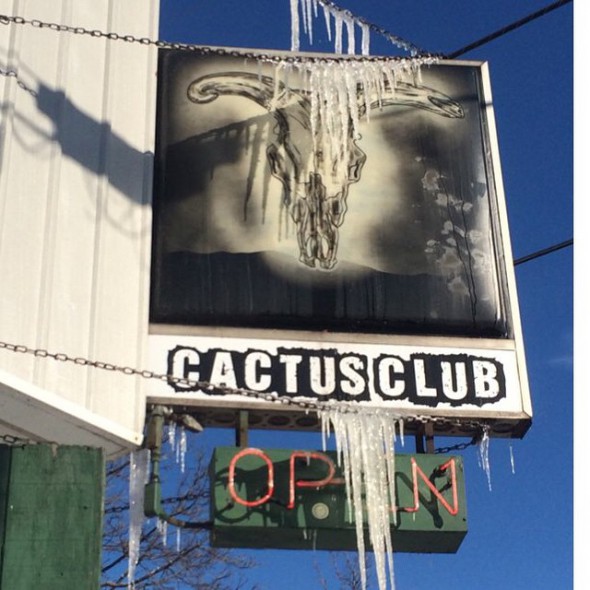 For someone born in the 80s Bay View’s Cactus Club seems like a classic Milwaukee institution, something akin to Real Chili. Cactus is definitely an icon, but it’s hardly old, at least not compared to other beloved establishments in town. For kids who were born in the 70s and grew up on 90s rock Cactus Club holds a special place in their heart. The intimate venue played host to bands like The White Stripes, Death Cab for Cutie, and Interpol well before they broke big.

Today the Cactus Club (2496 S. Wentworth Ave.) continues to host bands from all over the map. Japanese noise rock, Minneapolis two-drummer indie-electronic, East Coast underground rappers, Nashville 90s alternative revival, those are just a few of the shows I’ve seen this past year at Cactus. According to bartender Mike, a lot of out-of-town bands like to drink Schlitz. They think it’s ironic or whatever. I’m sure it has nothing to do with the impressive bronze Schlitz lady statue that sits above the bartender’s register. While concerts are Cactus’ bread and butter, their bar is open seven days a week and is separate from the show room. They open at 3 p.m. daily and their happy hour runs from then until 7 p.m., Monday through Saturday.

Cactus’ happy hour includes discounted Bloody Marys, rail cocktails and tall boys. House-made from scratch Bloody Marys are $5 with a 7 oz. beer chaser of Rhinelander. Rail mixers are $3 and most tall boys are $3 (Miller Lite, High Life and PBR), with Hamm’s running a whopping $2. If you’re not a fan of any of those they have 16 taps, with 6 pales, 3 lagers, 3 stouts and porters (include Central Waters Mudpuppy Porter on nitro), one cider (McKenzie’s Black Cherry), and four other ales. They’re involved with BeerMenus.com, which allows you to see their current tap list on your phone and be notified when they get new ones. All taps are $5 except the two nitros (Mudpuppy Porter and Guinness are $6).

The nearly 50 bottles and cans at Cactus range from $3 to $7, with most crafts at $5. They currently have two bottle specials, Ale Asylum Madtown Nut Brown and Capital Brewing Wisconsin Amber at $3. In addition to the standard domestics, Mexican beers, Crispin ciders, and national crafts, they also have Delirium Tremens (Belgian strong ale) and James Page’s gluten-free A Cappella Pale Ale.

Packers games are a unique experience at Cactus. They set up bleacher seats behind the bar, which is a half circle, giving it the feel of sitting in the round, almost like being at Lambeau. Hearty amounts of free brats and jalapeño wonton poppers are usually available. And of course, touchdown shots.

During my time at Cactus this week I had an engrossing conversation with Greenwich Village-raised, 14-year sound man Alex. His perspective on the modern Milwaukee and New York City music scenes was enlightening and humbling. He’s done sound for over 10,000 bands, making it impossible to pick a favorite. “I approach each act like they’re my favorite band,” he told me, which probably accounts for his well-regarded mixes.

While Mike was mixing a cocktail for a girl from Colorado we got on the topic of the Old Fashioned and other Wisconsin-isms. Apparently we’re the only state that offers a beer chaser with our bloody mary’s. Cactus doesn’t have a cocktail menu but their bartenders have the skills, so feel free to make a request. I was a big fan of the splash of ginger brandy in my Old Fashioned.

On non-concert nights Cactus might have a DJ mixing in the bar. They’ve been doing sporadic rock n’ roll trivia on Thursday nights, hosted by Casey Hughes of Platinum Boys, which Alex suspects will pick up more during the winter. Live music dominates their schedule but occasionally they’ll have a comedy show, like November 5 with Preston Lacy, Tom Garland and my favorite Milwaukee comedian (though he recently moved to Chicago) Sammy Arechar.