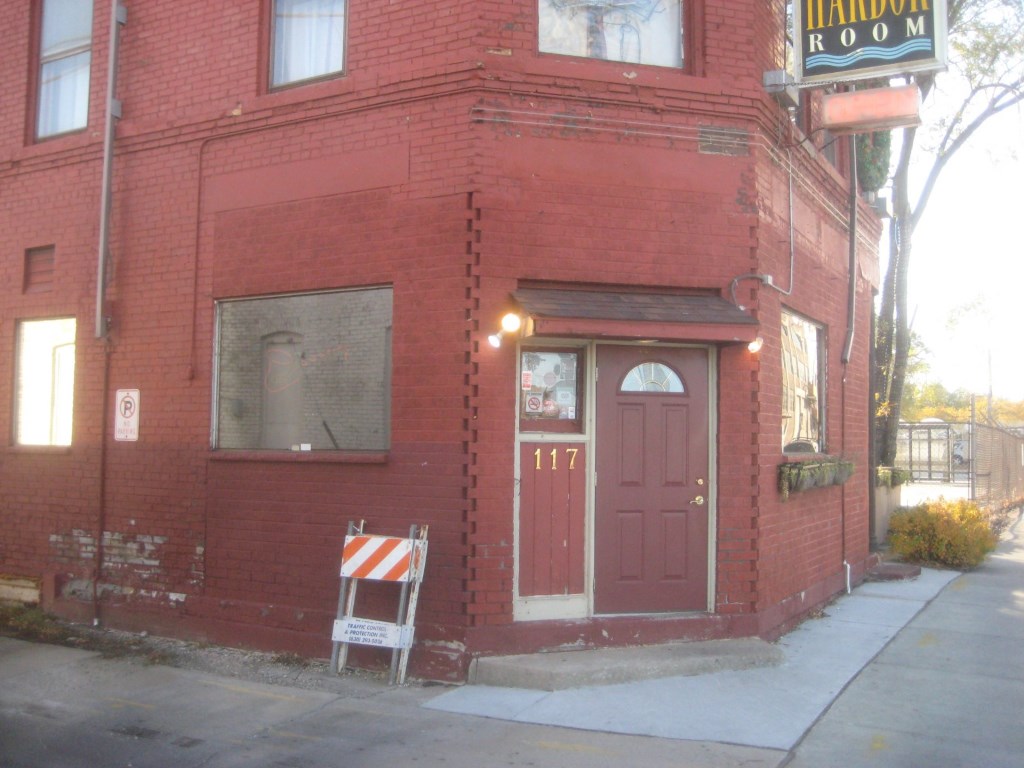 In 1890 John Langenberger paid $1,600 to construct a foundry on this site. It was a small affair, maybe 25 feet square, and not much bigger (or more substantially constructed) than the humble cottages that abounded on the near South Side as Milwaukee plunged head-first into becoming a manufacturing colossus. Already the neighborhood featured a Smelting Works, the Milwaukee Brass and Copper Works and Hack and Altjen’s Steam Dye Factory. Across the street, immediately to the north, was another foundry complex, vacant in 1894, but soon to come back to life for another century.

By 1907 the George Smith Steel Casting Company to the north was one of the largest buildings in the city, and the cottages grew fewer and fewer, displaced by industry while the supply of thirsty foundry workers ever increased.

This state of affairs came to the attention of the owners of Miller Brewing Co., and on July 27th, 1907 the firm took out a permit to construct a “store and flat” designed by Wolff & Ewens, architects. The city cautioned the architects that the building’s “steps [are] not to project over lot line” on the tight site, and therefore it was constructed with a little cut-out corner on the northwest and northeast to accommodate doors that would not encroach upon the public way.

It doesn’t seem like Wolff & Ewens put too much effort into the building, and neither did it do much for the Miller Brewing Company bottom line, for by 1915 this saloon was the property of the Joseph Schlitz Brewing Company which had to pay $1,000 to “underpin” the structure. Within a few years Prohibition gripped the land, putting the brewery operations of Miller and Schlitz out of business, while somehow the little saloon survived by selling “soft drinks,” which is what they called beer during prohibition.

The building fades from history at this time, and it would hardly be noticeable to passersby surrounded as it was by monstrous manufacturing concerns. The neighborhood was replete with tin shops, stone cutters, a brass foundry, the G. J. Meyer Machine Shop, the Shadbolt and Boyd Iron Company, and Windsor Manufacturing Co., maker of lead pipes.

All were just a few blocks away.

In 1934, with liquor now legal again, Justina Damjanovich [1894-1984] applied for a certificate of occupancy to run a tavern here. The former use of the property during Prohibition? “Tavern — 27 years,” wrote Damjanovich. She should know. She lived above the tavern, and cooked meals upstairs, which were then dumbwaitered to the customers below.

The building inspector poked around and noted a garage out in the back yard.

It was “corrugated, out of plumb, not painted, corroded. Entire building built out of second hand materials by some mechanical persons,” the inspector wrote. Those mechanical persons were likely paid in beer. The building had a “cool damp basement,” the inspectors found. This may have been ideal for storing beer, but in 1937 Nick Damjanovich installed a refrigerating system for the building and discontinued his block ice orders. The basement remains cool and damp, it appears, judging from the liquid discharge that pours out to the alley next door quite regularly.

By 1960 the tavern was owned by George Stoisolovich [1924-1998], whose name was misspelled by the city in many different ways including Stoisotovich, and Stosiolovich. To make things simpler, he just went by George Stacy. From about 1953 to 1973 he ran this place as a union bar for Allen-Bradley workers at their huge factory to the west.

In 1974 George took out a permit to lower the ceiling on the tavern, to panel the existing walls with wood, to close the existing storefront windows and to move the door to accommodate a new bar, topped with Formica in the Brooks Stevens Boomerang design. The ceiling has since been returned to its original height, and the windows have been slightly expanded since then, to the great improvement of the interior, although this place is still dark as night, which is how the customers like it.

In 1974 Gail Marciniak put up a Pabst sign on the building reading “Alley Inn.” The tavern took its name from the mini-thoroughfare located immediately to the east.

In 1977 Sharon A. Dixon wanted to open the place as “Break Away,” but her occupancy permit was cancelled. This is probably just as well, since in 1998 Dixon was found guilty of Arson of Building with Intent to Defraud for burning down a club she owned at 200 E. Washington St., just blocks away. In 1981 Darlene Olson wanted to open a bar, and was granted a capacity of 25, down from the previous 50. Good old George Stacy still owned the place.

In 1990, the place was called the Pub, and a character named Arthur Friedman owned the building.

Wade Robert Williams operated it in 1992 as “The Other Place,” a gay bar that did not last long, and in 1994 Pablo Macias ran the joint. When the city inspector complained about the leaky roof, Macias said he couldn’t afford to make repairs and that the owner would not make repairs. Stalemate!

Finally, on June 6th, 2000, Gregg Fitzpatrick and his Wisconsin Investment Group, Inc. took out a license to open the “Harbor Room,” and this place takes on the style and dignity to which we are accustomed today.

In a 2002 Electrical Permit Application, the city records the use of the property as “Gay Bar.” No kidding! In that year, an “in swing door has been rehung to out swing,” thereby increasing the capacity to 80, [now raised to 160] which it achieves on rare occasions. The annual Mr. Harbor Room Contest, held this year on July 26th, really packs them in. [For a photo of Dennis D.J. Christie, the 2015 winner, check out the coverage in The Leather Journal.]

The Harbor Room is within the subset of gay establishments known as “Levi and Leather Bars,” butchy places that appeal to men’s men. You will not find RuPaul‘s Drag Race contestants here, that’s for sure. You will have to search elsewhere for Trixie Mattel when she’s in town. The number of leather bars, and the number of gay bars in general is rapidly diminishing in this city and elsewhere.

Many of these bars prided themselves on their relatively hidden locations — obscured by factories, and located in out-of-the way corners of industrial neighborhoods where the gay bars were banished in the old days. Places where your wife wasn’t likely to find you, unless she was on her way to a lesbian bar.

But with the factories gone, a place like the Harbor Room has a chance to shine, and shine it does with a string of red lights illuminating the top of the building, while a giant Christmas wreath welcomes all seasons from above. A small patio to the west of the building is rather attractive, in a butch way, with a number of do-it-yourself structures that call to mind the inventiveness of the folks who gave the property that corrugated metal garage decades ago. 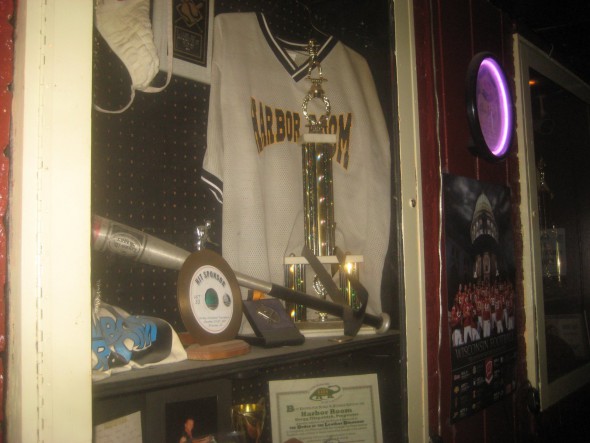 One tree has been carved to reveal a face in the wood, and a number of flowers are giving it their all as the season declines. The patio will remain open all year, with a little enclosure for the smokers, who tend to prevail here.

Inside it is dark, with a pool table at the south end of the room, a little raised dance floor in the middle, and a number of Halloween decorations livening the place up. A ledge above the bar holds dozens of empty bottles, including many Jagermeisters of parties gone by. The bar itself, with its Formica top, runs along the west wall of the building. There is a mirror behind it, obscured by the shelves of liquor that are stored there.

There are a few signs in the bar (it used to have dozens of them), directed toward the staff and customers. “No Visitors No Exceptions,” reads one by the stairway that leads to the unknown realm above where once the tavern owning families lived and prepared meals for hungry union workers. “Beware of Dog” reads another sign.

“DRUNKENESS on the job is not allowed & their [sic] is No Need to have a shot with every Patron or Dice game,” reads another helpful reminder.

The tavern has its drink specials, which tend to have expired just minutes before I order my drink. I think it helps to be a regular, and most folks seem to be on a first name basis here.

There will be a Halloween Party on Saturday, October 31st, with a $100 prize for first place best costume, which will probably be the least costume, if the standards of Mr. Leather are upheld for this season. Or stick around to celebrate the owner’s 63rd birthday on November 3rd.

The enlarged windows on E. Greenfield Ave. never used to look out on much, but with the demolition of the old Grede Foundry building some years ago you can now see all the way clear to downtown.

But not for long. Last week a groundbreaking was held for Freshwater Plaza, a mixed-use development that is now under construction, and which will bring to the neighborhood a grocery store, apartments and offices. To the east, the UW-Milwaukee Graduate School of Freshwater Sciences just opened its $45 million campus, and plans are afoot to determine the future use of the coal pile down the street and, eventually, the redevelopment of the giant Milwaukee Solvay Coke site.

Owner Gregg Fitzpatrick was at the ground breaking, and shook hands with the mayor. This profitable business should be even more so when the time comes to sell the real estate.

Of the hundreds of cottages that were once in the neighborhood, only a few survived even the earliest years of the twentieth century. (The entire Allen-Bradley site was filled with cottages at the turn of the century.) Three cottages remain just south of the bar on E. Orchard St., isolated within their industrial hell, and charming as can be. 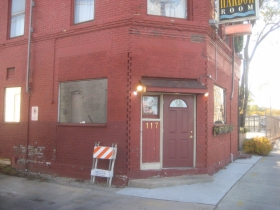 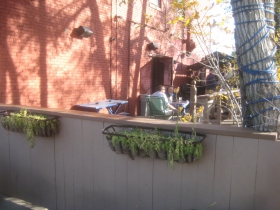 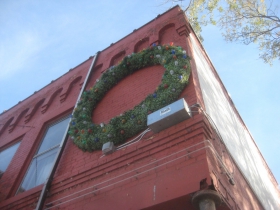 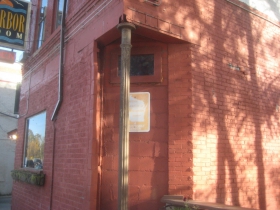 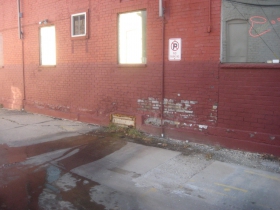 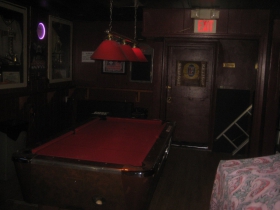