$48 million mixed-use development has a little to do with water and a location near inner harbor. 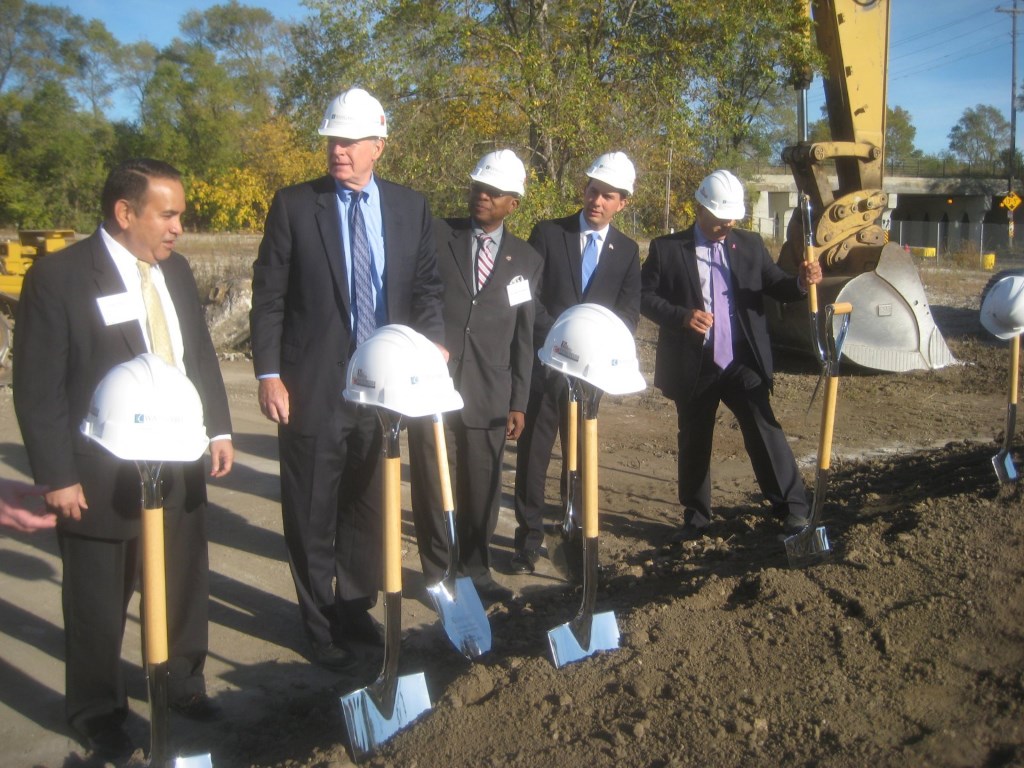 About to break ground on Freshwater Plaza. Photo by Michael Horne.

Milwaukee’s new identity as the “Fresh Coast” city with the growing water hub just keeps getting more play, as an event Thursday showed. The scene was Freshwater Plaza, 1320 S. 1st St. where, up to now, the only construction permit taken out on this property was one to erect a tent for the ground breaking.

But work will soon be under way here. Indeed, the construction officially began on Thursday, when a platoon of dignitaries yielded silver shovels on the gravel-strewn 277,420 square foot vacant lot at the northeast corner of S. 1st St. and E. Greenfield Ave.

And the dignitaries were led by no less than Governor Scott Walker. It’s been some time since the erstwhile presidential candidate had been in such close contact with the soil of his adopted state.

As the event got underway, the Allen-Bradley thermometer showed an unseasonably warm temperature of 59 degrees, while the famous clock tower read 3 p.m. These monumental structures were one of the first things he saw in Milwaukee when he moved here to attend Marquette University 30 years ago, the governor told attendees. His dorm room at the time was on an upper floor of the south side of what was then the YMCA downtown, with Allen-Bradley, located between Scott Street and Walker Street, clearly visible.

“That clock tower is a beacon,” the governor said, and the Freshwater Plaza development “sends a message that in this neighborhood, city and state things are happening.”

Lovely weather for a ground breaking. Why, the tent was not even needed, noted City of Milwaukee Department of City Development Commissioner Rocky Marcoux, who was among those wielding shovels and making speeches at the event, which drew 100 people to the desolate site.

This was only a marginally larger group than the 40 who participated in the real estate closing meeting, said Stewart Wangard, the co-developer of the $48 million mixed-use development here that will include offices, apartments and a one-acre Cermak’s Fresh Market grocery store. None of the offices will have anything to do with the water hub, but the location is right next to where the UW-Milwaukee’s new School of Freshwater Sciences has been located. Moveover, the Wangard website notes, “The site will incorporate cutting-edge water management techniques and features that will allow for the separation of the combined sewer system for the area” in cooperation with the Milwaukee Metropolitan Sewerage District.

As this suggests, there were many pieces to this deal, and many players involved, particularly in the financing, as Wangard noted. That would explain the presence of so many bankers, lawyers and politicians in the audience.

Wangard received about $30 million in bank loans from U.S. Bank and Tri-City Bank, he said. In addition there was a reported $3.2 million in equity financing, a $1 million grant from the state, over $10 million in federal New Market Tax Credits, and $4.8 million in city Tax Incremental District financing.

A program for the event listed these among 13 total “producers” involved in coming up with the money to make the deal happen. Among them was partner Dennis Klein, who will co-develop and own the commercial structure (while Wangard concentrates on the residential part of the structure) and Michael Bousis, the Chicago grocer who will own and operate the Cermak’s Fresh Market.

Why the complexity? What happened to the days when rich guys could finance their own buildings without getting everybody in town involved in it?

Wangard answered that in his opening remarks. “The site had been left with contaminants” from when it had operated as Grede Foundry, he said. Early in his plans to redevelop the site, he said, he got in contact with the folks from the 16th Street Community Health Center, which serves the nearby community and its predominantly Latino population.

The rain would wash the site pollutants “directly into the water where people fish,” he said he was told. For many people the fish would provide a welcome adjunct to their diet, and an unwelcome concentration of heavy metals into their livers. Children are especially vulnerable, he said. The site had “soft soil, extremely contaminated remnants of a former factory,” he said. There was nothing “fresh” about that water.

The building, by encapsulating the contaminants, will prevent the runoff from entering the waterways, he said. But it came as an unexpected, added expense, requiring even more complexity in the financing of the project than was originally anticipated, he said.

But the long term prognosis for the site is ideal, Wangard said, with Bay View to the south and the Historic Third Ward to the north along this busy thoroughfare that was once little more than a wide industrial alley. He and his equity partners will personally guarantee that their development will generate sufficient tax revenue to repay its city financing.

Mayor Tom Barrett welcomed what he called the “neighborhood investment.”

A city “needs to have a strong heart, and Downtown is the heart of the city, ” he said. “But you need to have strong neighborhoods. To have a strong city, you have to be strong everywhere.”

Ald. Jose Perez gave some personal reminiscences about the site, and inferentially about the immigrant experience. His grandfather worked at Grede Foundry, he said. This site provided an anchor and an income for the family, and now it will also provide food for the community. Perez was influential in getting the city to agree to have a market on a site for which it had not envisioned a grocery.

Marcoux, in his remarks, called it “an interesting project” with “many different facets.” He said that a charrette was underway to plan for the future of the neighborhood to the east, and that he considered the current project to be the “opening gateway to the School of Freshwater Sciences,” a $45 million investment by the Board of Regents of the UW System. The Barrett administration has put together over 500 acres of brownfield development, he said.

These complex projects call for some degree of city financing, which is where the Tax Incremental District comes in, he said. “There is more [TID] financing on a per-acre basis than any that has been done,” he said of the brownfield developments.

As the event unfolded, the Amtrak Hiawatha passed by going north, and then returned south to Chicago shortly thereafter. Its tracks are on a raised bed some 20 feet above the project site, and immediately to its east. The passenger traffic was punctuated by freight trains, and then again by passenger rail when the westbound Empire Builder made its stately way to Seattle.

Marcoux noted the activity on the tracks. “Eight hundred thousand people on the Hiawatha pass right by this site every year,” he said.

For many miles, the train passes by abandoned factories like the Milwaukee Solvay Coke plant just to the south. But now, passengers will have something new and vital to look at as they speed by.

“Milwaukee is better at adaptive reuse than any place in the United States,” confidently said the man who is largely responsible for Milwaukee’s adaptive reuse.

Marcoux went on to declare “It’s a great day in Milwaukee!”

Barrett offered a wry joke for the throng: “There have been a few bumps along the way,” he said, surveying the barren terrain, and this is to be expected, he noted. “There is a lot of gravel here.”

Photos from the Ground Breaking 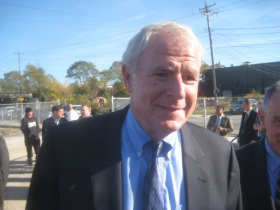 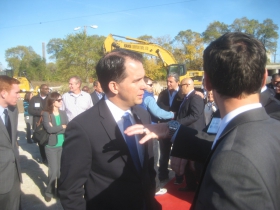 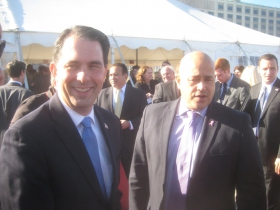 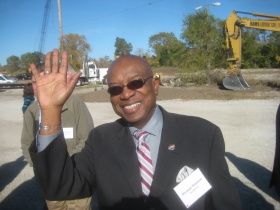 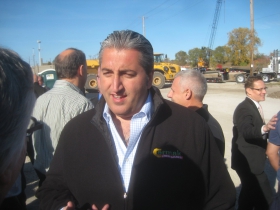 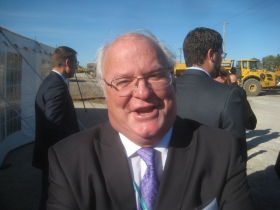