By Dee J. Hall and Tara Golshan, Wisconsin Center for Investigative Journalism - Sep 21st, 2015 09:26 am
Get a daily rundown of the top stories on Urban Milwaukee

In 2012, Kohl’s Corp. was awarded up to $62.5 million in tax credits from the Wisconsin Economic Development Corp., in part to build a new headquarters and expand its Wisconsin workforce by 3,000 workers. But disappointing sales figures caused the company to pull back, instead opting to acquire and renovate space near the existing headquarters. The company also has created just 473 of the 3,000 jobs it plans to add. Photo by Tara Golshan of the Wisconsin Center for Investigative Journalism.

On the presidential campaign trail, Gov. Scott Walker told the story so often it became fodder for comedian Jimmy Fallon. Walker buys a shirt at a Kohl’s department store for next to nothing, thanks to a deeply discounted price and his wife’s Kohl’s coupons.

“Tonette usually is with, and she’ll reach into her purse and pull out the Kohl’s Cash,” Walker is fond of saying. “And next thing you know, they’re paying me to buy the shirt.”

The line gets a knowing chuckle from the audience. After all, who doesn’t like a good deal?

Walker has used that story, along with references to carrying brown bag lunches and riding a Harley-Davidson, to portray himself as a regular guy who just happens to be seeking the Republican nomination for president.

It’s about the $62.5 million package of tax credits given to Menomonee Falls-based Kohl’s Corp. — the biggest state subsidy for creating jobs under the Walker administration — that three years later isn’t generating the promised jobs or capital spending.

The deal allows Kohl’s to collect tax credits annually for each created job that meets certain criteria — even if that position vanishes after a year.

The Wisconsin Economic Development Corp. later tightened its guidelines to require that companies must retain jobs for five years to receive tax credits, the Wisconsin Center for Investigative Journalism has found.

So far, Kohl’s has earned nearly $6.7 million in tax credits for creating jobs, WEDC spokesman Kelly Lietz said. Taking into account the net total of 473 newly created jobs that remain since the contract was awarded in 2012, that amounts to a cost to taxpayers of about $14,000 per job.

The award to Kohl’s, which was aimed at helping it build a new $250 million headquarters and add 3,000 jobs in Wisconsin, was done without the normal financial scrutiny the quasi-public WEDC gave to most of its other deals, the agency has acknowledged.

Enterprise zone tax credits like those received by Kohl’s are designed to provide incentives for expansion of existing businesses or relocation of “major business operations” from other states to Wisconsin.

Lietz defended the subsidies, noting that the previous administration under Democratic Gov. Jim Doyle also offered incentives to Kohl’s, a leading national retailer with 1,164 stores, including 40 in Wisconsin.

“As one of Wisconsin’s largest employers and one of the state’s fastest-growing companies over the last 30 years, Kohl’s has received a number of awards from the state during the administrations of governors of both parties,” Lietz said in an email.

At least one of the awards from the Doyle administration previously raised questions. The Milwaukee Journal Sentinel reported in 2007 that Kohl’s got a $4.15 million subsidy from the former state Department of Commerce even though it created just one-fourth of 1,000 promised new jobs under the deal.

WEDC spokesman Steven Michels said some of those jobs didn’t meet the minimum qualifications for the tax credits — which are limited to full-time positions paying at least $30,000 a year plus benefits — and aren’t included in the calculation of job growth.

Walker spokeswoman Laurel Patrick declined to comment on the Kohl’s deal except to note that any company failing to fulfill terms of its contract could be subject to clawbacks or denial of tax credits.

However, the Legislative Audit Bureau found in May that as of 2014, the agency “did not have procedures for recovering previously awarded tax credits from recipients that did not meet contractual obligations, and it did not consistently act in a timely manner to recover tax credits.” Michels said such a policy has now been developed as each deal closes out.

“We will assess the performance of an awardee, and we will make recommendations for any penalties or clawbacks as part of that process,” he said.

The audit and a recent legislative hearing revealed that until just a few months ago, the 4-year-old agency failed to fully verify the number of hours worked and wages earned by employees of companies that got taxpayer subsidies from WEDC. But Michels said Kohl’s has submitted detailed payroll records for each of the years it qualified for job-creation tax credits.

Kohl’s is among 24 companies that got at least 28 awards after a lack of formal review of the financial viability of the projects and soundness of the companies by the agency, which was created by Walker in 2011 in an ultimately unsuccessful quest to create 250,000 private-sector jobs in four years. Michels said the awards were made in the agency’s first 15 months of existence before staff reviews were required for all deals.

WEDC disclosed the lack of staff reviews this summer after the Wisconsin State Journal reported that it did not fully investigate a failing Milwaukee construction firm owned by a major Walker donor that left taxpayers on the hook for a $500,000 unsecured loan that created no jobs. 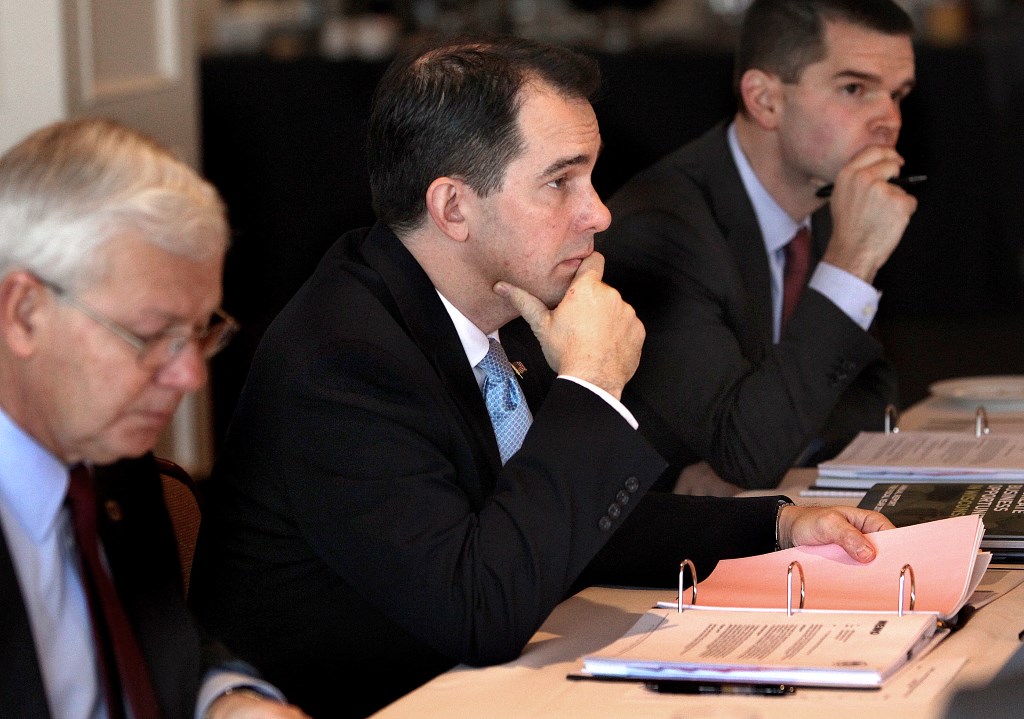 Gov. Scott Walker, then-chairman of the Wisconsin Economic Development Corp., participates in a WEDC board meeting in late 2013 in La Crosse along with CEO Reed Hall, left, and then-chief operating officer Ryan Murray. Walker removed himself in July as chairman of the board after a negative audit and critical news coverage of the job-creation agency. Murray has left the agency, and Hall will retire in September. Hall’s replacement is longtime banker Mark Hogan. Photo by Peter Thomson of the La Crosse Tribune.

Nearly half of the $126 million awarded without thorough financial scrutiny went to Kohl’s. Like Walker’s deeply discounted shirt, the Center found the three largest deals awarded without full financial review also were very good deals — for the companies.

WEDC’s contracts with Kohl’s; Plexus Corp., a Neenah custom manufacturer; and Kestrel Aircraft, a Superior airplane manufacturer, don’t specify how long jobs created with taxpayer subsidies must be retained. Michels said the agency changed the rules in 2014 to require that future enterprise zone credits be awarded only for jobs retained for at least five years.

The Plexus deal also set the number of existing jobs the company must retain at hundreds less than the number of jobs they already had — meaning it could shed employees while still claiming job-creation credits. (A similar enterprise zone deal that would have allowed Ashley Furniture Industries of Arcadia to get $6 million even if it laid off half of its workforce was reported to be scuttled in March after details were revealed by the Wisconsin State Journal.)

The Plexus contract with WEDC requires the company to retain 1,000 jobs, but Plexus already had at least 1,792 employees, according to the WEDC database. Plexus bills itself as a “product realization” company that transforms others’ concepts into products and delivers them to target markets.

Without naming the company, the Legislative Audit Bureau highlighted the Plexus deal as one that violated state law. Auditors found that in 2013-14, the company qualified for $517,000 in job-creation tax credits in even though its workforce shrank by 307 employees. A spokeswoman for the manufacturer did not respond to several messages seeking comment.

Michels said since 2012, Plexus has added more than 300 employees in Wisconsin — nearing its target of creating 350 jobs — and now reports having 2,327 employees.

“As is the case with any large company, there are going to be fluctuations in employment over the years, but this is a long-term incentive to help a global company with over 12,000 employees establish a state-of-the-art operations center that cements the Fox Cities as Plexus Corp.’s headquarters,” Michels said in an email. “The company has until 2019 to meet its overall deliverables. The Fox Cities, however, will benefit from Plexus’ investment for much longer.”

WEDC board member Sen. Julie Lassa, D-Stevens Point, said the board was unaware WEDC staff had not fully evaluated some deals in the early months of the agency. Lassa said she and fellow Democratic board member Assembly Minority Leader Peter Barca of Kenosha have been forced to file open-records requests to get information from the agency they are charged with overseeing.

“We were given one paragraph of information about each of the deals,” Lassa said. “Again, without seeing the underwriting documents involved in these plans, we can’t know how WEDC staff assessed these deals at the time. We relied on WEDC staff to provide us with the information we needed to make sound decisions.

Michels countered that most of the deals — which were struck before the agency adopted a policy in 2013 requiring staff reviews on all projects — have turned out well. Michels said 10,000 jobs have been either retained or created, and the awards have spurred capital investment of “close to $500 million.”

On Tuesday, Barca and Lassa called for establishment of a state “Department of Economic Opportunity” to replace WEDC, which Lassa labeled as “irretrievably broken.”

“Our new agency will remove opportunities for cronyism and address outsourcing concerns by requiring that a company retain its employment levels and that the state reclaim taxpayer money if companies don’t meet their commitments,” Lassa said.

WEDC board member Sen. Rick Gudex, R-Fond du Lac, announced Wednesday he planned to hold a series of five informational hearings around the state for the Senate Economic Development and Commerce Committee to hear ideas from local business leaders and economic development officials about “things the Legislature can do to assist job creators.”

The ending to this Kohl’s story has not yet been written; the company has until 2023 to claim all of its tax credits.

But some key parts of the plot are already known.

Kohl’s, which suffered through several years of stagnant sales growth, did not build a new $250 million headquarters. Instead, it acquired and renovated space near its main office northwest of Milwaukee, so far saving more than $100 million in capital costs — and spending far less than promised.

The Kohl’s deal was signed by Paul Jadin, then-CEO of the state’s economic development agency. He said he was “stunned” when Kohl’s failed to follow through on its plan to build a new headquarters, “because I know how much time and effort went into that search.”

4 thoughts on “Jobs Lacking After State Subsidy of Kohl’s”