For much of the twentieth century, Wisconsin Avenue was the entertainment and retail center of the city. 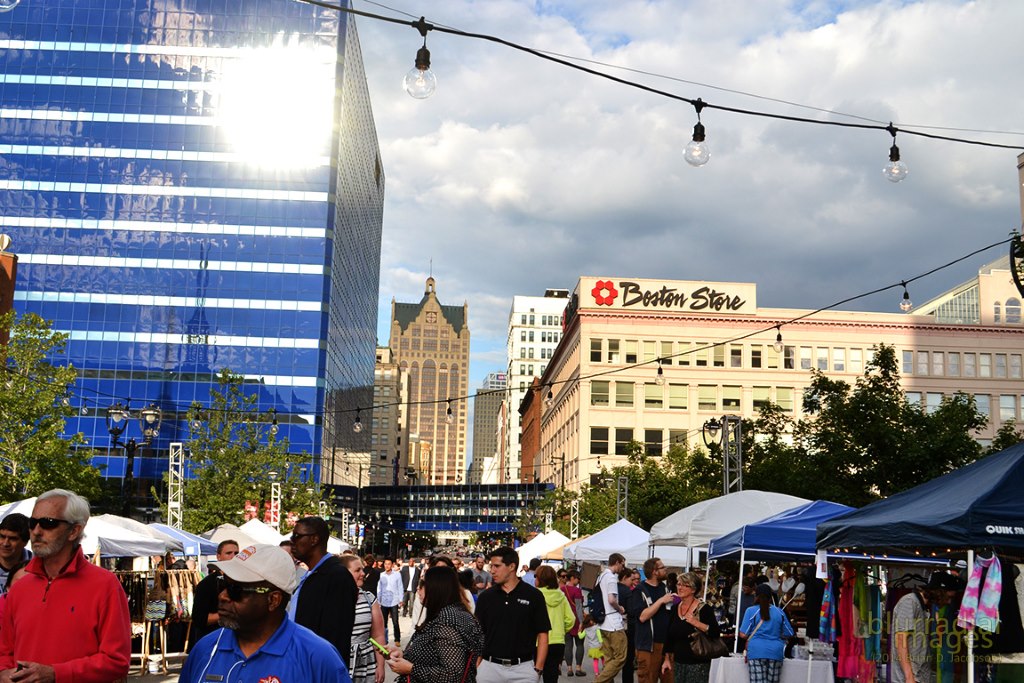 When Kilbourntown developers planned Spring Street (W. Wisconsin Avenue) in 1835, the future street was a wild rice marsh from the Milwaukee River to just past what would become N. 4th Street. There, part of a Potawatomi village was set up at the base of a steep fifty-foot bluff, with the rest of the community living above the bluff.

Three years later, the federal government moved the native inhabitants west of the Mississippi River to make room for white settlers. Then the city-making began. The bluff was taken down with the resulting materials used to fill in the wetlands below. One Tory Hill worker, an Irish immigrant named Owen Powderly, was killed while working on the bluff removal. Part of it collapsed on him and his team of horses, killing them and injuring several other workers. By the late 1840s, the bluff was down, the swamp was raised, and the road ran up the Spring Street Hill and to the west.

On the other side of the river, in Juneautown, the road was known as Wisconsin Street. There was much less work to be done there, just a small bluff that needed to be removed and a ravine between Jackson and Van Buren Streets that had to be filled.

These improvements did not immediately make Wisconsin/Spring Street the main street it would become. For example, when the Civil War ended in 1865, thousands of residents celebrated the event on N. Water Street, the main commercial artery at the time.

In 1876, some citizens petitioned the Common Council to change the name of Spring Street to Grand Avenue. There was some resistance to the idea, as there always is to change. Some opponents said calling it “Grand” would not make it so. Others, taking a shot at the wealthy, influential petitioners, stated that maybe it should be named “Snobby Avenue.” But in a city where new proposals are discussed seemingly forever, the Council approved the new name in less than a month after receiving the petition.

The next change would not be so easy. In 1913, a committee of the Common Council was formed to study the problems caused by the willy-nilly naming of streets by developers. Some streets had several names along their lengths and there were many duplicate names and even a few triplicates. This situation created problems for letter carriers, deliverymen, and anyone unfamiliar with their destination.

Wisconsin Street/Grand Avenue was slated to have only one name and what it was to be was argued ad nauseam. World War I came and went. That war’s victory parade ran down Grand Avenue and Wisconsin Street, a sign that the thoroughfare was the number one street in the city. Finally, thirteen years later, on December 20, 1926, primarily over the objections of the merchants of Grand Avenue, the street was renamed Wisconsin Avenue.

For much of the twentieth century, Wisconsin Avenue was the entertainment and retail center for the city. It also became its heart. When thousands of ecstatic residents wanted to share their happiness when World War II ended, and when the 1957 Milwaukee Braves won the World Series, Wisconsin Avenue is where they came to celebrate. But city residents flocked to the suburban areas in the 1960s and new shopping malls and theaters were built there to serve them. Stores and theaters closed on Wisconsin Avenue and downtown became nearly deserted. The street is making a comeback now as is the entire downtown area.

Wisconsin Avenue was, of course, named for the state, which in turn was named for the Wisconsin River flowing through it into the Mississippi River. It is from a Native American language, although which one is not known, and its meaning, in spite of the numerous interpretations and spellings that have been offered, is uncertain.

As is befitting the city’s main street, many of Milwaukee’s most impressive buildings are on Wisconsin Avenue. There are too many to try to describe or even to enumerate in this column. They can be seen in all their glory on a walk down the avenue. The walker can learn about Milwaukee’s history and the background of some of its buildings by reading the historical markers and historic kiosks. Sculptures and statues of ducks, camels, soldiers, and saints among others are on display. Public art, like the animation of Janet Zweig‘s “Pedestrian Drama,” and the recently installed Reggie Baylor mural “The Answer to the Area…A.) Persons B.) Places C.)Things D.) All of the Above E.) None of the Above.” are also points of interest.

When Wisconsin Avenue crosses the Menomonee River Valley it enters a residential area. At Hawley Road it begins its run through western suburbs except for a section between N. 87th and N. 95th Streets that is part of Milwaukee. After that, the street leaves the city permanently. 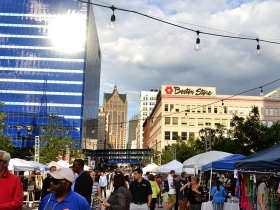 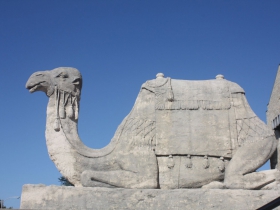 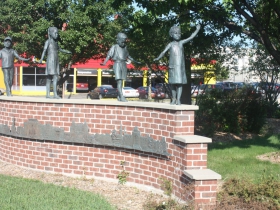 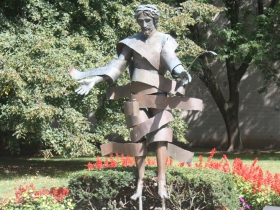 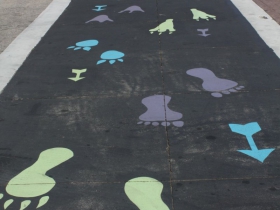 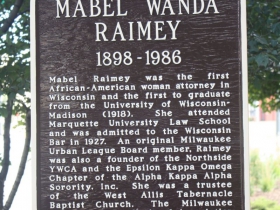