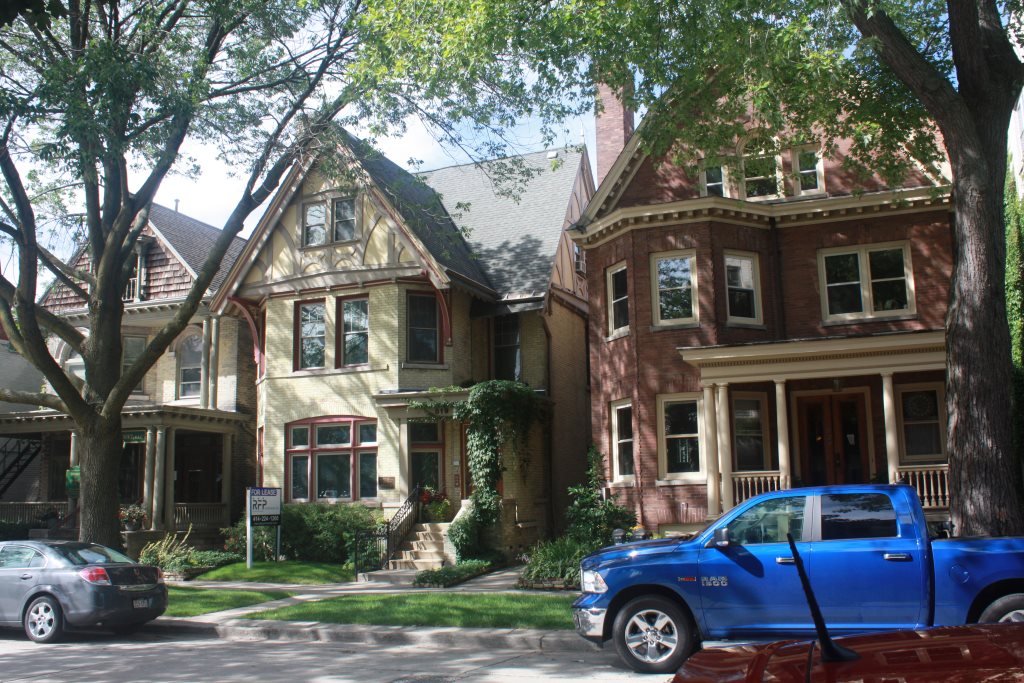 Cass Street is not that long, stretching only 13 blocks. It runs from E. Michigan Street to N. Water Street, with an interruption between E. Wisconsin Avenue and E. Mason Street caused by the Northwestern Mutual complex. Cass Street is predominately residential, lined with many apartment buildings and a few older mansions in the Yankee Hill section, then with more modest dwellings farther to the north.

One former mansion on the street was the home of the wealthiest man to ever live in Milwaukee. A man whose riches, as calculated by his percent of the gross national product, exceeded the fortune of Microsoft’s Bill Gates. This was Philip Danforth Armour, who came to Milwaukee around 1857 at age 25.  He lived in a boardinghouse on Spring Street (W. Wisconsin Avenue) and started a grocery business. During the Civil War, Armour teamed up with John Plankinton to form the Plankinton and Armour meatpacking company. When Armour sensed the end of the war coming and the resulting fall of pork prices, he made as many contracts as he could with Army pork suppliers at the prevailing higher prices. When the war ended, pork prices fell and he was able to fulfill his high-priced contracts with low priced pigs.

The coup netted the company over a million dollars and skyrocketed the business to the next level, allowing it to expand to other cities. In the late 1870s Armour moved to Chicago, where he eventually formed his own business, Armour and Company. He died there in 1901.

Armour’s Cass Street home passed through the hands of several well-to-do families over the next few decades until the Radium Hospital opened there in 1914. The facility advertised that it was “Located in the aristocratic portion of Milwaukee in what was formerly one of Milwaukee’s finest homes.” The hospital treated “cancer and other morbid growths.” Radium was very expensive and the hospital owned one-eighth of the world’s supply. The nurses who handled it were required to be bonded for losses up to $100,000. The site is now occupied by an apartment building.

While the Radium Hospital offered the latest advances, older health care solutions were still being tried. One Cass Street man had a variety of problems in 1919. His stomach bothered him, he was constipated and tired, and he had rheumatism. Enter the cure-all Tanlac, a tonic that was undoubtedly high in alcohol. After the first bottle, the Cass Street resident said “There was a big difference in my feelings.” All his ailments were cured, he said, “After five bottles I was just like a new man.” 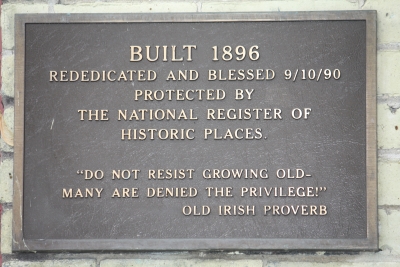 “Do Not Resist Growing Old – Many Are Denied The Privilege.” Photo by Carl Baehr.

According to the marker on the building at 819 N. Cass street, the structure is listed on the National Register of Historical Places. Built in 1896, it is an example of the Elizabethan Revival style. The marker includes an old Irish proverb: “Do Not Resist Growing Old – Many Are Denied the Privilege.”

In 1884 the Milwaukee Sentinel reported horrid odors coming from a barn on Cass Street just north of E. Wisconsin Avenue. An investigation determined there was a “tannery” at the site. The hides of dogs and cats were being dried on the barn’s roof. The newspaper speculated that there may have been other dog and cat tanneries in the city but not in such an “aristocratic neighborhood.”

There was some excitement at the Cass Street Playground in the spring of 1947. Young Sam Micale had broken his arm two months earlier but had taught himself to shoot marbles left handed. More than 1,400 Milwaukee boys competed in the city-wide marble shooting competition and Sam made it to the final four, representing the Cass Street Playground. He lost to the almost unbeatable Vitensio Prado, who won his sixth city championship in seven years representing Vieau playground.

The Cass Street Playground covers the whole city block bordered by N. Cass, E. Kewaunee, N. Marshall, and E. Pleasant Streets. In 1998 local parents decided that some green space was needed in their neighborhood. Through their efforts, $150,000 was raised to turn one third of the asphalt playground into a green space. A tot lot was installed, park benches and picnic tables were added and 17 trees were planted. Artist Marina Lee created colorful fiberglass sculptures to enliven the scene. Seventeen years later it is obvious the project is a big success.

Cass Street was named for Lewis Cass, who was the governor of the Michigan Territory, which included Wisconsin from 1813 to 1831. When Solomon Juneau and Morgan L. Martin named the street in 1835, Cass was serving as President Andrew Jackson‘s Secretary of Defense, then known as Secretary of War. He represented Michigan in the U.S. Senate for four years until 1848, when he ran as the Democratic candidate for president, losing to Zachary Taylor. Cass, who was born in New Hampshire in 1782, served as Secretary of State from 1857 to 1860. He died in 1866 and is buried in Detroit, Michigan. 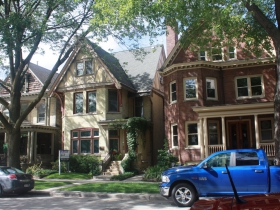 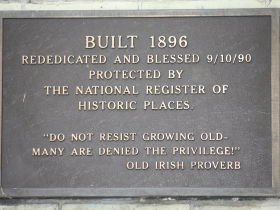 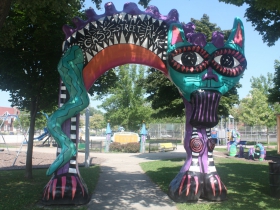 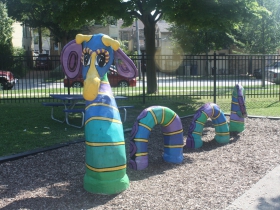 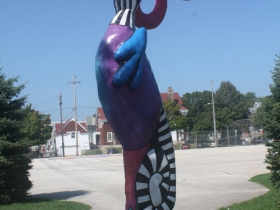 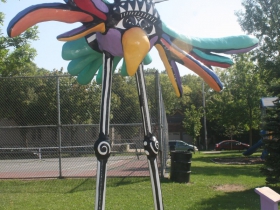 One thought on “City Streets: Cass Street, the Avenue of Plutocrats”