It was once Detroit and Fowler Streets, and before that was under water. 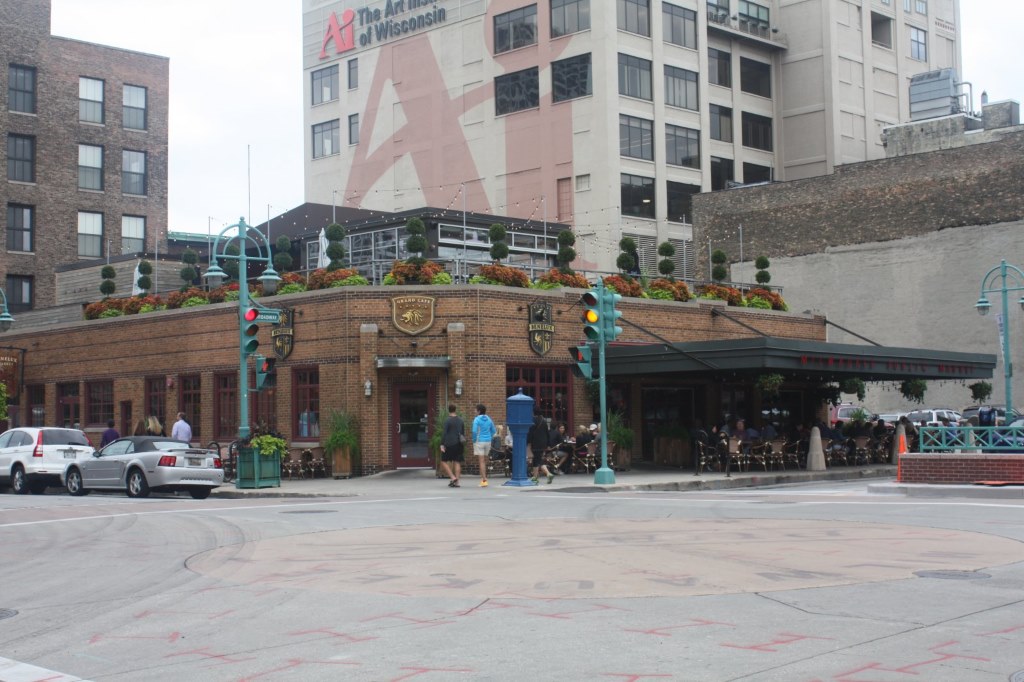 St. Paul Avenue was once called Detroit Street east of the Milwaukee River, and Fowler Street west of the river. It used to be located in marshy land that was sometimes under water. During the first decades of the city’s history, the streets were filled in to bring them above water level.

Early maps of the city show that Fowler Street ran west from the river to N. 6th Street, where a bluff blocked its progress. The street picked up again on the other side of the hill at N. 8th Street and continued westerly along the floor of the Menomonee River Valley. Fowler Street was the namesake of Albert Fowler, who claimed to be the second white man (after Solomon Juneau) to settle in the city when he arrived in 1833. While Fowler, a Massachusetts native, was only second on the white man list, he was number one on many other lists: Milwaukee’s first post office clerk, first court clerk, first register of deeds, first justice of the peace, and the first to purchase land in the city. Nineteen years after arriving in Milwaukee, he left for Rockford, Illinois, where he served three terms as mayor before dying there in 1883 at the age of seventy.

In 1889, the portion of Fowler Street west of N. 8th Street was renamed St. Paul Avenue. The street was named for the Chicago, Milwaukee, St. Paul and Pacific Railroad, whose tracks and freight yards ran alongside it. The company was a major employer in the city for many decades and was at one time referred to as the St. Paul Road. It started as the Milwaukee and Waukesha Railroad and had its inaugural run of 20 miles between those cities on February 25, 1851. During the next five decades it added more than 11,000 miles of track, reaching all the way to the Pacific Ocean at Seattle in 1906. The railroad went through many name changes over the years, being most familiarly known as the Milwaukee Road. In 1986, the Milwaukee Road merged with the Soo Line Railroad and ceased to exist under the Milwaukee name.

Detroit Street was named by Juneau and his business partner, Morgan Martin, in 1835. They named east-west streets, in what would become the Third Ward, with a Great Lakes theme. Starting with Wisconsin, the streets were named Michigan, Huron (now Clybourn), Detroit, Buffalo, and Chicago. In 1856 Erie Street was added to the group.

In the mid-1960s, when freeway construction eliminated the gap between Fowler Street and W. St. Paul Avenue, the two block section was paved and the two streets became one. At the same time a bridge was built over the river, connecting W. Fowler and E. Detroit Streets. The city policy by then was that a street could have only one name. St. Paul Avenue was the name chosen, consigning Detroit and Fowler to street name history.

From the bustle of pedestrians in the Third Ward and the activity at the Milwaukee Intermodal Station at N. 5th Street, to the deserted and pedestrian-unfriendly street west of the I-94 underpass, to the residential areas west of  N. 27th Street, St. Paul Avenue is a study in contrasts.

In the Third Ward at N. Broadway is the former Broadway Produce building which was placed on National Register of Historic Places and is now home to Cafe Benelux. Across the street, the building occupied by The Wicked Hop is the only remaining structure on E. St. Paul Avenue that was there before the Third Ward Fire of 1892.

Markers on the bridge that crosses the Milwaukee River show it was opened in 1966 and won an award for the “Most Beautiful Steel Bridge-Movable Span” by the American Institute of Steel Construction in 1967, and that it was rehabilitated in 2014. Two small parks along the street, one at N. Water Street, and the other at N. 2nd Street, have turned two empty lots into pleasant green spaces.

Beyond the Intermodal Station and the Marquette Interchange, the street deteriorates into an industrial area with many empty buildings and sidewalks blocked by overgrown vegetation and docked trucks. In one case, a fence closes the sidewalk for no apparent reason and, based on the weeds growing in the sidewalk cracks, it has been there for some time.

A few businesses have attempted to spruce up the street, among them the Brass Light Gallery, with colorful murals on the windows with greenery below them. In front of the Potawatomi building at N. 13th Street is a gateway monument to the Menomonee River Valley that was donated by the Forest County Potawatomi. At N. 19th Street, Sobelman’s Pub & Grill has provided a pleasant place for its outdoor diners.

As St. Paul Avenue climbs out of the Menomonee River Valley it crosses N. 27th Street, and runs through the residential neighborhoods of Merrill Park and Piggsville before it stops at the Menomonee River at N. 42nd Street. It goes through two more residential areas as it resumes for four blocks at Hawley Road and then again for four more blocks at N. 91st Street. There it finally ends. 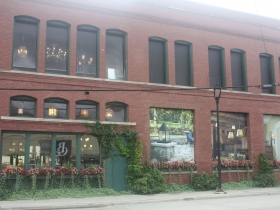 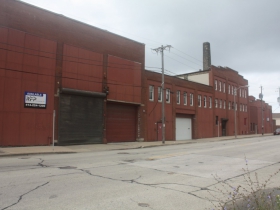 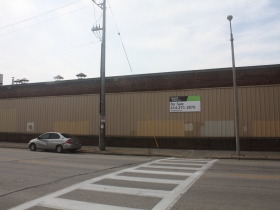 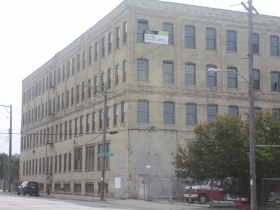 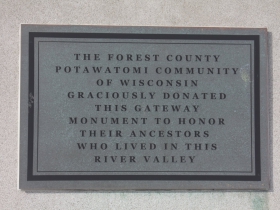 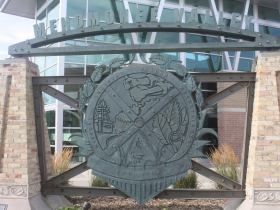