Hi Hat Garage Is Quite a Scene

One of the best deals in town: half-off taps, rail mixers and wine. 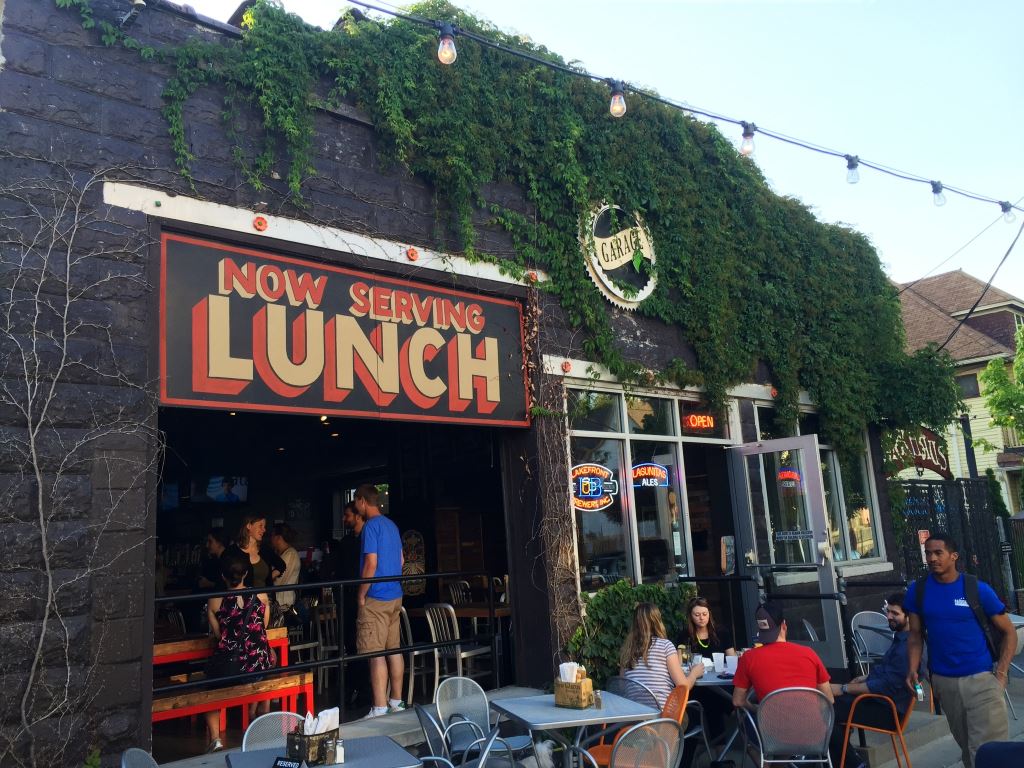 Saturday was the Brady Street Festival, a nine-block stretch of people, music, vendors, BMX biking, beer, wrestling and more cheese than you could fit on a stick. Highlights from the four stages at one of Milwaukee’s most storied street festivals included live performances by Whips, Klassik, Dream Attics, Lex Allen with New Age Narcissism, and the Hell on Heels Drag Show. No stormy weather or “lion-like” animals spoiled the fun. In advance of Saturday’s festivities I visited one of Brady Street’s most beloved bars, Hi Hat Garage (1709 N. Arlington Pl.), to sample their happy hour (3 p.m. to 7 p.m., M-F).

Hi Hat Lounge was technically closed when we arrived for happy hour but the adjacent Garage was open for business, with lots of outdoor seating up and down Arlington. Those sitting on the wide wood tables inside could still feel fresh air thanks to the, ah, garage door being opened. Simply put, Hi Hat Garage has one of the best happy hour deals in town. It features half-off all taps, rail mixers and wine.

The draft selection includes 16 different beers (and Crispin cider) from around the Midwest, regularly $4-$6. I tried a snifter of the Great Lakes Erie Monster, a 9.1 percent Imperial IPA that packs a flavor punch. Later I ordered a pint of Point’s limited release Whole Hog series Nitro Espresso Stout, which is my new favorite coffee beer. Rarely do you find roasted bean brews on tap and never for $3! Rail mixers and glasses of wine are another ridiculous deal at $2.50 each. They carry seven different Barefoot brand California wines. 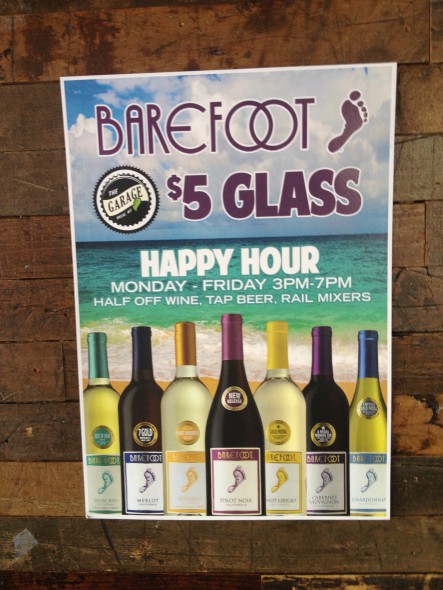 Hi Hat’s $8 homemade ramen (Wednesday food special) was tempting but considering the Summer heat I had to pass on the big bowl of soup. I was with a group of people and we sampled the chicken wings, firecracker shrimp, and Cajun-fried pickles. Personally, I prefer when pickles are fried as coins, but these spears were nicely seasoned and came with a tasty Great Scott Sauce. The Sweet Chili and Buffalo wings were the best flavors, but the watered down blue cheese sauce left something to be desired. The shrimp were my favorite of the apps, with a drizzle of sriracha on the plate, a chili pepper spice in the batter and a sweet chili sauce for dipping. Aside from the ramen, their other food specials are half-off burgers on Mondays, Cod Fish Fry and Perch Tacos on Fridays, and weekend brunch from 10 a.m. to 3 p.m., which includes $5 bloody mary’s and $6 mimosas.

The last time I went into the Hi Hat Garage was to meet Prescott Sobol, aka DJ Fuzzy Logic, on a Sunday night. I was greeted by a tipsy team of young ladies belting out Britney Spears in the karaoke corner. Hi Hat’s Sunday night karaoke is a great place for people watching and for drinking Wisconsin beers, which are $2 off. Hi Hat also participates in the Brady Street “Sunday Funday” with $5 Lakefront taps (currently IPA and Riverwest Stein) and a shot, plus you get to keep the cup. Anytime of week you can get a $5 “Tune Up,” a PBR Tallboy and a shot of Bulleit Bourbon. Their bottles and cans menu is robust, with almost 50 different domestic, craft and import beers, ciders, and gluten-free drinks.

Hi Hat also prides itself on their rotating craft cocktails ($8), which currently boasts five varieties. The “Trip to Garden Grove” looks the most promising, a blend of St. George Green Chili Vodka, Ancho Reyes chili liqueur, lime, celery bitters and mint sprig. At Brady Street Festival Fuzzy Logic hosted a DJ tent in the alley outside Rochambo and was able to wrangle about 20 of his DJ friends to spin the entirety of the festival. If you missed the mixing madness this weekend you can catch Fuzzy Logic DJing tonight at Fink’s starting at 10 p.m. and at the Hi Hat Garage on Fridays once or twice each month, also starting at 10 p.m. And come early any day of the week at the Garage for their fantastic half-off deals during happy hour.

One thought on “Weekly Happy Hour: Hi Hat Garage Is Quite a Scene”