Follow the action on (and off) the race course.

Welcome to the second annual Riverwest 24 live blog. My goal is to provide you almost up to the minute coverage of Milwaukee’s best bike race. The race runs from 7 p.m. on Friday to until 7 p.m. on Saturday.

Newest updates on top. Photos and post coverage on the bottom.

4:47 p.m. – Time to go talk trash to Champagne Diet at their People’s Park campsite, which also doubles as a parking space on Humboldt.

4:40 p.m. – Back from a sprint lap, which might have been my fastest yet. Unfortunately a flat tire prevented Jay from continuing (and besting) my speed.

3:13 p.m. – The discussion has turned to determining who is going to the Brady Street Festival afterward. Fifty percent of the people that say they’re going will drop out.

3:04 p.m. – The foster puppy that resides at the house we’re staying at has stole someone’s tooth brush and is running around the yard. That dog takes her oral hygiene seriously.

3:02 p.m. – Teammate reports seeing boobs on the course. When pressed for more information by a female member of our group, teammate replies “well, there was babies eating off of them.”

2:49 p.m. – We’ve determined Slide the City is a little too pricey for our tastes. $40 to go down a water slide three times seems a bit rich, even if it’s a unique experience.

2:28 p.m. – The womens’ team is filing a complaint about a bonus checkpoint ending early.

2:18 p.m. – PANCAKES looks too far behind to pull off a repeat victory. We ripped off the wrong team name. Looks like next year we’ll need some knock off of “Mid-West Amalgamation is in the mail.”

2:15 p.m. – We’re only three laps in front of the ladies’ team. Our lack of organization is not helping.

2:01 p.m. – Back at basecamp. Everyone seems to have adopted the goal of hiding from the sun as much as possible.

12:43 p.m. – Check it out, an actual traffic jam on N. Prospect Ave. One of the two days of the year such a thing happens (the other: Suburbs Day). 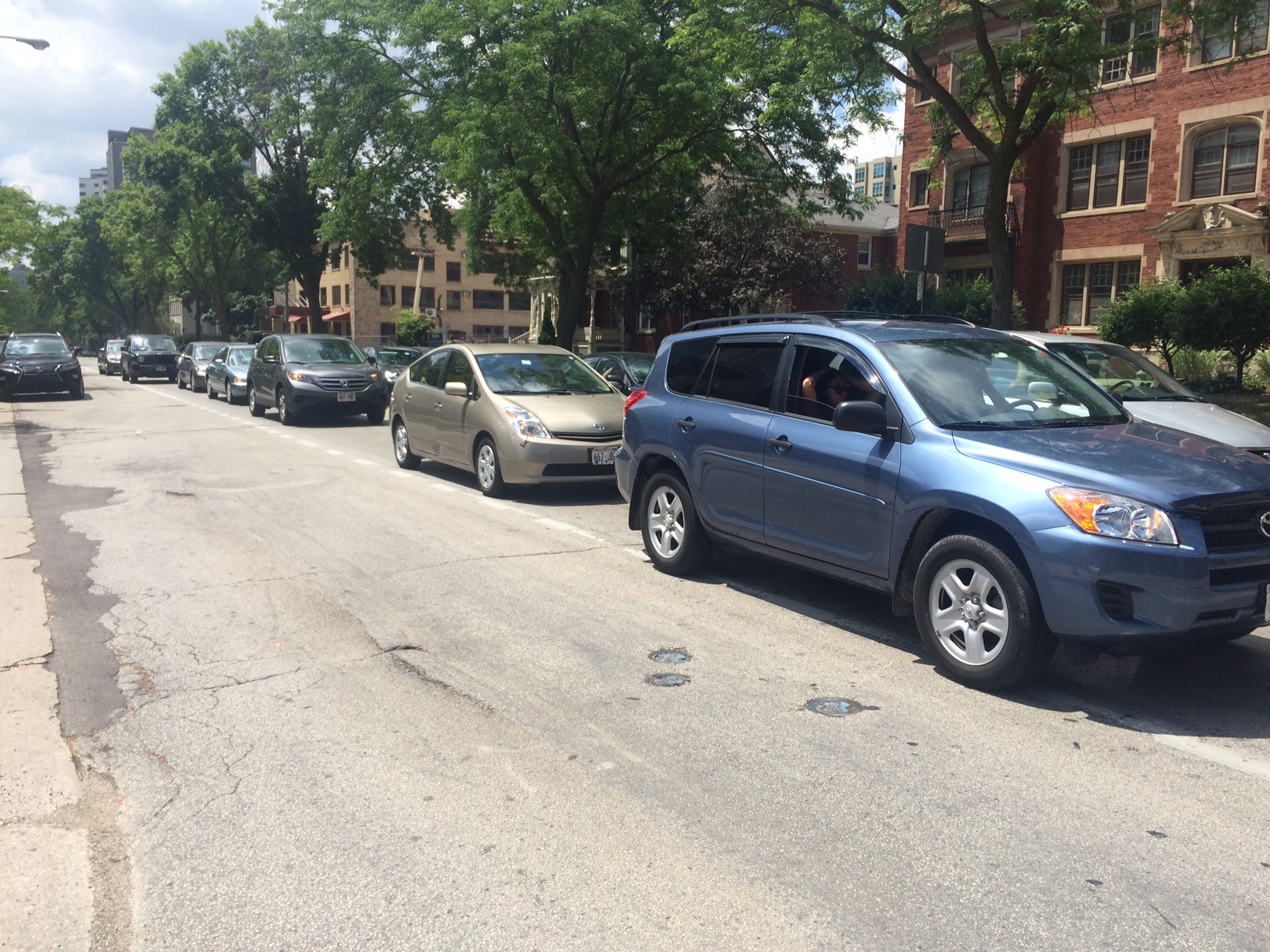 12:30 p.m. – I regret my decision to drive. E. North Ave. is at a complete standstill. Instead I am taking a super secret back way (Humboldt, Kane, Cambridge, Oakland) to our parking garage on N. Farwell Ave.

12:20 p.m. – I’m ducking out to go shower at home. Should be complete chaos to get there with the air show crowds, Brady St. closed and other general madness, going to attempt to drive (I will regret this decision).

11:38 a.m. – Here’s a map of everywhere I’ve been so far, including my bike ride from Urban Milwaukee HQ to the race course yesterday. I’ve put in 39.54 miles and seven laps. A lap is about five miles. You can see the bonus checkpoint that was way out west on N. 5th St. and W. Center St. 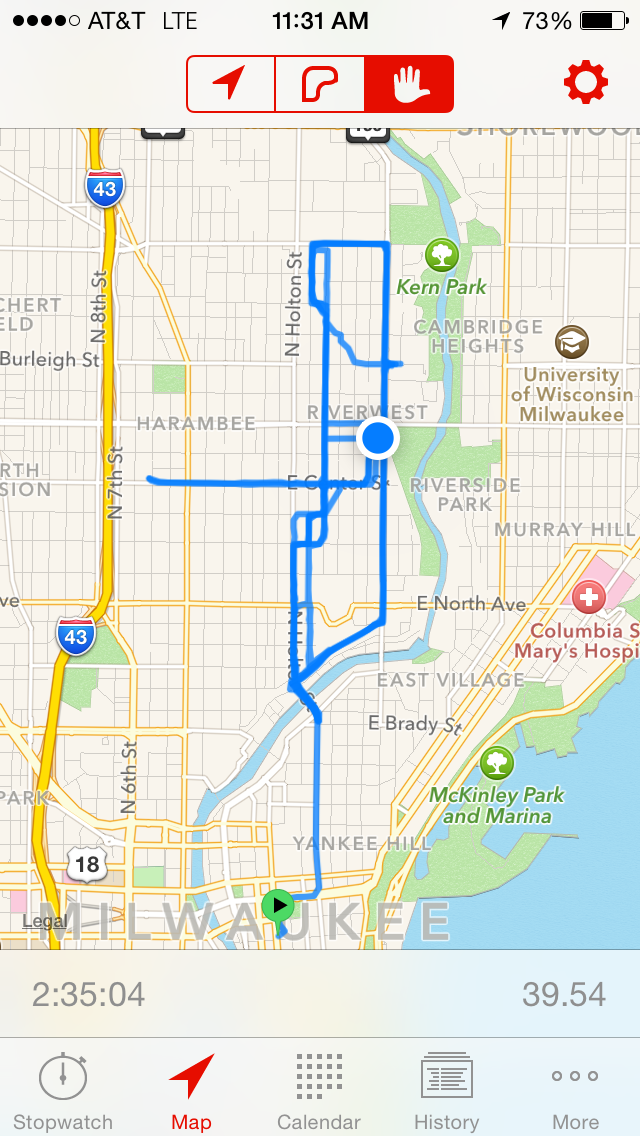 11:10 a.m. – Back from riding. It’s time to eat the food my teammates have graciously been grilling. We’re out of hot dog buns, so it looks like it’s time for a Heart Attack Burger. That’s a bratwurst and burger on the same bun.

10:46 a.m. – I roll into the Throttle Twisters motorcycle club for a bonus checkpoint. I learn that I’m going to be decorating my bike and dancing to a song of my chronologically assembled group’s choice. We pick a Jack Black song that the DJ doesn’t have, despite promises “we have the internet, we have everything.” Their suggestion? Ring My Bell by Anita Ward. The two female dancers in our group are infinitely better dancers than I am. They also are better at decorating their bikes. 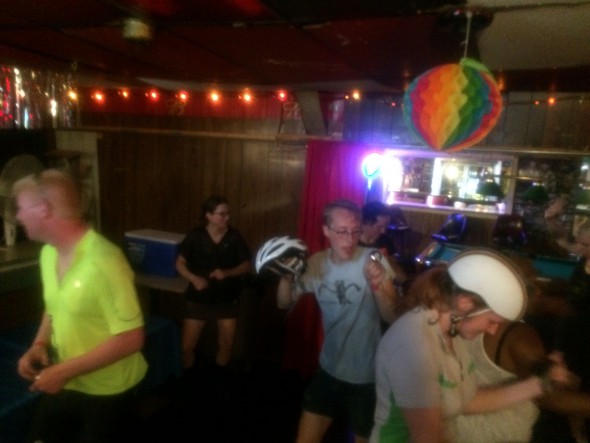 9:29 a.m. – I’ve got to give up to Champagne Diet. They’re destroying us by 9 laps and an extra bonus checkpoint at this point, and they don’t even use the Booth Street Staircase cheat (described earlier). 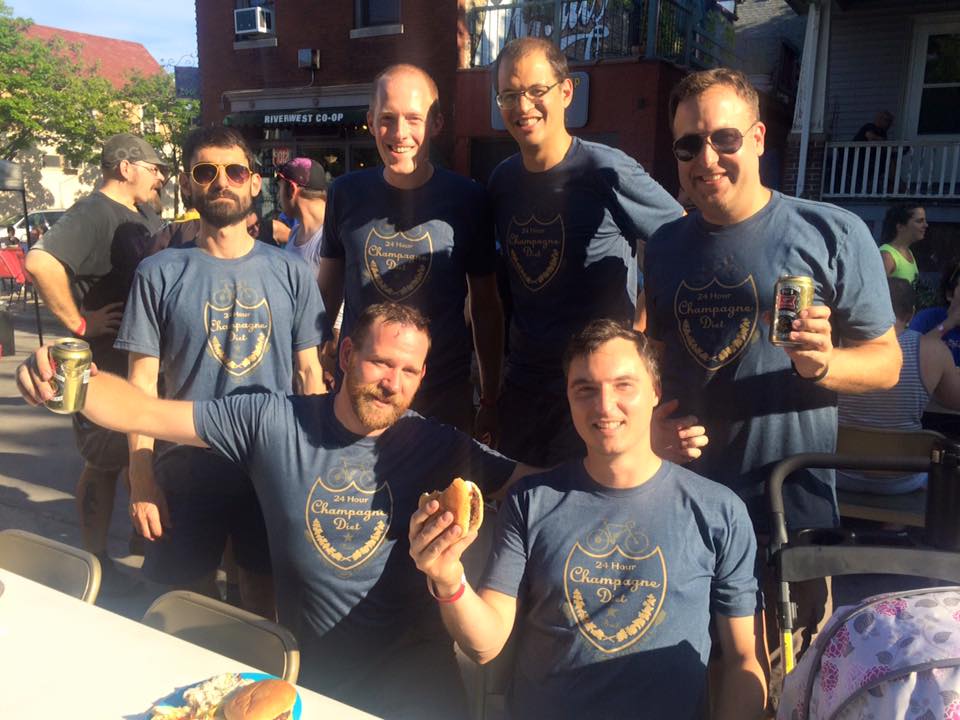 9:14 a.m. – Just looked at the standings. Ouch. We’ve had some disasterous laps. We’re only two points in front of the women’s team.

8:58 a.m. – I’ve learned that my teammates temporarily lost the manifest in the campsite during a rider switch.

5:07 a.m. – Watched the sun rise from the top of the Kilbourn Reservoir. It’s coincidentally a bonus checkpoint for teams. 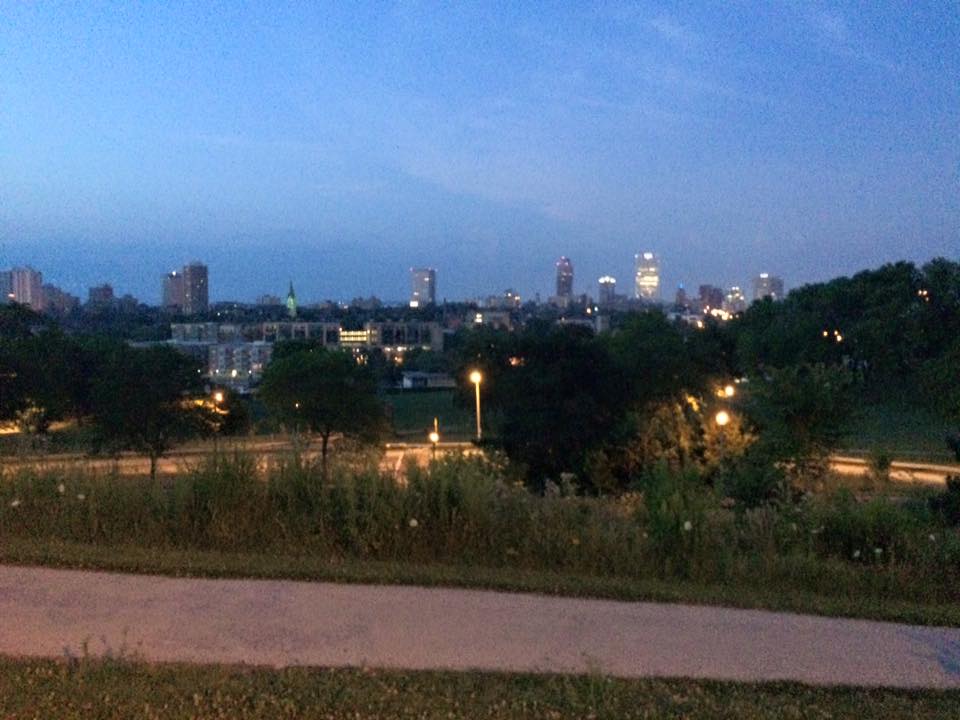 3:30 a.m. – Members of the Underwear Bike Ride begin rolling through my volunteer intersection. They’re not tightly together like the other non-RW24 underwear rides.

2:21 a.m. – Marina Dimitrijevic is stepping down as County Board chairwoman? She must have got Working Families job. So ends my political coverage as part of my Riverwest 24.

2:00 a.m. – Can’t find my volunteer shift location. Going to need to track that down in short order.

1:43 a.m. – Hearing stories about an accident heading downhill on N. Humboldt Ave. towards E. North Ave. It sent a rider to the hospital that did everything right, short of avoiding a rider that improperly followed a call of “on your left.”

1:42 a.m. – Jason McDowell at OnMilwaukee.com has produced this fun video using a camera on his head. It’s part of an article on the race.

1:31 a.m. – Submitted that pothole to get fixed. If you want to track it, follow along.

1:10 a.m. – Three laps down and I’m back at basecamp, a tired and sweaty man. I managed to hit the pothole of all potholes on my second lap.

10:58 p.m. – The Champagne Diet team (which has a Twitter account worth following) captured a photo of the crazy tri-level cycle on the course. It’s unreal. 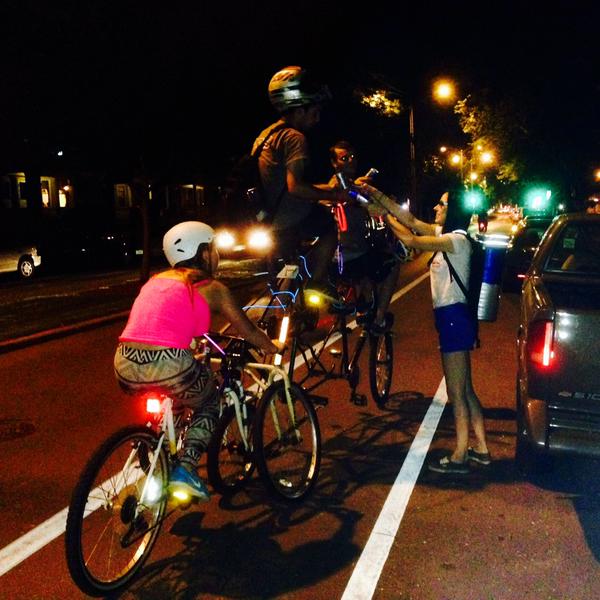 10:34 p.m. – We’re tied with the City Haulers team, which consists of a bunch of city government big wigs. This is a good sign for us.

10:32 p.m. – The no fireworks rule is being violated to an alarming extent in the last five minutes.

10:30 p.m. – Mariiana has returned from a casual tour of the course. The party at the Marsupial Bridge is alive and well. 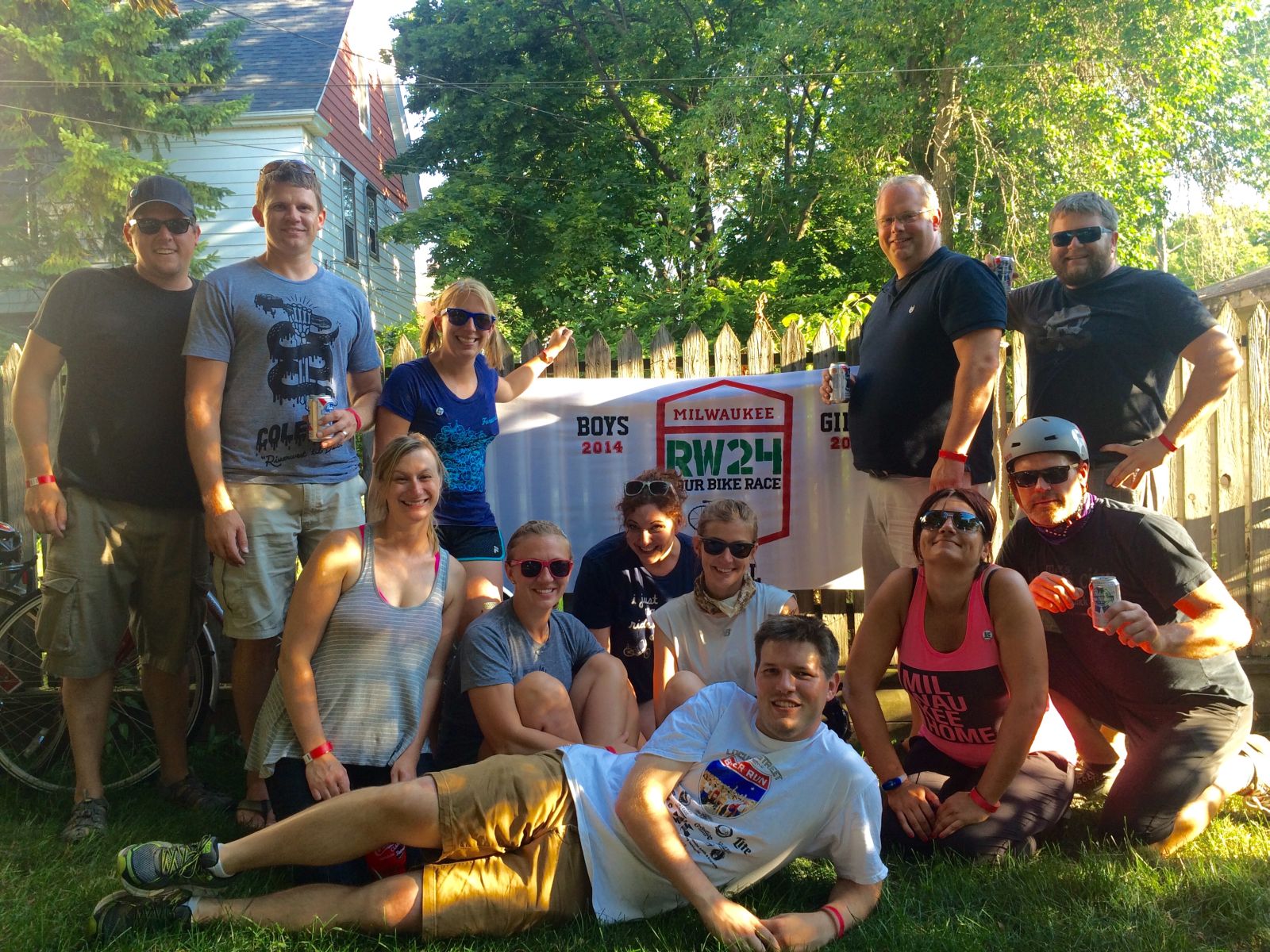 10:15 p.m. – Colectivo on Humboldt is again offering up free espresso shots for 24 hours via a sidewalk bar. I’m also told that Fuel Cafe is giving away free tea as long as the temperature stays up.

10:05 p.m. – Chris has just finished a 24 oz Smirnoff Ice that he was challenged to drink. Only took him three hours.

9:50 p.m. – Dave is back, we’re through five laps and four bonus checkpoints. Dave also has a hair cut via one of the bonus checkpoints that is being described as the “victory” cut. He’s got a large V shaved into the back of his head.

8:26 p.m. – It’s time to go pick up the Qdoba nacho bar Alison won earlier this year. The perfect snack for a warm summer night. Or a cold night. Or anytime you’re remotely hungry.

8:10 p.m. – I’m back, and a sweaty mess. Everyone else is settled in around our completely unnecessary campfire. I gave it my all and my all is pathetic. Three laps in just under a hour. The first lap is incredible. Every lap after that just feels like a lot of work.

6:49 p.m. – Bag pipes are overwhelming the speakers for the safety speech.

6:41 p.m. – Here is the safety speech and a reminder that this is an all volunteer event. And the first warning about the lion.

6:07 p.m. – A champagne toast for engagements, birthdays and new homes for all of the teammates. Less than a hour and we’re racing.

5:59 p.m. – The men’s team is loading up on Pabst Blue Ribbon, which seems socially acceptable now that it’s a local brew again (sort-of). The women are getting glittery temporary tattoos.

5:21 p.m. – The mystery of the ice is solved. A new vendor previously used to supply three 200 pound blocks. This year a new vendor was needed and  could only provide three 400 pound blocks. The sculptor picked them up in Chicago and drove them back without a freezer. They’re now a couple pounds lighter and in storage at Purple Door Ice Cream until tomorrow.

5:02 p.m. – Team text message chain “I have had zero beers so far. Time to fix this.” Someone is eager to end their volunteer shift it appears.

4:57 p.m. – After losing by 130 miles to PANCAKES last year, we’re debating if drug testing needs to be in place. We’re also debating the merits of the unethical running of the manifest card up the Booth Street Staircase. Teams use a runner to pass the manifest from the lower level to the upper level of the hill without having to ride or carry a bike up it.

4:35 p.m. – Our team name this year is CAKE PANS. Why? The winning team last year was team PANCAKES If you don’t stand a chance of beating them, at least attempt to get confused for them.

4:27 p.m. – The team starts to funnel in at our double-super-secret campsite just off N. Humboldt Blvd. Looks like we’ll have plenty of carbohydrates to keep us rolling. This is good because the dinner was vegetarian and gluten-free (except for a bun).

4:09 p.m. – I stop by the Riverwest Co-op for the free pre-race dinner. Suffice it to say I beat the rush. The fiancée and Laura served my dinner as part of their cushy volunteer post. I’ll be directing traffic from 3 to 5 a.m.

4:03 p.m. – My team of six has absolutely nothing resembling a plan. I would say this is a disadvantage, but our previous plans have been so poorly thought-out that our lack of planning could actually be construed as an improvement. I hear rumor that the ladies’ team has everything planned out.

4:02 p.m. – I’m told that the big blocks of ice arrived early. The ice is for the trophies. Where they’ll store the huge blocks in the mean time, I have no idea. Teammate Chris Socha has apparently been reassigned from his volunteer task to work on this.

4:00 p.m. – We’re back for another year of racing at the Riverwest 24. Our sponsorship agreements fell through with Red Bull, Mountain Dew, Home Depot, Gruber Law Offices, McDonalds and Bud Light. So instead of racing for cash, we’re doing this for fun. And because we’re idiots. 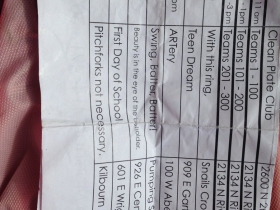 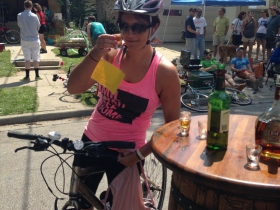 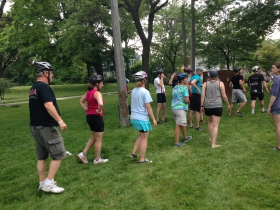 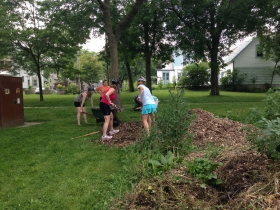 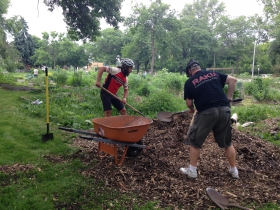 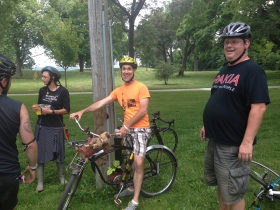