Hundreds began arriving as soon as 5:30 a.m. to sign up for the event. And as we stood in line more new developments for Milwaukee were announced.

Waiting in line. Photo by Alysia Dvorachek. Click image for an expanded view. 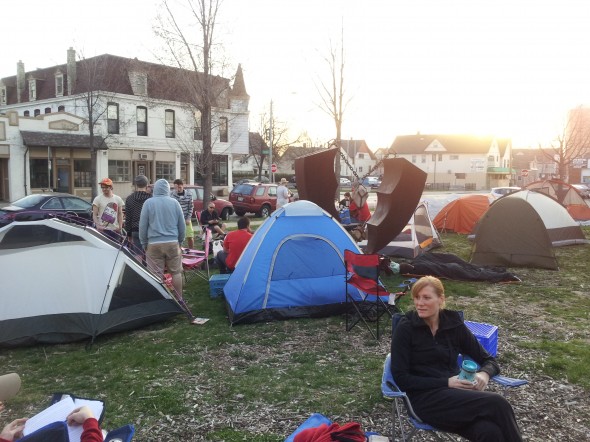 Camping out for a spot in the Riverwest 24. Photo by Sarah Young.

On May Day 2013 bicyclists filled Garden Park in Riverwest for their shot at an entry into the Riverwest 24. Despite registration not opening until 3 pm riders fueled by Facebook photos of a group of riders camping out, began arriving early in the day to secure their spot in the event.  Sarah Young, told Urban Milwaukee that she arrived at 5:30 am to hold a spot in line for her singularly-named team, Spoke’n Hot Mother Truckers of Justice.  She was already 29th in line. By 9:30 am, when I arrived the person holding the sharpie, unofficially designating them the last person in line, was sporting 130, making me the 131st team in line. By the time registration opened at 3 pm the park was full of bicyclists, at last count over 250 all hoping for one of elusive 800 slots.  In the end not all would get a slot, because many of those 250 folks in line represent teams with up to six riders each so the 800-perrson limit was met pretty  quickly.

As the fervor to get into it might suggest, the Riverwest 24, now going in its sixth year, is more than a bike race. It isn’t about who’s the next Lance Armstrong. It’s about showing off an amazing community, in the most unusual way, by bike for 24 hours straight. No, experiencing a neighborhood by bike isn’t that uncommon (though it is beautiful), but doing it for 24 hours straight is pretty unusual.  Throughout the ride residents show off their community, cook out, cheer on riders, have parties, and sometimes they even spray the sweaty riders with a hose. 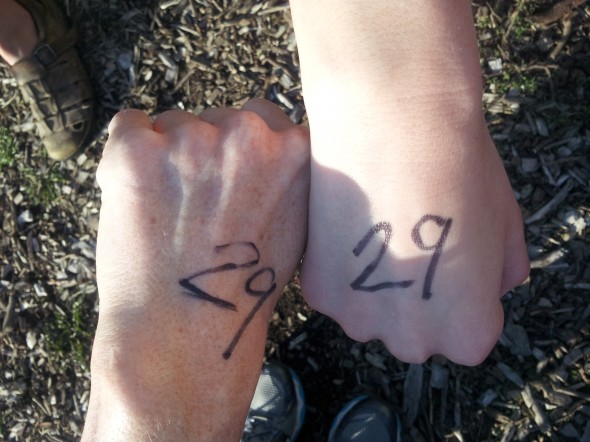 And Armstrong-like speed alone won’t win this event anyhow, as bonus points are needed to put teams over the top.  To earn bonus points riders stop at check points that last year included dancing to Michael Jackson, getting a haircut, likely a mohawk, and the infamous tattoo stop (you pretty much have to get one if you expect to win), and you never know what activity organizers will come up with next.

(A special thanks to Sarah Young and Alysia Dvorachek for providing photos of the event).

It was a very busy week in the world of development.

The biggest, literally, development news of the week was the Common Council’s approval of the TIF district for Northwestern Mutual Life Insurance’s new downtown office tower. Then while I was getting my sunburn registering for the Riverwest 24, Sean Ryan, The Business Journal, broke the news of plans to build a 39-unit mixed-use apartment building on the former Pizza Man site.   And just this morning Ryan reported that Tim Dixon is teaming up with Hovde Properties LLC (yes as in Eric Hovde) to convert a former warehouse into 90 apartments in Walker’s Point near the Iron Horse Hotel. A tip of the hat to Ryan this week.

7 thoughts on “Eyes on Milwaukee: Riverwest 24 Registration Gets Huge Turnout”