The modest home was hidden in plain sight until a Wright fan from Chicago started snooping around. 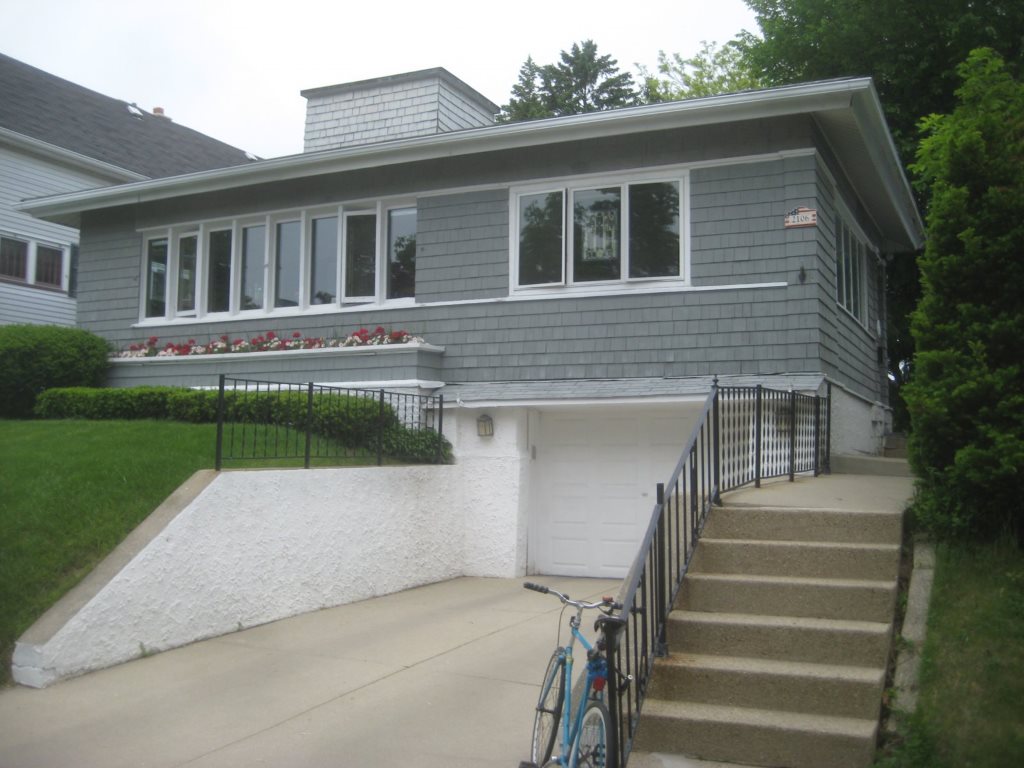 In October, 2012, I met a fellow named Richard G. Johnson at a party in Milwaukee. The Chicagoan, who was a technical assistant at Northwestern University’s Medill School of Journalism, told me his hobby was researching Frank Lloyd Wright buildings in the Midwest, and the next time he was in town he wanted to show me a few structures that he suggested were designed by the famous architect.

We have a number of Wright-like buildings in Milwaukee that were indeed designed by other architects, and I suggested the buildings he thought were Wrights had been done by somebody else.

But Johnson was way ahead of me on that score. He knew that Wright had complicated business relationships with other architects like Russell Barr Williamson, and with a number of contractors like the American System-Built Homes, for which Wright and Williamson both worked. Williamson, for example, had superintended the construction of the documented Wright home on N. Terrace Ave. known as the Bogk House.

I thought it odd that the notorious egotist Wright would have undocumented buildings in the metropolitan area, but Johnson had an answer for that: He theorized that Wright, who had been involved in a number of personal and professional scandals, had good reason to keep his name quiet, but he still had to make money. Also, the American System-Built Homes enterprise was to have been America’s first mass-produced home builder, yet only a dozen were ever built, of which six were in Milwaukee, so the firm was on shaky financial footing from the beginning.

Wright suffered international professional and personal opprobrium after he and his mistress, Mahmah Borthwick, had left their respective spouses and children to live together. He built Taliesen for Borthwick. Their relationship ended in 1914, when she was murdered in the home, causing even more notoriety for the architect, so it is understandable if he wanted to lay low at this time, Johnson told me.

We drove around and looked at a number of multifamily buildings on the East Side that Johnson said could have been by Wright, based on circumstantial things like massing, window placement and construction materials, particularly poured concrete foundations, an innovation of the early 20th century that Wright embraced. Milwaukee has a large number of such buildings; most are solid and haven’t shifted an inch in over a century. The jury is still out on those buildings, but a verdict has been reached about a home in Shorewood that Johnson and I visited.

Johnson pointed out the details of the home that suggested Wright. I had noticed the building on many earlier occasions, but had simply dismissed it as built by a contemporary. Johnson was quite convincing, although he lacked specific documentation. Had he been to the Wright archives? Yes he had, many times. Did he check the Shorewood Village records? Yes, indeed. Not much there. Did he talk to the historic preservation folks? Yes, and they had dismissed his theories.

I wished him well with his research, and thought of him every time I went past the simple, elegant structure. Johnson went on to visit the home a number of times, attempting to prove his theory. “He was like Indiana Jones,” the home’s co-owner Patricia Wisialowski told the Milwaukee Journal Sentinel. Indeed, Johnson was part of a team that discovered other unknown Wright homes in the Chicago area.

Johnson’s research here was vindicated last week. The 1917 residence at 2106 E. Newton Ave. was revealed as an authentic Wright home on June 5th. It is the first rediscovered Wright structure in the world in the past decade.

Unfortunately, Johnson was not alive to hear the news; his little heralded death occurred in September 2014.

The final key to the Wright documentation came from a highly qualified source who did take Johnson’s research seriously. He is Michael Lilek, Curator of American System-Built Homes at Frank Lloyd Wright Wisconsin.

Lilek recalled first hearing about the home from Johnson “a few years ago and brushed it off,” he says. “Only 433 Wright designs were executed and they are well-known and and carefully researched, so I thought it couldn’t be.”

But a visit to the home showed many similarities to the Wright homes on W. Burnham St. that Lilek cared for, and prompted him to further research.

He found an advertisement from 1918 stating that the house was originally built by Frank Lloyd Wright, but that was hardly conclusive. The Frautschi Home, on E. Newberry Blvd., for example, had, in the past, been advertised as a Wright home, but was by Williamson. [See House Confidential, July 27th, 2014].

Then, Lilek dug a little deeper, and found the confirmation he had sought in a lawsuit and construction lien against the builder and developer found in the files of the library of the Milwaukee County Historical Society. Wright’s name was listed in the court filings and testimony — the smoking gun Lilek needed.

Lilek found that the System-Built developer may indeed have constructed this home without Wright’s knowledge. Wright had complained of not receiving documentation and pay for much of his work. With his notoriety, it may have been difficult for him to assert his rights, or to make too much of a stink about it.

“I remember jumping and making a lot of noise in the library … when all the pieces fell into place and I knew I had discovered another Wright building. … It’s been at least a decade. This is so incredibly rare and unusual,” Lilek says.

One problem remained: why did the home not appear in The Frank Lloyd Wright Foundation Archives, at The Museum of Modern Art and Columbia University? Wright produced 900 working drawings and sketches in the archives. The answer to that question was that the drawings for “Model A203” had been misfiled, a not-uncommon archival error.

With his research complete, Lilek made his announcement on June 5th, and offered a brief tour of the compact home, which is a “Model A203,” but constructed reverse to the original plans. The interior is vintage Wright, with simple details and an economy of floor plan that characterizes his style. There are built-ins, and moldings and a generous use of light and shadow in the 1917 home, which has been largely unaltered, with the exception of a porch that was enclosed and a garage that was excavated beneath the home in 1976.

The exterior of the home is grey and white, with a flower box below the living room windows. A large column protruding above the roof is far too big for the small fireplace flue within. Originally, it was to have been vented, Lilek said, drawing air through the eaves to keep the low attic cool. There are no corridors in the two-bedroom home, and in fact, there is a clear view in all four directions from the center of the living room.

The floorplan would work perfectly well today, and apparently has suited the current residents well.

“Is the home patented,” I asked Lilek? “It says “Patent Pending” on the drawings, but the patent was never filed,” Lilek responds.

“So, could somebody build this thing today if they wanted?”

“No,” Lilek says. “The Frank Lloyd Wright Foundation owns the copyright to the building.”

You’ll just have to wait for it to come on the market. And expect to pay a newfound premium of 40 percent or more when it does.

Fun Fact: The Village of Shorewood estimates the fair market value of the home at $225,100, or $10,800 less than its assessment. The home will almost certainly command a premium to the assessed or market value due to the Wright connection, however the assessor cannot use celebrity as a factor in making his determination. If the home eventually sells in an arm’s length transaction for a premium, then that value can be incorporated into his new calculations. But the discovery should not affect the valuation until such time. 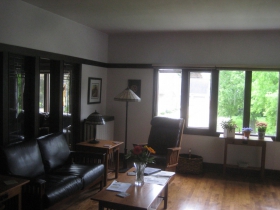 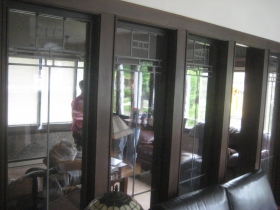 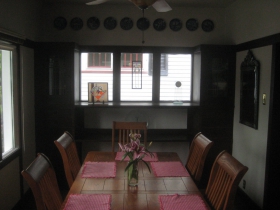 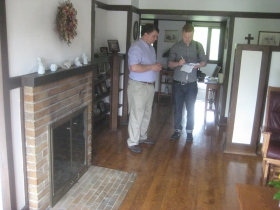 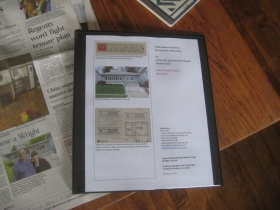 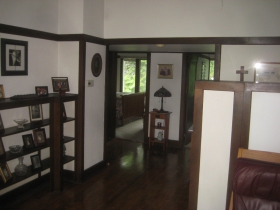 How Milwaukee Is It? The residence is about 4.3 miles from Milwaukee City Hall on bicycle via the Oak Leaf Trail.