The annual East Side garden tour allowed visitors to see the backyard of a not-in-my-backyard activist. 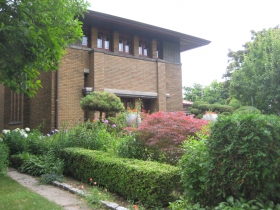 Often confused for a Frank Lloyd Wright work, the 1922 home is by his protegee Russell Barr Williamson, who served as the construction superintendent of Wright’s 1916 Bogk home, 2420 N. Terrace Ave. Photo by Michael Horne.

For nearly a half century this 1922 home on E. Newberry Boulevard has been the home of Pamela Frautschi, who has had careers as a dance instructor, tour leader and community organizer. In arts circles she is probably best known for having founded the studio called Dance Spectrum with Katherine Kersten.

She is the president and a founder of the Eastside Milwaukee Community Council [EMC2], a coalition of neighborhood groups that claims credit for having “forced [UW-Milwaukee] to admit that many of the problems with off campus behavior were caused by their uncontrollable growth and refusal to discipline the minority of students that caused trouble for the long term residents.”

Frautschi has also spoken out in opposition to some development plans on the East Side, including the zoning for the new library [Urban Milwaukee: “East Side Library Zoning Approved”] and is a copious taker of notes at public hearings and meetings.

The EMC2 also organizes an annual garden tour each year, and this Sunday, July 27th, Frautschi’s lovely gardens were among those on display for free. That gave visitors a chance to see what is in the backyard of a “not-in-my-backyard” activist.

Plenty of perennials, that’s for sure. When you have a 5-decade commitment to your yard, you might as well do something more ambitious than plant geraniums and petunias each and every year (although Frautschi likes the color of the former and the scent of the latter.) Frautschi has relied on the versatility and durability of perennials, and it shows in the lush, abundant and well-tended growth on the highly visible 59’ x 150’ corner lot. Some plants have good years, others not-so-good. If a plant is growing poorly in a given location (or growing too well) Frautschi has no problems yanking it out and finding a new home for it.

Some recovering irises in a patch between the sidewalk and curb show signs of having been in their new home for just days. Weeds are nil, and the privacy hedges are tautly trimmed. A Japanese maple is in perfect form, no easy task in this climate.

The maintenance of the yard is a time-consuming task, and Frautschi appears to be the principal gardener. In 2008 a reporter came to the home to do a story about it and was perplexed when there was no answer to her knock at the door at the appointed time.

That’s because Frautschi was out in the yard, weeding, dwarfed by her plants.

All of this garden may tend to distract one’s attention from an ordinary home, but the Frautschi residence rises to the challenge with its crisp Prairie-school styling and evident airiness.

The “2 story residence old style,” as the city calls it, has 3,092 square feet of finished living area, with 1,740 square feet on the first floor, and 1,352 square feet above. It has 3 bedrooms, and 1 and a half baths. There are a total of 7 rooms, including a rec room that may still have the original pool table intact. The assessor noted original furnishings and built-in drawers in the bedrooms. The whole rests on a 16 inch poured concrete foundation, an innovation at the time, and one that has proved durable — there is not a crack on the entire facade of the building. Inside are two fireplaces, appropriate for a Prairie-style home, and California Redwood woodwork hailing from the home state of Dr. Bours.

The reception hall is walled with brick, and there is brick trim in the dining room. This interior-exterior use of materials is another Prairie School trick to bring the outdoors in, and vice versa.

The kitchen was modernized in 1969, and possibly since. In 1994 the bathroom was remodeled. The shower stall was removed and a new bath was installed. The assessor feared the remodeling was not entirely in keeping with the original, and knocked a couple hundred bucks off his estimate. The home is radiantly heated with hot water, and is also air conditioned. The 8,850 square foot lot is valued at $103,300, or $11.63 per square foot, while the improvements are valued at $306,800, for a total assessed valuation of $410,100, down from a high of $554,000 in 2006, before the world ended. Taxes of $12,341.37 are paid in full. If Ms. Frautschi and her revocable trust ever decide to sell, the home could, in a good market, command a premium due to its architecture. If there is any justice in the real estate world, a premium would also be paid for the landscape, which enhances both the neighborhood and the residence.

That year, Mrs. Charles C. Wilson of Sparta wrote to Dr. Bours in Milwaukee, who had advertised “Women’s Diseases a Specialty” in the newspaper.

“I am worried to death about the recent discovery of the condition of my only daughter,” she wrote the doctor at his offices in the Merrill building downtown.

“The dear girl has had the misfortune to repose to implicated confidence of a man who took advantage of her innocence and tried to ruin her, and now that she is in a family way, the hound has deserted her. We are willing to make any sacrifice to preserve her good name and reputation. Will you take the girl and relieve her disgrace so she can once more face the world?”

Nine days later, the doctor replied through the mails that he could help resolve Mrs. Wilson’s concerns for a fee of between $50 and $100, suggesting the entire course of treatment and recovery would take three days.

That November, Bours, four others in Milwaukee, and hundreds of other doctors and midwives were arrested in a nationwide raid described at the time as “the most extensive and far reaching ever made by any department of the government,” conducted under the personal supervision of Postmaster General Frank Harris Hitchcock, who served for the entire administration of President William Howard Taft.

Bours was sentenced to 2 years in federal prison at Leavenworth, Kansas, but his sentence was stayed pending appeal, which he won two years later. Bours was later involved in a civil lawsuit regarding a 1914 abortion in which the patient died. Bours died in 1931 at 70 at his summer home in Okauchee lake. His past was not mentioned in his obituary.

How Milwaukee Is It? The residence is about 3 miles from Milwaukee City Hall 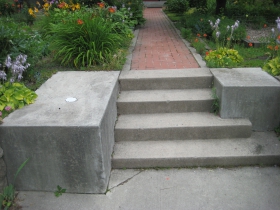 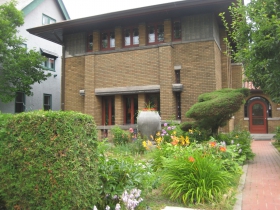 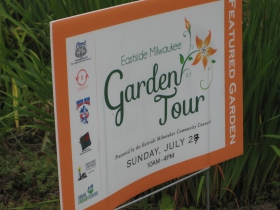 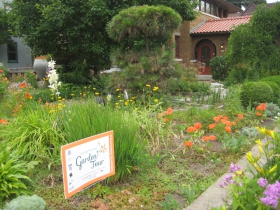 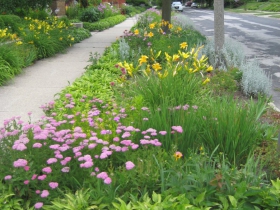