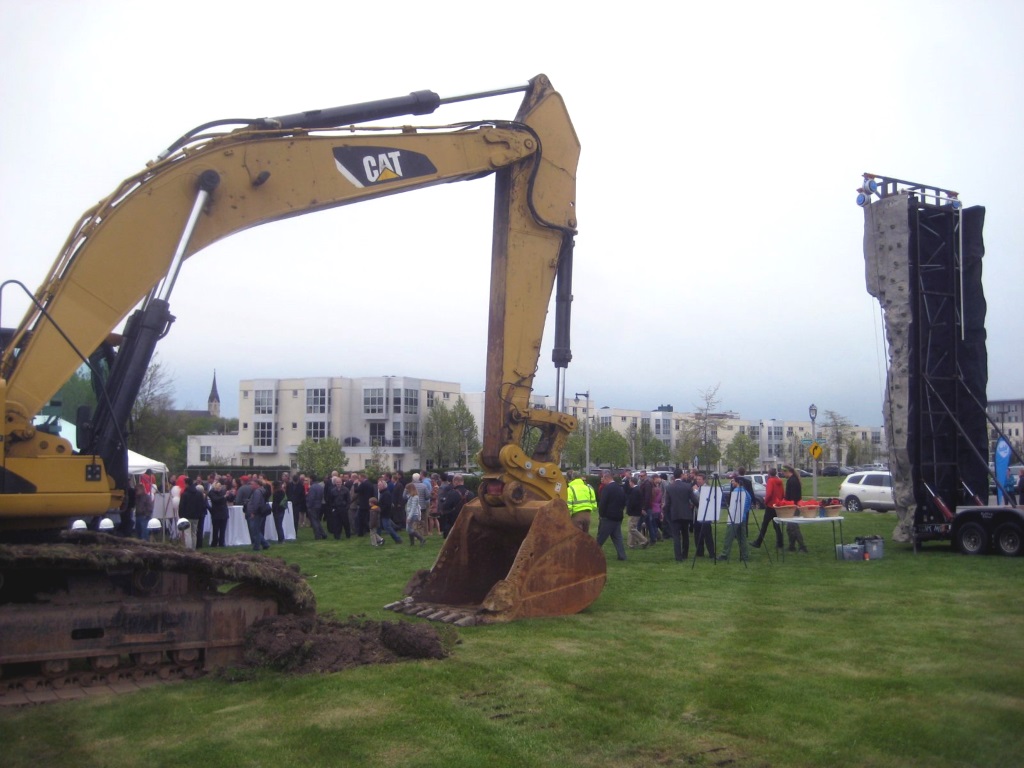 A groundbreaking day for Mandel Group. Photo by Michael Horne.

In late 2013, Mandel Group Chief Operating Officer Bob Monnat got a call from real estate broker John Kuhn informing him that Kuhn had a client looking for 18,000 square feet of commercial space and that Mandel’s undeveloped property on the Milwaukee River at the southwest end of the North Avenue Bridge fit the bill. The client had a few stipulations regarding its build space, Monnat was told. A forty-five foot ceiling height would be one of them. And thus began what Monnat acknowledged as “the coolest project we have ever put together” in his two decades with the development firm.

But when he brought the unusual idea up to Chief Executive Officer Barry Mandel at a development meeting, Monnat recollected, “I never saw Barry speechless as long as when he was first told of the deal.”

Monnat made his remarks at a groundbreaking facility for Adventure Rock, the client with the demand for lofty ceiling clearances. It currently operates an indoor climbing gymnasium in Brookfield that has been wildly successful. Research showed that a significant percentage of members lived on the East Side, and the firm wanted a location near where all the cool kids lived. “We need to move into the city, where so many of our members are,” Monnat remembered the clients saying. The result will be Milwaukee’s first indoor climbing gymnasium, and Monnat expects it to be a landmark and an area-wide attraction. “Usually these are located in a dark warehouse in the back of an industrial park. Here, we will have windows, a view of the city.”

With the inclusion of 46 apartments in the mixed-use development, called Rivercrest Phase II, Mandel and its financial backers were able to put together the deal consummated today, silver shovels and all. The building is designed by Johnsen Schmaling Architects.

Mayor Tom Barrett made some remarks about the new development, and seemed excited to welcome a business that “has a lots of ups and downs,” as he put it. Barrett put the location in its geographic perspective. This is a key property, he said.

The location is immediately east of the Pick ‘n’ Save located on the southeast corner of E. North Ave. and N. Humboldt Ave., and is at the foot of the North Avenue Bridge. It is also the northern terminus of N. Commerce St., extended with the redevelopment of the Beerline B neighborhood during the late 1990’s. The site had lain vacant for decades; it had long been a railroad switching yard and an altogether dismal place.

But UWM “had the foresight to cross the river” when it built a dormitory across E. North Ave. some years ago. “As we fill this property in, we are on a straight shot downtown,” with the riverwalk and numerous other connections and reconnections, like the Holton Marsupial Bridge. No more vacant lots, no more post-industrial scenery. All new, and redeveloped — much during the Barrett administration, which began in 2004.

“People believe in this city, and we are witnessing it in real time in Milwaukee, ” Barrett said.

The mayor contended the renaissance comes from the two groups that are driving the population boom here.

“The young who climb the walls,” he said.

“And the young at heart who think they can.”

A giant excavator was on site, and had scraped up a ceremonial pile of dirt for the dignitaries to move around for the cameras, but Monnat elected to not make a show of the giant machine’s prowess, so it sat as an idle backdrop to the ceremonies. Bad experience in the past, you know.

This is the first of five groundbreakings planned by the Mandel Group in the City of Milwaukee this year, with construction budgets totaling $200 million, said Barry Mandel. 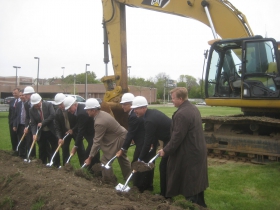 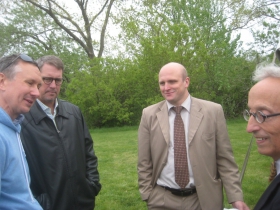 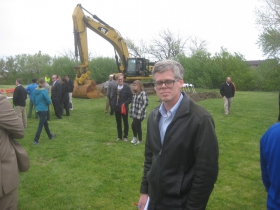 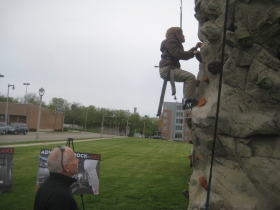 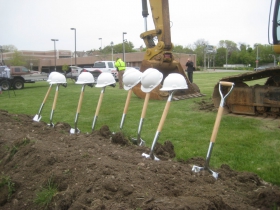 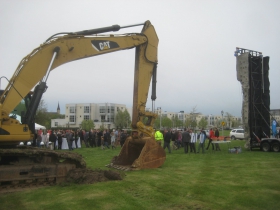 6 thoughts on “Plenty of Horne: Mandel Group’s “Coolest Project” Ever”