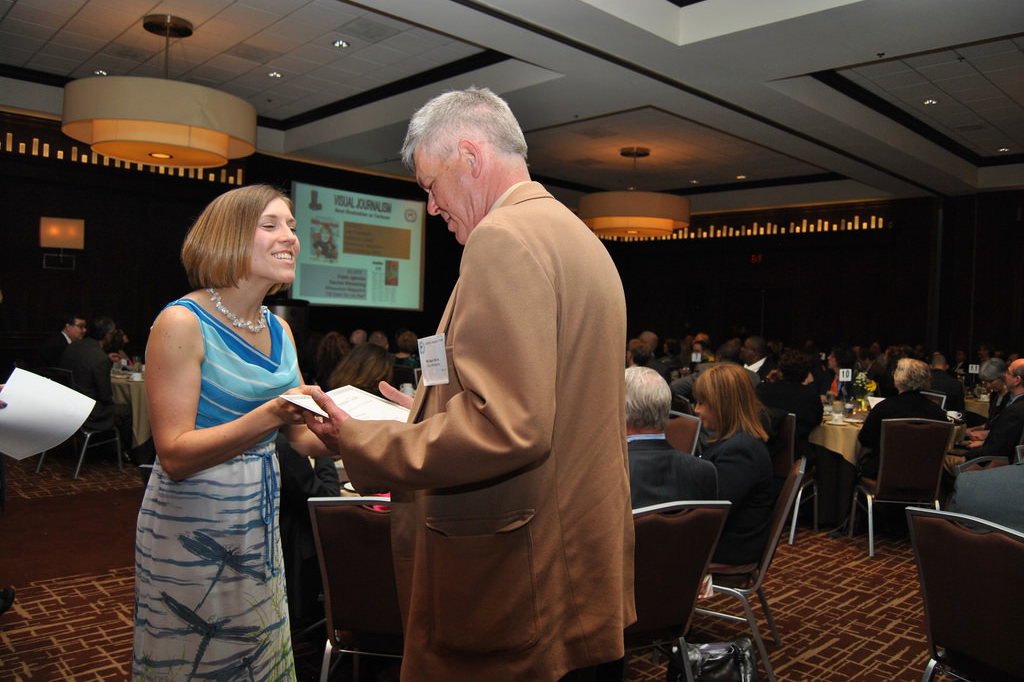 Urban Milwaukee won three awards in the state-wide journalism awards for 2014 presented by the Milwaukee Press Club on Friday.

Versatile writer Michael Horne won the silver award for Best Blog for his popular column, House Confidential. Horne has by now written more than 100 House Confidential stories, covering a wide range of people, from politicians to CEOs, journalists, notorious criminals and Brewers’ mascot, Hank the Dog. His most recent column told us all about the Whitefish Bay colonial of new Brewers’ manager Craig Counsell.

Urban Milwaukee also nearly swept the awards category for Best Critical Review. Our theater critic Dominique Paul Noth won the gold award and classical music critic William Barnewitz won the silver award. Noth has won Press Club awards before, back when he did theater and film criticism for the old Milwaukee Journal. Barnewitz is a relative newcomer to writing but not to classical music. He was principal horn player with the Milwaukee Symphony Orchestra for 15 years and also performed with the orchestras of Los Angeles Philharmonic, St. Louis, Atlanta, Utah and Sacramento and played on more than 200 film soundtracks.

Barnewitz won for this story while Noth and Horne won for several stories. Noth’s latest review can be found here.

“We’re very proud of the work of all three writers,” Urban Milwaukee editor Bruce Murphy said. “Michael Horne is way overdue for an award like this, and the work of Dom Noth and Bill Barnewitz, I think, shows the strides we’ve made in a very short period of time to add strong arts and entertainment coverage to the news and politics coverage for which Urban Milwaukee has been better known.”

Murphy also won a Press Club plaudit, earning the silver award for Best Single Editorial, for a column he did for the Madison weekly Isthmus. Murphy won awards for his work with Urban Milwaukee in both 2013 and 2012 and has won a total of 13 Press Club awards in just the last decade.

Founded in 1885, the Milwaukee Press Club is the oldest, continuously operating press club in North America. The well-attended ceremony Friday honored former ABC News White House Correspondent and Hall of Fame journalist Ann Compton as the Club’s 2015 Sacred Cat Award honoree. The award, which has been given annually since 1973, recognizes excellence in journalism at the national level.