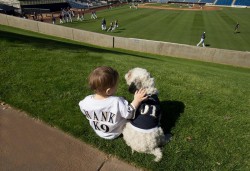 Hank with a fan in a custom Hank jersey. Photo from Milwaukee Brewers.

Even before the regular season began, the Milwaukee Brewers hit a public relations home run when the baseball team adopted Hank, a stray dog that wandered onto its spring training field at Maryvale Baseball Park in Phoenix. It is the biggest feel-good animal story to hit this town since Gertie the Duck hatched her chicks on the Wisconsin Avenue bridge in 1945.

A large crowd including the mayor and county executive greeted the dog at his arrival in Milwaukee on Sunday, March 16th. Hank is “Milwaukee’s favorite new pastime,” wrote Jim Stingl of the Milwaukee Journal Sentinel, after hundreds of people lined up at 5:30 a.m. one morning to get a glimpse of the hound at his Miller Park debut.

“I think he’s bored to death at our house. He’s used to 5 jillion people,” Marti Wronski, the Brewers vice president, corporate counsel and Hank’s housemate told Stingl. The Wronski residence was already occupied by Marti, her husband Andy Wronski, four pre-teen sons and a dog named Bella before Hank moved in, so it’s probably not quite as somnolent as she suggests. The Wronski family is merely the custodian of the dog, she said. “We’re giving Hank a home. It is very clear this dog is the fans’ dog.”

So, what kind of dog house is the Wronski residence? Nothing to poop on, it turns out. The 1946 colonial is located in the northwest corner of the Village of Whitefish Bay. It has nine rooms, including four bedrooms, three full baths and one half-bath in its 2,972 square feet. The home, which is air-conditioned and heated by hot water, sits on an attractive 10,018 square foot lot, which is a rather large one for the inner-ring suburb. Window boxes and planters on the front of the house were decorated for the season back in December, it appears, and a tennis ball sits on the front lawn awaiting a game of fetch. A willow tree looms precariously in the back yard, longing to be put out of its misery, and likely rotting from within, as willows are prone to do. A magnificent stand of oaks that well predates the neighborhood can be seen from the home, as can the freshly painted Whitefish Bay water tower. The residence has some brick detailing, attractive shutters and those window boxes.

On February 22nd, 2012 the Wronskis paid $15,000 for new vinyl siding. The family also shelled out $4,000 for a tear-off and re-shingle roof job. A six-foot fence enclosing Hank’s paddock was replaced in 2010. The Wronskis also signed a $19,247 contract for gutters, soffit, etc. “contingent on financing.” That little clause must have been for humor’s sake, since both of the adult Wronskis are attorneys, with Andy heading up the litigation department at Foley & Lardner as well as working on its Sports Industry Team. Nineteen grand is small potatoes for partners at that firm.

The home was built by Frank Kirkpatrick Inc. and was designed by Edward R. Novak in 1945 for its original owner, William J. Sloane. Kirkpatrick had been the city’s War Housing Center director during the great conflict, and subsequently led the fight against public housing in Milwaukee. Recipients of the Frank Kirkpatrick Award, granted annually by the Greater Milwaukee Foundation, include former House Confidential honoree Julia H. Taylor.

Sloane, the original owner, didn’t stay long in the home. By 1956 it was owned by Kenneth Frank, and  six years later it came into the possession of Dr. R. Krill. Doc Krill kept his contractors busy in 1964 removing closets, dividing a single large bedroom into two 13 ft x 15 ft. bedrooms, turning the sewing room into a walk-in closet (who among us would regret doing that?) adding a “large storage closer” and closing up the fireplace in the second floor bedroom for some reason. By 1978 the home was owned by William B. French, who sold it in the 1980’s to Haskell “Hack” Noyes III, who did even more remodeling to the place.

Hank wandered onto the Maryvale ballpark in February and immediately captured the attention and hearts of players and fans alike. He was named after Henry “Hank” Aaron, and has displaced the great baseball player from first place in one-word “Hank” Google searches. The curly-coated dog fit right in with the team, and has even run with the sausages. There is talk of a Hank bobblehead doll joining the lineup this season. Hank clothing and accessories may be among the best-selling items for the Brewers, and perhaps Major League Baseball this season. Twenty percent of the proceeds from Hank gear will go to support the work of theWisconsin Humane Society. Hank is one lucky dog with a mission to help others.

About Andy and Marti Wronski

Andrew J. Wronski [U Minnesota Law 1994] is a member of the Wisconsin Bar Association and was selected as one of the Business Journal’s “40 under 40” in 2009. He has been involved with the United Way, the Hunger Task Force and started Foley’s “K’s for a Cause” fundraising program. He also has partnered with Brewers Community Foundation, run by former House Confidential honoree Cecelia Gore. He stays busy at Foley, and counts among his clients the Wisconsin Women’s Business Initiative Corporation, and has even handled a couple of lawsuits for the Milwaukee Brewers, wouldn’t you know, including a successful (yet uncollected) judgment of  $74,447.51 against “Pure Spirits Worldwide Yes Vodka.”

Marti Wronski [U Wisconsin Law 1997] is the vice president and General Counsel of the Milwaukee Brewers, and was selected as the 2012 “Top Corporate Counsel” by the Business Journal. Like her husband, she worked in the Litigation Department of Foley & Lardner, but left the firm in 2002 to teach at Marquette University and to become the General Counsel of the Milwaukee Brewers, where she is the highest level female on the staff. Her responsibilities including negotiating multimillion dollar player contracts and approving costumes for running sausages. She continues at Marquette, and has indicated that she might like to return to teaching full-time at some point in the future. She has been involved with the Betty Brin Children’s Museum, the Make-a-Wish Foundation and the Hunger Task Force. She, her husband and other couples created the Miracle League, a YMCA-sponsored field at 9050 N. Swan Road where children of all abilities can play baseball, and maybe toss a few to Hank.

How Milwaukee Is It? The residence is about 6 miles from City Hall, and about 10 miles from Miller Park. 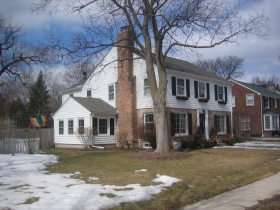 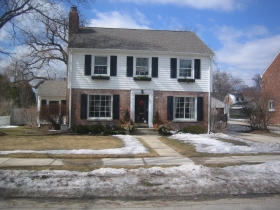 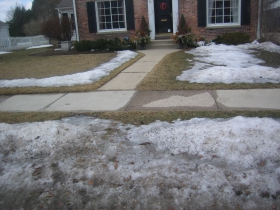