Hooligan’s, Your Place for Canned Beer

Seriously, the selection is huge and the benefits of beer in cans are many, the bar menu proudly notes.

With the possible demise of At Random, the Milwaukee market for cold, creamy cocktails could be missing one of its major producers. Thankfully, East Side stalwart Hooligan’s Super Bar (2017 E. North Av.e) offers a number of boozy shakes. The first time I stepped into Hooligan’s it was to meet a friend to watch the NHL playoffs last season, as ice hockey pairs well with their frosty drinks. I stopped in recently to watch my Canadiens face-off against Tampa Bay in Game 1 of the second round and a team of budget beverages helped me forget about the Habs overtime loss.

Happy hour at Hooligan’s (M-F, 4pm-7pm) has a little something for everyone, though it doesn’t include the aforementioned spiked shakes. All of their 30 or so taps, plus 99 bottles and cans of beer (and a couple ciders) are $1 off, wine is also $1 off, and mixers are $2 off. The taps run the gamut from Coors Light to Franziskaner ($3-$5.50 regular priced), with a couple odd balls thrown in. I started my night off with a pint of Upland Brewing Company’s Campside Session IPA, a crisp, mellow IPA, perfect for warm nights around the fire or on Hooligan’s front patio, which sits at the cusp of North, Farewell and Ivanhoe, a bustling corner come summertime. Hooligan’s, of course, has a long history reaching back to 1936, as we’ve written, and the old Super Bar expanded and added food service over the years.

Less than a block away, the aluminum epicenter that once was Cans bar has closed, but Hooligan’s is keeping the love of crushable containers alive on the East Side. Their menu includes a blurb about the benefits of cans; apparently they lock in the flavor better than bottles, they take up less cooler space (more variety), more craft and imports are available in cans now, and they are more environmentally friendly (easier to recycle).  Hooligan’s is one of the few quality places where you can get less-than-quality beers for $1-$2, the kind of cheap stuff we drank by the barrel back in college. I’m talking about Natty Ice and Busch Light. Take a step up to High Life and the other standard domestics for just $3 and $2 on Mondays.

Hooligan’s is known for their extensive pub grub menu, which includes half-off appetizers during happy hour. I sampled their cheese curds because of the smoked paprika aioli, but they ended up being too salty to taste the sauce, which was good. The aioli would be great on a burger, which is one of their many options from their build-your-own menu. This includes Sciortino Sesame Rolls, Miller Pretzel Buns, buffalo meat, sauteed crimini mushrooms, pesto mayo, among a bunch of other yummy choices. Had I known they offer free popcorn and kettle chips during happy hour I would’ve just munched on those. Before leaving I did sample their blue cheese coleslaw and it is delicious.

The second drink I had at Hooligan’s was a $5 (happy hour price) bloody mary with a sizeable chaser of Sprecher Stout. It was a solid tomato twister without all the superfluous fixings. On Sundays they are $5.50 from 11am-2pm. Other daily specials include Long Islands and Sweet Tea & Lemonades for $4 on Tuesdays; rail mixers for $3.25 and wings for half-off all day on Wednesday; $12 two liter boots of Miller Lite, High Life and Bud Light on Thursdays. The weekends feature $3 Smirnoff bombs with Monster and $4 Smirnoff cocktails. Hooligan’s menu listed Spotted Cow as a farmhouse ale, but I’ve seen it listed elsewhere as a cream ale. Which is it? You can offer your view in comments and I promise to get to the bottom of this mystery in a future column. That issue aside, Hooligan’s is fun and varied place for Happy Hour drinking, as its many regulars obviously know. 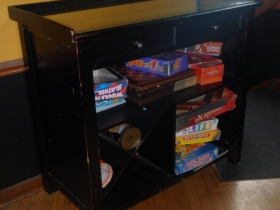 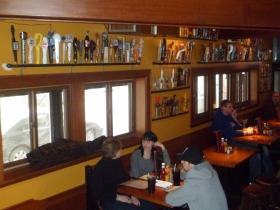 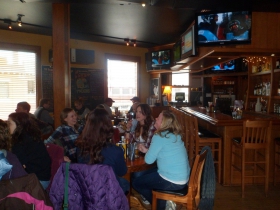