Talk about car-centric. And what a huge parking lot. Yes, it can be improved. 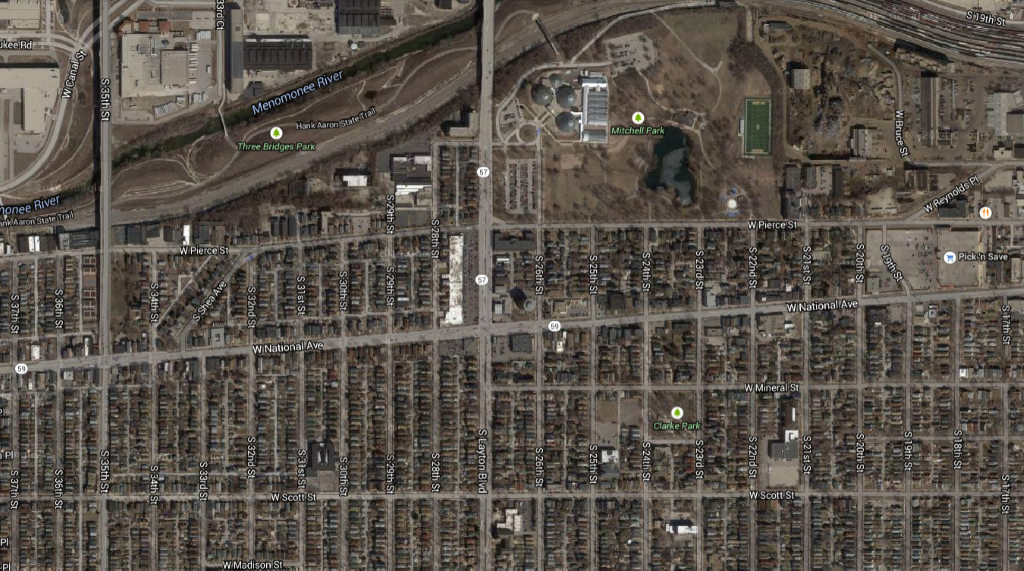 The intersection of S. Layton Boulevard (aka 27th St.) and W. National Avenue is a significant meeting point between two major roadways and several major bus lines on the near South Side. At the same time, this intersection also attempts to fulfill some neighborhood needs with a drugstore, gas station, a bank and more–all within walking distance of a residential area. The trouble is, the intersection is having a hard time doing all this at once, mostly due to its deplorable, car-centric design. There may be incremental changes that could move the intersection in a better direction, but it really  needs a more dramatic overhaul to reach its true potential.

Layton and National is dominated by an old strip mall spanning an entire block on the northwestern corner. The mall is clunky and gray, with faded green awnings covering every shop, making them look identically awful and strangely suburban for this decidedly urban neighborhood. Populating that strip mall are the usual suspects: a check cashing joint, a Subway, a Payless shoes, and so on. Unfortunately, the prime corner store, directly in view of the intersection is vacant, and by the looks of the Google Maps photos going back in time, it has been empty on and off for several years. (It was originally a Walgreens, which moved across the street years ago.) Like all strip malls, this one has a large parking lot out front, which means all the stores are set back a substantial distance from the street, requiring large signage in order to try to capture business from passersby. It’s clearly built for cars.

The other three corners of the intersection each feature a large, similarly blocky chain store: a Mobil gas station, a BMO Harris bank and the Walgreens (with a small beauty supply store just in front of it). The bank is the only business on any of the four corners that isn’t fronted by a parking lot. Put all of this together and you have a corner that is largely devoid of personality or local businesses, and mostly focused on car-centric amenities. The streets around it echo this message. Layton Blvd and National Ave are both busy four-lane roads divided down the middle by thin, concrete boulevards topped with low metal barriers. These barriers seem intended to discourage pedestrians from crossing anywhere but at the lights. Meanwhile, five different bus lines, including the Blue express line, pass through here on a frequent basis.

It’s a busy place, suffering from a poor, car-centric design. This intersection is just a few blocks south of the Mitchell Park Domes so traffic in the area is consistent, in addition to the pass-through traffic coming down National Ave. And given the many bus lines that stop at this corner, it also experiences a lot of transit-based pedestrian traffic.

Still, Layton and National does have some things going for it. First, it’s in a fairly stable neighborhood. Many of the businesses in the mall have been there for years, and the houses nearby are historic and mostly well-preserved. 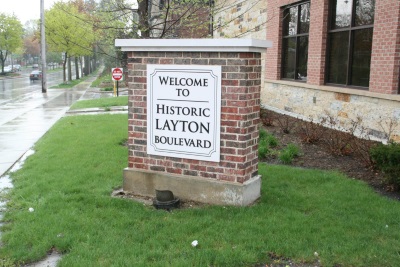 Some small attempts have been made to make the area more attractive, including a few historic lampposts, a “Welcome to Historic Layton Boulevard” sign (in front of the Walgreens) and widened sidewalks. Other attempts are even more superficial and less successful. For instance, several garbage bins on wheels have been placed near the corner bus stops, in an attempt to prevent trash from accumulating on the sidewalks. Yet the bins themselves look trashy due to their temporary nature. A handful of bike racks are also dispersed around the intersection, but unfortunately, most are rusting and appear unreliable and unused.

Another failed attempt comes from Walgreens, which placed a small beauty supply store on the corner of its lot in an attempt at better urban form (perhaps mandated by the government). But the beauty store has the same bland façade as the Walgreens and –disconnected from other businesses — does little to change the suburban feeling of the intersection. Finally, I spotted a white bench on the northwestern corner of the intersection near a bus stop, that looked as though it had been placed there by caring neighbors or perhaps the strip mall owner. However, this too was dusty and dirty, and I didn’t see anyone using it.

A few positive features appear to have been created by the businesses in the area. Walgreens placed some benches on its property, against the sidewalk, as did the BMO Harris. The latter also has a small area of greenery on its eastern side. That’s about it. 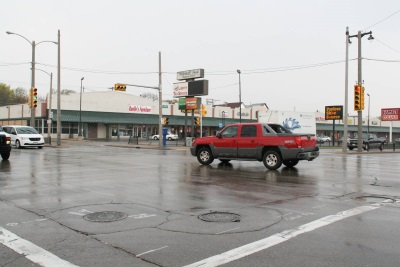 The intersection. Photo by Jeramey Jannene.

Unfortunately, the aforementioned attempts to improve the area in many cases made it worse, as noted. Nor ard incremental  improvements likely to have much impact, given the intersection’s car-centric design that does little to invite or accommodate pedestrians. This might not be such a problem if this intersection was in a rural area that no one could get to on foot. But in reality, Layton and National sees pedestrians pass through by the hundreds every day, between the people getting on and off buses and those walking to and from the neighborhood.

There’s a word for this type of street, coined by Chuck Marohn of Strong Towns. That word is “stroad,” meaning a street-road hybrid wherein cars are encouraged to move at high speeds based on wide/multiple lanes as if on a county road, yet are also operating in a higher density, urban street-like area. Marohn calls them the “futon of transportation alternatives” because they fail at being good roads or good streets. At Layton Blvd and National Ave, this is evidenced by the prioritization of car speed and amenities (parking lots and gas stations) over pedestrian freedom or interests. As a result, the intersection is unsafe, and considerable space remains underutilized, with a low tax base, and only marginally successful businesses, while cars whiz by. Between the trash, the dangerously speeding cars and the massive parking lots, why would any pedestrians ever want to hang around here?

How Can We Improve it? 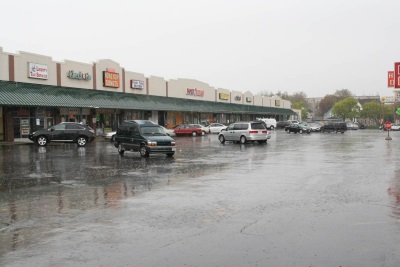 In an interview, architecture critic Tom Bamberger offered an interesting comparison between this strip mall and the one on Brady Street and Cambridge Avenue (near Farwell). The latter works surprisingly well for being a strip mall in an urban area. Its parking lot is small and the mall curves around that lot to create a more inviting space. Indeed, on a typical Friday night or Sunday afternoon, the Brady Street mini-mall is alive with activity, from college kids getting chicken wings to seniors picking up prescriptions–and many of those customers are on foot. Conversely, the mall on Layton Blvd, is far too big for its space, covering an entire city block, two football fields. Its parking lot is also much too wide and set back too far from the sidewalk. It is car-scale, not human scale. A pedestrian would feel positively unsafe walking across the mall’s parking lot. Unfortunately, it would take a dramatic renovation (and probably demolition) of the mall to get it anywhere close to the strip mall on Brady and Cambridge. Perhaps a better effort would be proposing something altogether new for the intersection. Bamberger suggested it might be a great opportunity for a developer. It’s certainly prime real estate in a fairly thriving neighborhood, and it’s largely wasted right now. A mixed use development like an apartment building with stores beneath would serve the neighborhood much better.

Some smaller-scale ideas for improvement might involve decreasing the wasted space in the mall parking lot by inviting food trucks, farmers markets, parklets or smaller buildings to fill parts of that area. Street parking along National Ave would also slow the traffic somewhat. I would also propose removing the fences that separate lanes on these streets and replacing them with flowers or trees. The fences send one message: stay out. They take away from the neighborhood by further discouraging pedestrians from spending time there, whereas greenery would add a little beauty to the space, if nothing else.

Overall, this intersection largely fails as a neighborhood space and instead, prioritizes car speed above all else. Layton and National needs a design shift to make it safer and more inviting for pedestrians, which would in turn increase its economic productivity, and might even encourage those drivers passing through to stick around. 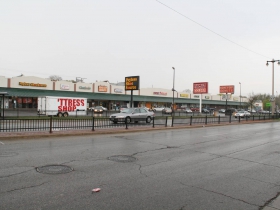 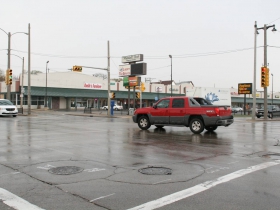 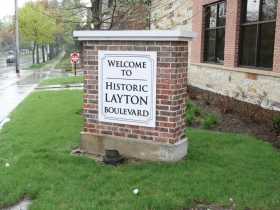 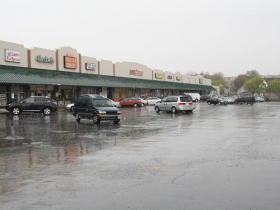 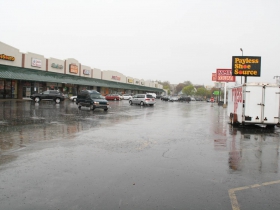 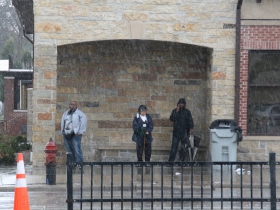