Classic west side bar has a diverse clientele and morning and afternoon happy hours.

There was a time not long ago when the majority of Milwaukee bars would open at 6AM and serve drinks to third shift workers who had just clocked out. Most of them were blue-collar factory hands, the same ones that basically built our city. My father and his friends toiled among their ranks, but as many factories closed (or shrank) in the last few decades, bars found their morning business drying up. Today a minority of bars open early. Among the few that still serve third shift workers is McBob’s Pub & Grill, a family-owned, west side staple on 49th and North.

Even though I grew up just five minutes from McBob’s it wasn’t one of the bars my parents frequented. I discovered it a few years back when searching the Internet for “best Milwaukee fish fry.” Sure enough, their selection of breaded seafood is delicious. You can also find McBob’s on multiple lists for the best local deli sandwiches, specifically their corned beef, which is the best in town for my money. McBob’s corned beef has become a St. Patty’s Day tradition for my family.

The bar at McBob’s Pub & Grill. Photo by Joey Grihalva.

With last week being Milwaukee Public Schools spring break I had off from my day job and was able to sample McBob’s third shift happy hour (8am-11am), which is the same deal as their regular happy hour (3pm-6pm). All taps are buy one, get one. This is a damn fine discount considering the imports they have an draft, including Guinness. I went in last Friday and nobody seemed to have just finished a shift, but bartender Zach (nephew of the owner) informed me that they do get some nurses, cops and Quad Graphics employees. At the end of the bar, across from the sandwich station, there were a pair of old ladies seemingly tailgating for the Brewers game, which was a mere ten hours away. (One of them was wearing those plastic Brewers sun glasses adorned with beer mugs.)

I haven’t had beers before noon since my last visit to Lambeau, but I can pretend a Spotted Cow is milk and a Weekend at Louie’s is blueberry tea. (Actually, the latter’s ingredients do include some of Rishi’s Organic blueberry tea.) If I was hungry I might’ve paired my pints with one of their many breakfast items (served until 10:45am), but let’s be honest, I would’ve picked something with that juicy corned beef. (I ended up ordering a sandwich before taking off.) Each weekend features a different breakfast special and on Wednesdays and Fridays there’s a fish special (last week’s was a grilled marlin steak).

McBob’s carries the standard domestics plus about 30 craft beers in bottle and can (with a few on tap), nine wines, and plenty of liquor. Their specialty drink menu includes two types of Bloody’s (one with house-infused Absolut, the other with their “house wine” aka Tullamore Dew) and a Cherry Tully Old Fashioned (made with their own cherry-infused Tullamore Dew). The daily specials can be found in the pictures below, which feature $2 mimosas on Sundays until 2pm and $2.50 mystery beers on Mondays. Tap beers range from $3 to $6, and they bring the happy hour deal back on Saturdays from 10pm to close. (Saturday also has $6 domestic pitchers.) The happy hour has a fourth slot on Brewers game days between the 7th inning and an hour after the game with a ticket stub and that slot also features cheap Miller Lite cans.

Besides the signature food options and numerous happy hours at McBob’s, what really sets this pub apart is their location and clientele. Situated between Sherman Park and Washington Heights, McBob’s is one of the most diverse bars in the city. On any given day you will find a unique cross-section of a city that is notoriously segregated. While the walls might be decorated with relics of the Emerald Isle, McBob’s patrons come from all walks of life, making it a great place to eat and drink any time of day. 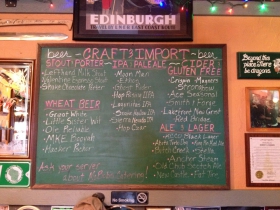 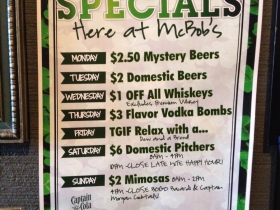 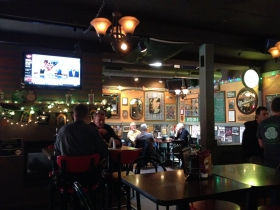 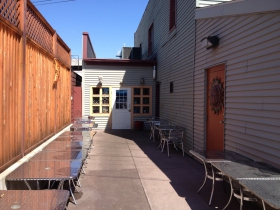 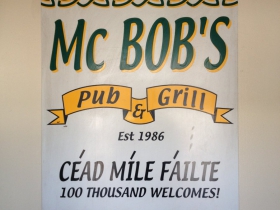 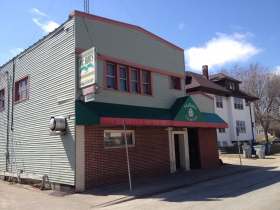