UWM Tries To Do a Calatrava

Its new research building is a compendium of architectural elements. How do they add up?

The expectations for the building were high.

“It’s a gateway building,” says Geoffery Hurtado UW-Milwaukee’s Associate Vice Chancellor for Facilities. The goal was a building “that elevated the bar on campus, a signature research building that would attract potential students and faulty,” according to Kurt Young-Binter, a Facilities Architect at UWM who worked on the project.

It’s the first new building on the UWM campus in 10 years. The first that leaves an impression in more than 50 years. It’s intended to “present a different face to Milwaukee,” Hurtado says. Designed by David Black of Flad Architects, the building will be the frontispiece for future of UWM, which includes plans for several more buildings, including a new Student Union.

So there’s a lot at stake for the Kenwood Interdisciplinary Research Complex (KIRC), which rises above the tree-line on the North East Corner of Kenwood and Maryland Avenue. No one will say it out loud, but this building is supposed to be the University’s “Calatrava.” 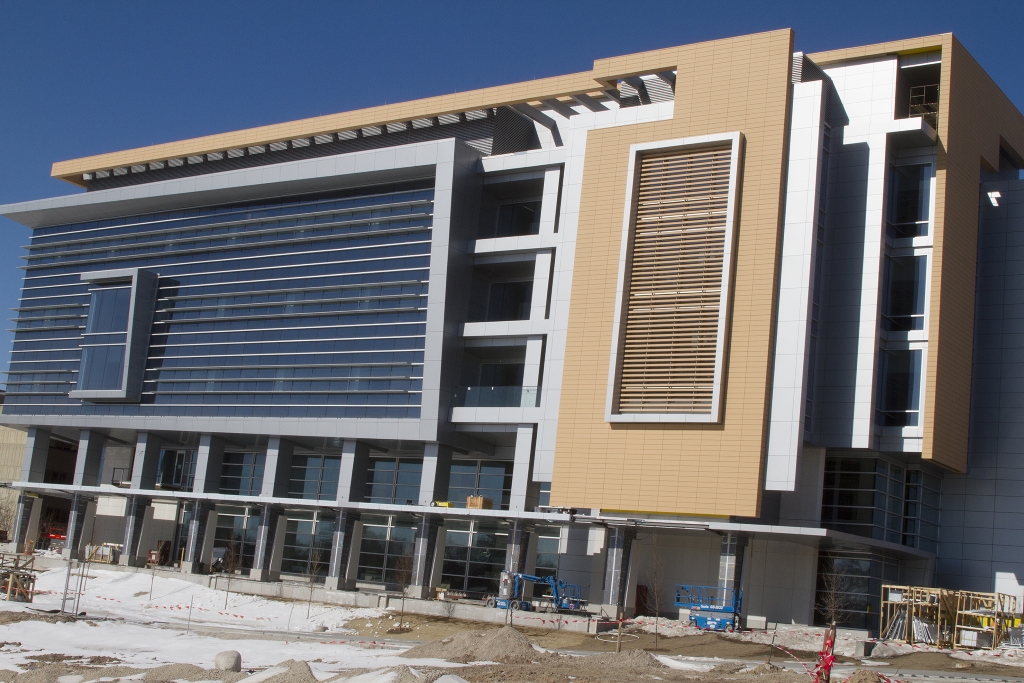 Flad specializes in laboratories  —  healthcare, and technology buildings for industry and universities.  Bluechip clients include Gentech, Amgen, Baxter International, Johnson and Johnson, and the Lawrence Livermore National Laboratory.  Flad has built seven buildings at UW-Madison, where they have one of their offices.

They were an obvious choice for the inside of the facility. “Our design aesthetic is intrinsically linked to the bright, the bold, the smart and dramatic,” Flad’s website explains, “We’re not talking about buildings. We’re talking about the people inside them.”

But Flad’s design philosophy, according to their website, emphasizes “reduced waste, maximized value, reduced time to achieve a final solution.”  That’s a little too cold-blooded for the signature part of the project. “Gateway buildings” are not Flad’s forte.

The south face, which is also the front, sports the graphic climaxes of the design that wrap around the west and east sides of the facility. A three story grill-work with a silver trim emerges out of an irregular four story coconut colored terra-cotta form that floats off an aluminum slab, that floats off another slab, which is attached to a grid of windows.

To the left, the grill graphic is flipped horizontally and amplified by tampered and angled aluminum outcroppings that jet off the left side of the building. A smaller vertical version of this element is nested inside and embedded in a field of lines carried over from the grill.  A veranda curls around the entrances at the south east and west corners of the building. A stout brisole’ zig zags across the top of the building from right to left. The supporting cast includes an assortment of columns of different materials and lengths. 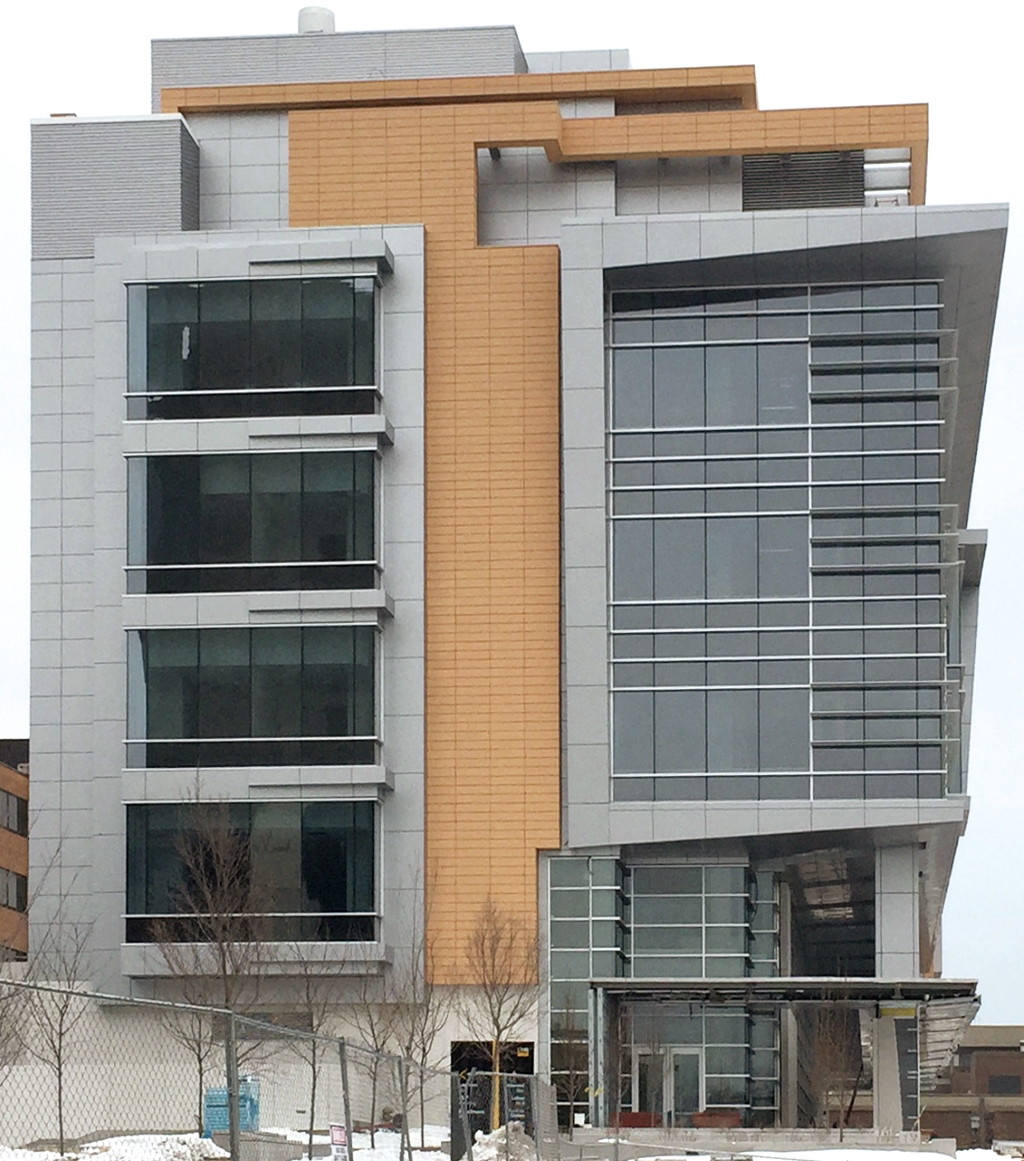 On the building’s east side another set of angled fixtures protrude from the window frames, an faint echo of the the visual dramatics on the front of the building that sweeps around the corner. A ribbon of terra-cotta runs down the middle to hold the design together.

It’s a dense work. Everything is framed and double matted. Rectangles are layered within rectangles, patterns within patterns, boxes within boxes. All the pieces are larger and chunkier than they need to be, which makes the building seems smaller than it actually is. 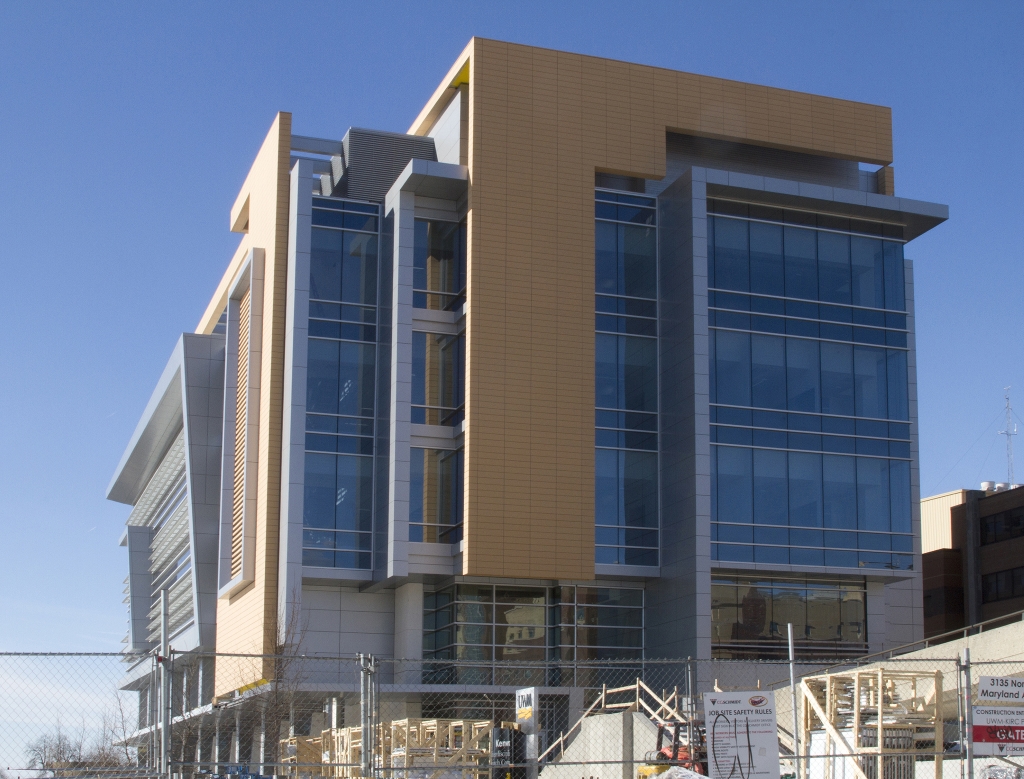 When KIRC tries to turn the southeast corner like an accordion the building begins to really unravel. You can’t tell if the ragged edges collide or overlap.  Instead of creating depth, the layers slumps the building into itself.  The main entrance falls under a fault line of the spectacle of its dangling parts.

From a distance the KIRC looks like the futuristic radios in 1930’s American homes. They were a little baroque back then, but told a zippy story. Here the narrative eludes me. A building needs a sense of itself, something you can wrap your mind around, to gain momentum to turn a corner. 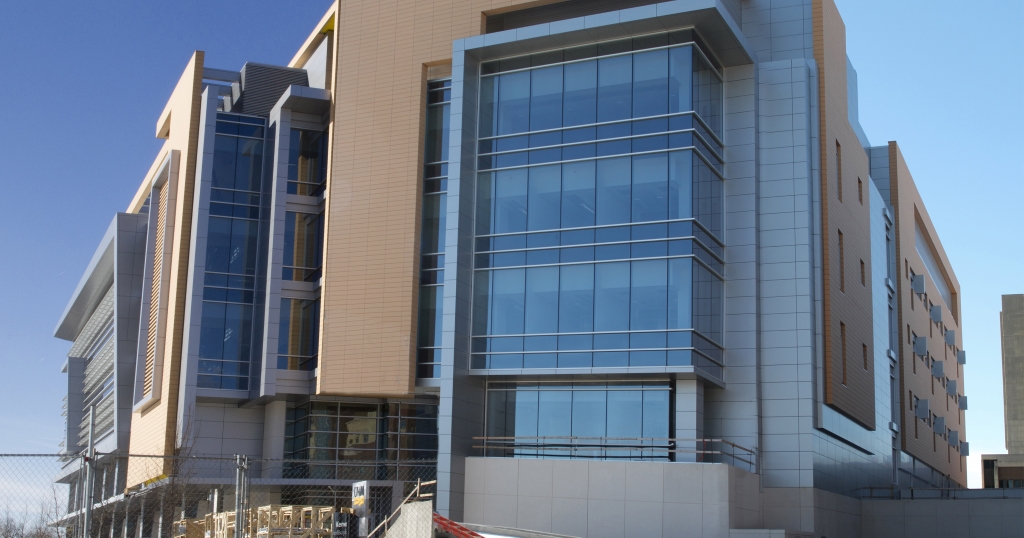 As this composite photograph showing three sides of the building suggests, there is no reason or logic holding it all together. That’s ironic for a research building that is supposed to inspire scientists to create knowledge and solve problems. This is too impulsive and random to be a science building.

The same can be said for the “gateway” goal of the project. The building lacks the stature, cohesion or confidence in itself to make a memorable impression. The KIRC doesn’t rise to the occasion. It just goes on — and on — rather than up.

17 thoughts on “In Public: UWM Tries To Do a Calatrava”