The 36-foot-high, $200,000 work was installed by Blue Cross in 1978; new owner of property won't reply to calls, artist has no idea what happened to sculpture. 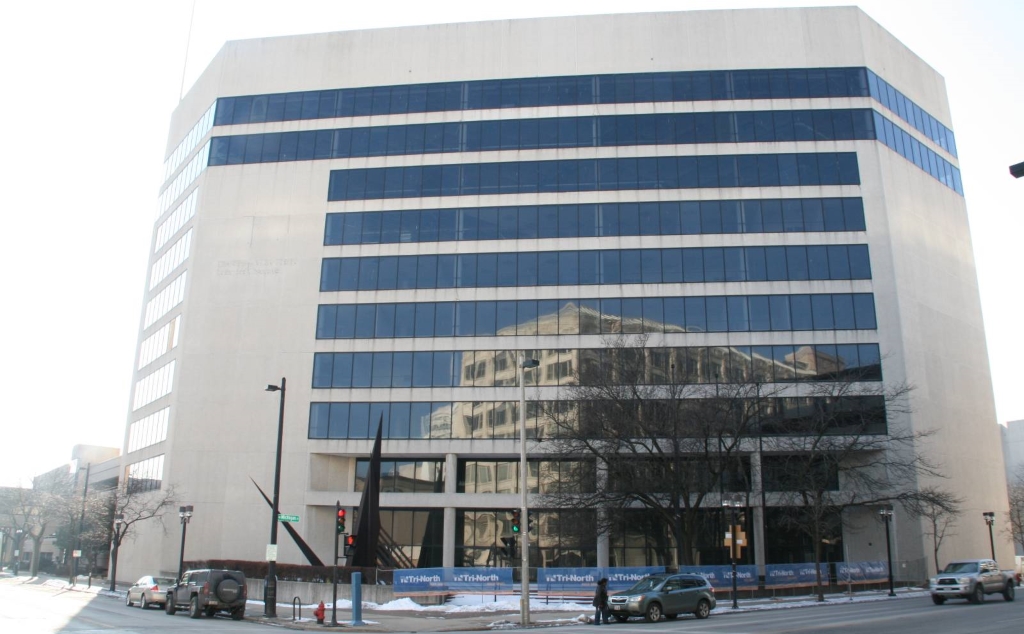 The sculpture, “Peter John,” is visible, on the left side of the plaza, in this photo of 401 W. Michigan St.
Photo taken January 23rd, 2015 by Jeramey Jannene.

A 36-foot steel sculpture that anchored the plaza at 401 W. Michigan St. since 1978 disappeared from its prominent perch at some time within the past month. Its fate is unknown, but a pair of dumpsters parked outside the former Blue Cross Blue Shield headquarters, where the sculpture had been located, provide an ominous portent.

The Brutalist-style building, vacant since 2006, is undergoing conversion to 200 apartment units and will be known as The 401.

The sculpture, “Peter John,” was commissioned by the insurance giant as a site-specific work to complement the building. The $200,000 commission was awarded to a 30-year old sculptor John Raimondi, who designed a 36ft. x 27ft. x 13ft. angular counterpoint to the severe architecture of the 11-story, 200,000-plus square foot building, taking into account the building’s beveled facade, a triangular plaza where the sculpture rested, and the large scale of the buildings in the area. The 1970s was the high point for monumental geometric minimalism in sculpture. 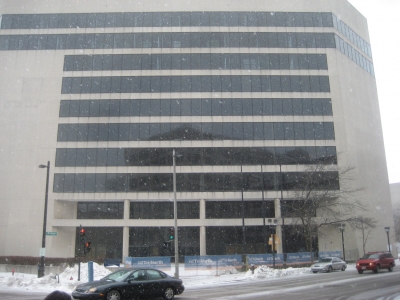 John Mangel, the developer of the apartment conversion, did not respond by telephone or email to requests for comment on what happened to the sculpture. Nor was anybody on site during a visit Friday afternoon.

If the thing had been whisked away to a factory for conservation, or relocated to a sculpture garden somewhere, Mangel probably would have been the first to say so. So, his silence is not good news.

The move took the sculptor by surprise, Raimondi tells Urban Milwaukee.  And he’s not happy about it.

“I’m sure they destroyed it,” he said in a telephone message from his studio in Palm Beach Gardens Florida. He has produced over 100 “monumental” works of sculpture in 30 states. “Peter John” dates from Raimondi’s early “Geometric Minimalism” series of the 1970s. The sculpture is named in honor of his father.

Could things have been handled differently? Yes, says Raimondi. “It’s too bad they didn’t reach out to me. I would have loved to buy that sculpture back.”

Raimondi says he would have gladly spent his own money to buy the sculpture back. Apparently, that simple win-win solution never occurred to the developer. And now, we are all losers, save perhaps Miller Compressing Co or some other junkyard or recycler.

Raimondi added via e-mail, “how sad and counterproductive. I’m one of the easiest people to reach via the internet. If the developer had contacted me, I would have had an opportunity to sell the sculpture, buy it back or help with the donation to the [Lynden] Sculpture Garden.

“In 2 years we would have celebrated [its] 40 year anniversary. The Milwaukee [Art Museum] owns the bronze model.” Raimondi created a bronze maquette or model which the museum owns.

Speaking of the developers, Raimondi added:

“They could have donated to so many people, instead they just destroyed a monumental sculpture?”

Polly Morris, the director of Lynden, the sculpture garden in River Hills that is run by the Bradley family foundation and houses one of the nation’s principal repositories of Monumental and Geometric Minimalist sculptures at Lynden, says she had learned that Mangel, the developer, did not care for the sculpture and wanted to get rid of it.

But when Morris reached out to him, she said, he did not respond to her calls.

Lynden, she stressed, does not have a budget to rescue every threatened sculpture, but with its unparalleled contacts, it could help in a search for a home for the piece.

Morris, too, is not sanguine about the sculpture’s future. Whatever Mangel has done with it, she adds, “a living artist should always be contacted” in such a case. Who knows? They might want to buy it back!

Also expressing regret at the apparent destruction of the sculpture is Barbara Brown Lee, a long-time director of education at the Milwaukee Art Museum. “It was a good one by a good sculptor,” she says.

If Mr. Mangel, the developer, hopes to hit the sweet spot demographic for his new upscale apartment renovation, he certainly doesn’t care as much about appealing to students of art history or urban design and planning. He might have kept the sculpture right where it was, and modified the plaza to be more accommodating to residents of an apartment building, rather than its original use as a place to funnel workers inside and outside of an office building.

It is unknown what is to replace the sculpture, if anything. A rendering of the building, shown on the website of contractor Tri-North (“Build Smart”), is of the west elevation only, and was of no help. (The sculpture was on the east face of the building.) It also doesn’t help matters that the project is mistakenly called “401 Michigan Avenue” by the contractor. (There is no Michigan Avenue in Milwaukee; it’s Michigan St.)

If the sculpture had been in disrepair, or damaged beyond repair, it would have been a small matter to have said so. Even the fabled Lynden Sculpture Garden has had to trash a Cor-Ten sculpture due to corrosion. A construction accident could have been explained — after all, a contractor at the Milwaukee Art Museum once accidentally scrapped a minimalist monumental sculpture by Alexander Liberman.

But that was not the case with this one. You can take Raimondi’s word for it: “I recently visited Milwaukee and looked at the sculpture. It was in perfect condition. There was no graffiti, nobody had been climbing on it.”

Indeed, a visit to the site shows no sign of corrosion or other defects at the base of what had been the three-piece work. The work was engineered to sit on a pan that drained any corrosion from the statue. “We did that so the plaza would not get stained with rust,” Raimondi said. They needn’t have bothered if the sculpture had been cast in bronze, “but Blue Cross didn’t have money for that.”

We still have enough unsolved 20th century sculptural mysteries (where is Germania? Where is the Courthouse Fountain?). We certainly didn’t need  to add a 21st century one to the mix.

Fun Fact: The sculpture resulted from a most unusual commission. The funds for the project came from a bequest to the insurance company made under the will of a customer. A plaque that on the site of the sculpture read:

The location of the plaque today is unknown. Its scrap value, if bronze, would be about $15.

Not His First Loss

Raimondi also lost a 39 foot bronze that had been at the Palm Beach Opera House, and then put into storage for a number of years. When the cost of storage became too high for the trustees, they decided to sell the thing and cut it up into pieces.

Raimondi is suing under a federal law that protects certain works of art made after 1990. He says he will file the papers sometime next week. As for this piece, he has no recourse.

What Did You See?

The site is in plain view of hundreds of apartments, offices and hotel rooms. If any reader witnessed the deconstruction of the sculpture, please feel free to contact this writer. 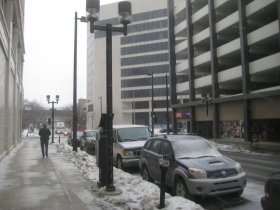 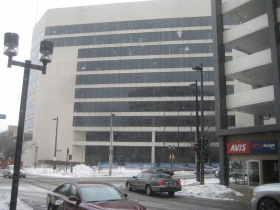 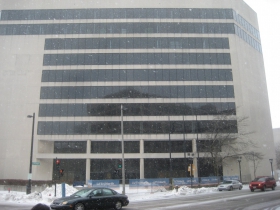 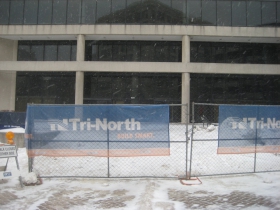 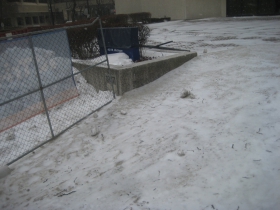 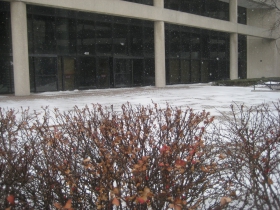 13 thoughts on “Plenty of Horne: Sculpture Disappears from Downtown”