The Mystery of the Germania Statue 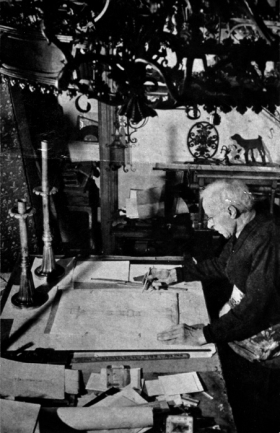 Milwaukee metalsmith Cyril Colnik won world-wide fame for the incredible artistry he brought to railings, gates, candlesticks, chandeliers and more ornamental ironwork—work that can still be seen throughout the city in the Villa Terrace Museum, Pabst Mansion and City Hall. But few know he was a mastermind behind one of the great art heists in the city’s history, snatching and then hiding a three-ton, 10-foot tall bronze statue called “Germania” from the building that shared her name on 2nd and Wells.

This was during World War I when there was civil outcry against such proud displays of German culture, and so the building’s owners asked Colnik to gather a crew of workers and bring down the statue in the dead of the night before it could be vandalized. By the next morning, the statue had disappeared and the building nameplate was chiseled off. Unbeknownst to the general public, Colnik hid the massive bronze lady in the corner of his well-known Ornamental Iron Shop, where it remained for decades.

From there, the story of what happened to the Germania statue becomes something of a riddle—one that is still unsolved. It was apparently loaned out for a convention at the old Milwaukee Auditorium around 1940, later came close to being melted down for scrap, and over the years there were alleged sightings of the statue or perhaps parts of it, and many differing stories were told about it. 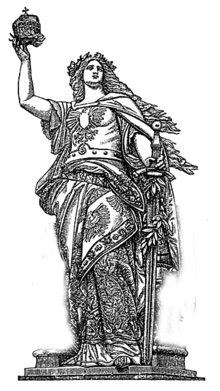 It remains one of the great mysteries of the city’s cultural history, one that has endured for nearly a century. Even as a great work of art, Germania is typically not recorded in books or the Smithsonian Institute databases (one theory had her shipped there) whereas other lost Milwaukee public art pieces are fully documented. Why Germania was kept secret reveals much about Milwaukee’s history, its once heavily German culture and a period of revulsion against all things German that altered or destroyed much of that heritage. How she may have met her demise also reveals an unwritten and tragic period in Colnik’s life. It was a monumental piece of Milwaukee history that almost seemed to disappear into thin air.

The story begins after the end of the Franco-Prussian War of 1870-1871, when the Germanic tribes came together as a nation-state to defeat Napoleon III and France. To celebrate Germanic unity, construction was begun on a massive national monument called Niederwalddenkmal, which would overlook the Rhine River. Atop the center pedestal was a 34-foot tall version of the Germania personification. The statue was eagle-armored and robed—proud and majestic with the crown of the Holy Roman Empire in one hand and a Reichsschwert imperial sword in the other. She was flanked by mythical creatures as well as angels representing war and peace.

Meanwhile, the defeated French began work on a solitary figure to honor American independence and their friendship with us that would purposefully dwarf Germania. At 305 feet from ground to torch, Liberty Enlightening the World (the Statue of Liberty’s real name) was dedicated in New York in 1886.

By that time Milwaukee was flooded with immigrants, particularly those of Germanic origin. During the European Revolution of 1848, many German families fled the fighting and arrived in Milwaukee with only the shirt on their back. In not-so-many years, many became captains of industry and brewery masters with millions to their name. George Brumder, who immigrated here from the Alsace-Lorraine region, was among the lucky ones, rising from humble streetcar track layer to bookseller to a publishing and banking magnate by 1896. His flourishing business was due mostly to the prominent Lutheran Wisconsin Synod hymnals and various German-language newspapers and almanacs he published. One of the city’s newspapers, Germania, went from a failing weekly to powerhouse daily under his guidance and melded with the Milwaukee-Herold to become “Germania-Herold” a few years later. 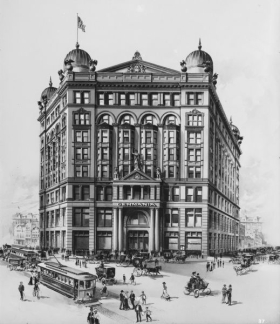 The Germania Building as she originally looked.

He built an innovative—and until City Hall was built, the tallest—building and printing headquarters at the prime downtown location of Wells, Plankinton and Second Street. He named the five-sided wonder the Germania Building, forgoing the typical family nameplate for the allegorical one instead. The building was topped with giant copper pickelhauben domes with little eagles on the roof and limestone lions beside her. Its centerpiece was a statue commissioned at a cost of $7,500 by Brumder and completed by sculptor Carl Kuehns (famous for works like King Gambrinus and Ringling Brothers wagons) to be an exact one-third scale duplicate of the Germania standing at Niederwalddenkmal in Germany.

For 22 years, she was the pride of the dominant ethnic group in a city where German language newspapers and public school classes were common. During the early days of the first World War, hundreds of thousands crowded the Milwaukee Auditorium for a Charity Bazar “for the Benefit of War Sufferers in Germany, Austria and Hungary” that raised over $160,000 in donations. They felt for the people there and sided with the Kaiser.

Then America entered the war in 1917, fighting on the other side. Suddenly, Milwaukee’s German businesses, food names, cultural events and politics were practically verboten. The Pabst Theater was threatened with a cannon until the stock theater company stopped producing German language plays. The Goethe-Schiller statue in Washington Park was covered up. Street names in German neighborhoods to the west and north were changed to new, Anglicized ones. It was a sorrowful and shameful time for German-Americans in Milwaukee.

Yet there still hadn’t been enough change for a British-Canadian war recruiting officer named Lieutenant A.J. Crozier, who could often be seen scowling in his office space across the street from the Germania building.

“The site of that statue a time like this makes me see red,” Crozier told the Milwaukee Journal.

This was the kindest thing he said on record. Crozier campaigned hard to have the Germania statue torn down and condoned another reader’s idea of melting her down into bullets “to be launched back at the Huns.”

By then George Brumder had passed away and his son, William C. Brumder was head of the family business. He was very American, a one-time football hero of University of Wisconsin and a rising Republican figure. But William also studied in Strasbourg, Leipzig, and Berlin and understood the importance of German-language publications like “Germania Kalendar.” His brother, George F., serve as publisher of these.

But the well-publicized and continuing wrath of Lt. Crozer was a problem. So William decided to be American and remove the statue.

11 thoughts on “The Mystery of the Germania Statue”