Great atmosphere, gluten-free pizza and drinks and bargain prices. What’s not to like?

When Transfer Pizzeria and Cafe opened at the corner of 1st and Mitchell six years ago there was hardly a market for gluten-free dining options in Milwaukee. The decision by Transfer’s original owners to “Defeat the Wheat” garnered much respect and admiration from the local celiac community. The Transfer brand has grown ever since and gathered fans from all across the culinary spectrum.

Transfer is the first establishment I’ve found that carries Lakefront New Grist, a gluten-free “Pilsner style beer” made from sorghum and rice, on tap. Legend has it that Lakefront owner Russ Klisch petitioned the government so that he could call New Grist a beer, even though it isn’t made with 25 percent malted barley. When I lived in Canada you could find New Grist in liquor stores across the country, with six-packs ranging from $12 to $24 (Canadian dollars). During happy hour at Transfer, 3:30 p.m.-6:30 p.m., every day but Friday, you can get a New Grist on tap for a mere $2.

The happy hour at Transfer is not limited to celiac-friendly beverages, of course, it also features another $2 Lakefront tap and $2 “Dockworker’s Special Wine Pour,” which is the best wine deal I’ve found in town. Riverwest Stein is usually the other Lakefront tap beside New Grist, but they change occasionally. When I stopped in on Monday to have dinner with my girlfriend, who is gluten-free, they were out of Riverwest Stein. In its place for the happy hour tap was a crisp Great Lakes seasonal with hints of ginger. The featured riesling and red blend, which rotate monthly, are both a ridiculous bargain at $2.

While the happy hour is strong enough to warrant a visit to Transfer, it’s the atmosphere that cements its place amongst Milwaukee’s finest. The wrap-around bar reminds me of an Italian watering hole I closed in Venice. My favorite feature is a pole covered in stickers with an authentic MCTS sign for the #15 and #52 buses. Paintings and photographs of musicians adorn the walls. The latter speaks to another one of Transfer’s strengths, live music. Twice a week musicians liven up Transfer. Tuesdays it’s the Transfer House Band and on Thursday it’s a rotating cast, with music starting around 7:30pm. (The New Galaxy Quartet plays this Thursday.)

In keeping with their celiac-friendly ethos, every Monday and Wednesday after 4pm there is no upcharge for gluten-free pizza, which is actually a tastier crust, in my opinion. Anytime on a Tuesday you can get a bottle of wine for half off. Thursdays is $5 traditional martinis (clean, dirty or cosmos) featuring Luksusowa potato vodka (gluten-free) and Bombay Sapphire gin.

Bloodies and mimosas are only $5 on Saturdays and Sundays until 3pm, with bottled beers $2 off after 4pm on Sundays. Transfer carries 30 different bottles, mostly American craft and 10 internationals, ranging from $3.50 to $8. They have one of the first American craft brews that I fell in love with, Rogue’s Hazelnut Brown Nectar, and one of the most recent European beers I’ve tried, Rodenbach’s Flemish Sour, which I had in Brussels last summer.

The last time I wrote about Transfer was for my World Cup Bar Guide. At that point they were putting the finishing touches on their second room. This space has come in handy on the weekends when they are busier than a Venetian gondola on Valentine’s Day. I took my girlfriend to Transfer on our first date back in October and we had to wait for a table. It was totally worth it. At happy hour there’s less of a wait and more of a deal. Think on that. Pensare in che. 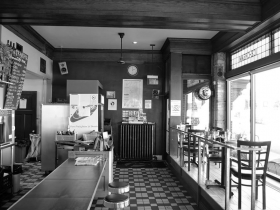 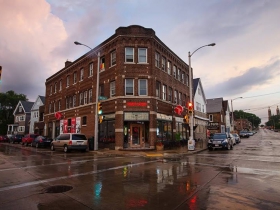 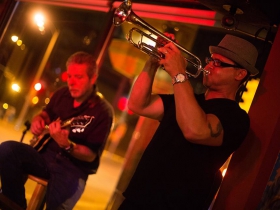 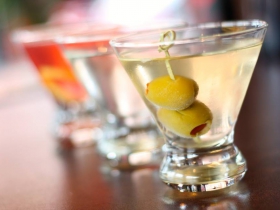 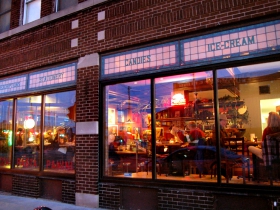 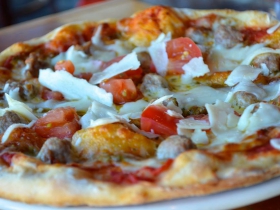