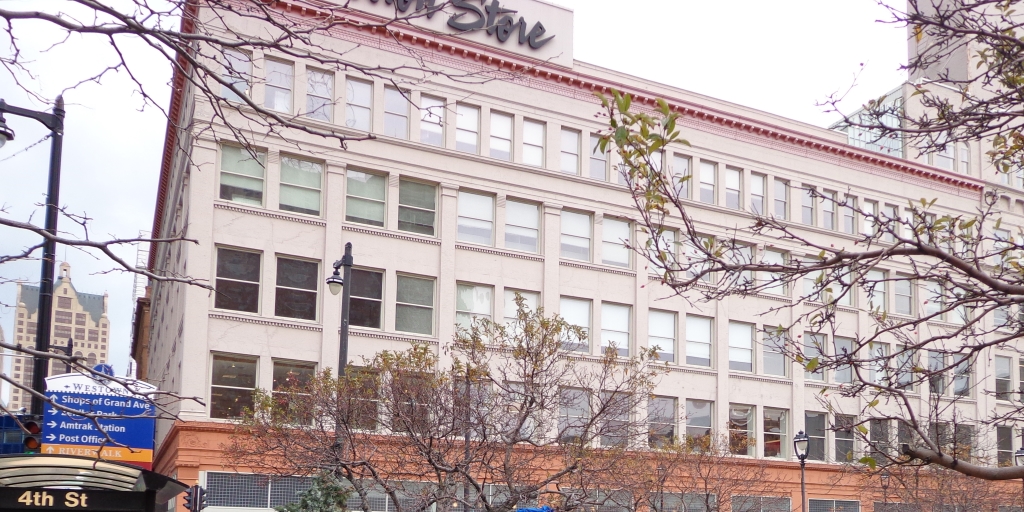 The Milwaukee Metropolitan Sewerage District on Monday agreed to pay $6 million to owners of the downtown Boston Store building to settle a 12-year-old lawsuit alleging foundation damage was caused by the district’s deep tunnel, as the Milwaukee Journal Sentinel has reported.

While this settles a suit launched in 2003 (the company’s claim for damages was actually filed in 2001), it leaves open the question of whether other downtown buildings have also been harmed by the Deep Tunnel. As Michael Horne has written for Urban Milwaukee, much of the early city was built on  marshland that bordered its three rivers. “The entire Third Ward and nearly three-fourths of Downtown stands on a swamp.” As a result many buildings were built on wooden pilings that must stay wet or they will rot. Some experts argue that water leaking into the Deep Tunnel has depleted the water table in the area, causing pile rot that in turn causes old buildings to sink, requiring expensive repairs.

Experts hired by Boston Store claimed the Deep Tunnel was dewatering downtown at the rate of 2.8 million gallons a day. Leland Jan Turk, an expert on groundwater with the University of Texas-Austin, called the tunnel a sink for groundwater, estimating it is now depleted at a rate four times greater than before the Deep Tunnel’s construction. And Charles Nelson, a consultant in underground engineering, said only a “complete lining” would stop “the groundwater inflow” being caused by the Deep Tunnel.

But Doug Cherkauer, emeritus professor of geosciences at UW-Milwaukee, served as an expert witness for the MMSD and argued that Boston Store caused the problem: “They have a well beneath the building that has served as a drain for decades,” he contended, “reducing water levels in the shallow sediments into which the building’s pilings are pushed.” He also said the owners had a sprinkling system in place “specifically to keep the pilings wet” that “hasn’t been used in decades.” This was the cause of pile rot in the foundations, he argued. Cherkauer testified that the level of groundwater is no lower near the Deep Tunnel than elsewhere.

But the other downtown buildings have had problems with pile rot, including the Mitchell Building on East Michigan Street, City Hall (where some $13 million was spent to repair piles that had been sound for at least a century), the Milwaukee Repertory Theater (which undertook a $1.75 million campaign to save its Powerhouse theater from rotting pilings) and the 1904 structure at 734 N. 4th St., located not far from Boston Store.

MMSD executive director Kevin Shafer has argued strenuously that the Deep Tunnel is not significantly depleting the water table nor contributing to pile rot. And the district spent $6.77 million on outside counsel to contest the Boston Store suit, which is more than the settlement amount the MMSD agreed to pay.

The $6 million payment “is in line with a 2006 Milwaukee County jury finding that $9 million would fairly compensate building owners for damage. The jury at that time determined that Bostco LLC was responsible for 30% of damage,” the Journal Sentinel reported, which would suggest the Deep Tunnel was 70 percent at fault.

But MMSD Commission Chair Ben Gramling was careful to note that as a part of the settlement, “the District admits no liability and the plaintiffs agree to dismiss the case.” The MMSD settled, he noted, because “it is in the best interest of our customers to settle a 12 year lawsuit over the Boston Store building to avoid additional risks, costs and further litigation.”

In short, the MMSD will bring out the lawyers again, should anyone try to make a similar claim.

One other interesting note: by terms of the settlement, there was an immediate $3 million payment to Bostco LLC, an affiliate of Wispark LLC, the development subsidiary of Wisconsin Energy Corp., which owns the Boston Store building. But a second $3 million payment will be required only if the Boston Store property is not purchased by owners of the Milwaukee Bucks for construction of a new downtown sports arena. That possible location was discussed here, but all signs point to the Bucks building in the area just north of the current Bradley Center.

3 thoughts on “Back in the News: MMSD Settles With Boston Store”