A declining water table is causing wooden piles below downtown buildings to rot. The latest casualty: a 1904 building across from the convention center was demolished. 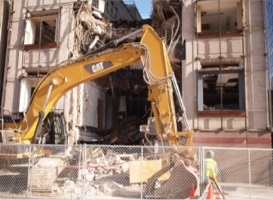 Milwaukee is a city built on thousands of wooden pilings, and when they rot, classic old buildings can begin to sink, causing expensive headaches for the owners. The latest casualty is the 1904 structure at 734 N. 4th St., with an assessed value of nearly $1.7 million, which was demolished over the fall and winter with little fanfare. And recently the Milwaukee Repertory Theater launched a $1.75 million campaign to save its Powerhouse theater, whose foundation is being threatened by rotting pilings.

The problem begins with Milwaukee’s marshy base: it was built on marshland that bordered its three rivers. The entire Third Ward and nearly three-fourths of Downtown stands on a swamp. Although it was filled in with dirt and garbage and the like, underneath it, water still flowed.

Most of the substantial buildings in old Milwaukee (some erected as late as the 1940s) were constructed on foundations of wooden pilings pounded into the earth, often by Edward E. Gillen Co. The pilings would extend through the filled-in dirt into the ample water table about 10 feet beneath grade and then into the swampy soil found beneath that. The pilings were expected to remain submerged and be sound for centuries. Some buildings – such as City Hall, Northwestern Mutual Life and Boston Store – have underground irrigation systems to ensure that the pilings never dry.

But in recent years, the water table has drained away, exposing the pilings of many buildings to the air. Thus, they decay – the technical term is “pile rot.” As their structural foundation degrades, the buildings could meet with catastrophic failure.  Many, such as the Mitchell Building on East Michigan Street, have required extensive repairs. It has cost City Hall, built in 1895, some $13 million to repair piles that had been sound for at least a century. 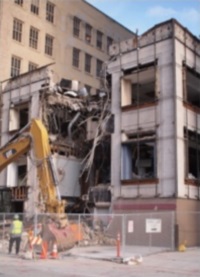 Where did the groundwater go that once kept the piles from rotting? Dennis Barthenheier, a contractor who for 30 years has specialized in foundation rescue, blames the Deep Tunnel: the 28.5-mile sewage and stormwater tunnel that runs 135-300 feet below the city, beneath the marshland that Milwaukee was built upon. The Deep Tunnel is divided into three sections that extend from Downtown, giving this part of the city great exposure to its effect on the groundwater. The tunnel is so porous that huge amounts of water from the old marsh are seeping into it each day, lowering the water table and exposing the old buildings’ supportive timbers to pile rot. “It’s the Deep Tunnel that’s dewatering Downtown and the Third Ward,” Barthenheier has argued.

The Milwaukee Metropolitan Sewerage District disagrees. Its experts have suggested that the “overloading” of downtown with too many buildings, and the presence of uncapped, underground wells has caused the problem. Cracks in the unlined portion of the tunnel reseal themselves through calcification, they contend.

Meantime, the owners of downtown buildings must deal with a rotten problem.

The 1904 structure at 734 N. 4th St was a solidly constructed reinforced concrete building that sat directly across from the Wisconsin Center convention facility. The tax-exempt building was valued at $1,688,000, sitting on a 7,800 square foot $312,000 lot. It was owned by the Mental Health Association in Milwaukee County, which had its offices there as recently as 2009. At that time the Milwaukee County Behavioral Health Division leased the third floor of the building for $90,000 annual rent. By the time the building was demolished it had been vacant for some years.

Why was the readily adaptable building destroyed? The Mental Health Association did not respond to repeated requests for a comment. The City of Milwaukee Department of Neighborhood Services Condemnation Section, which issued the permit for the demolition in autumn, 2013, said only that the demolition contractor told them the roof had been leaking. This condition might prove catastrophic for a frame cottage, but ferro-concrete structures are not that easily deterred. There are scores of them in this city that managed to survive decades of neglect without needing to be razed.

So I called Barthenheier, who told me, “I went into the building for two potential buyers of the property. I told them both the same thing. The foundation was rotted. And the only renovations they could do to that place would have to be done by a bulldozer.”

The building had an interesting history. For about 30 years it housed the Milwaukee Journal newspaper, which partly explains its massive construction to accommodate heavy loads of printing presses and paper. By 1930 the paper had moved to its magnificent new building at 333 W. State St., where the Milwaukee Journal Sentinel’s offices remain. (The printing plant has since been diverted to West Milwaukee.)

In that Depression year 0f 1930, the “Goodfellows of the Milwaukee Journal,” a charitable arm of the publisher, arranged for the paper’s old building to serve as a shelter to “feed and house the poor and needy unemployed under the supervision of the Salvation Army,” according to Common Council Resolution 45855. The building was to offer sleeping accommodations for 190 men. No smoking was to be allowed, except in the basement.

By 1943 the building was the home of the USO. “It’s a place to lounge, to meet good pals, to turn on the radio, to write to a best girl, to drop in for a snack,” an advertisement read.

At the end of the war, the place was bought by the Title Guarantee Co. of Wisconsin for $95,000. It served in that capacity until 1994 when the Mental Health Association in Milwaukee County paid $350,000 cash for it, along with a gift of $340,000 from the building’s owner, the Chicago Title Company.

It served around that time as the headquarters for the group and as the Grand Avenue Club, an agency founded in 1991 based on the “Clubhouse Model” to provide employment for the mentally ill. The building and its tenants attracted little attention until the development of what was then the Midwest Express Center across the street. Perhaps there were some in the community concerned that such a social service agency located across the street from a tourist attraction might not be a good thing. That was certainly the impression I got at the time from visits to the club facility and discussion with its management. In 2001 the club moved to the magnificent 1850s Bank of Milwaukee Building at 210 E. Michigan St., directly across from the Mitchell Building, the foundation of which Barthenheier rescued, devising a clever system to rebuild the foundation of the 1876 building.

Barthenhieer has looked at a lot of foundations in downtown Milwaukee and back in February 2012, when I did an earlier story for Milwaukee Magazine about the problem of pile rot, he predicted that the Milwaukee Rep would soon encounter problems. Sure enough that has come to pass. The Journal Sentinel’s article on the theater’s structural problems accepted at face value the sewerage district’s statement that the effect of the Deep Tunnel was “minimal.” The paper made no mention whatsoever about the demolition of its former headquarters.

Experts hired in a lawsuit over the settling of the Boston Store building — just one block south of the recently destroyed structure on 4th St. — claimed the Deep Tunnel was indeed dewatering downtown at the rate of 2.8 million gallons a day. At that rate, the Deep Tunnel would fill itself twice a year even without rainfall. According to the First District Court of Appeals decision ruling in favor of the building’s owner, a subsidiary of We Energies, “It is obvious that the District was on notice that the Deep Tunnel was severely dewatering the downtown area and causing property owners … harm.”

Doug Cherkauer, emeritus professor of geosciences at UW-Milwaukee, served as an expert witness for the MMSD and says of Boston Store: “They have a well beneath the building that has served as a drain for decades … reducing water levels in the shallow sediments into which the building’s pilings are pushed.” He says the owners had a sprinkling system in place “specifically to keep the pilings wet” that “hasn’t been used in decades.” This was the cause of pile rot in the foundations, he argued. Cherkauer testified that the level of groundwater is no lower near the Deep Tunnel than elsewhere.

But several experts who testified on behalf of Boston Store disagreed. Leland Jan Turk, an expert on groundwater with the University of Texas-Austin, called the tunnel a sink for groundwater, estimating it is now depleted at a rate four times greater than before the Deep Tunnel’s construction. And Charles Nelson, a consultant in underground engineering, said only a “complete lining” would stop “the groundwater inflow” being caused by the Deep Tunnel.

One additional postscript: In recent years, city crews have worked to shave or “scarify”  the protruding edges of sidewalk slabs in the Third Ward. Careful observers will note manholes that stick up like iron thumbs where streets and alleys have sunk around them and curbs protruding above receding sidewalks. Is this too a cause of the city sinking as the ground water beneath it is depleted? City officials have denied this, saying the differential settling in the Third Ward is found in other areas of the city and is caused by the “freeze-thaw cycle” of Midwestern winters.

7 thoughts on “The Sadly Sinking City”