Pieper Properties has restored and renovated the historic Mayer Building at 342 N. Water St., one of Milwaukee’s terra cotta gems. This is an inside and outside job, on the 112,528 square foot structure at the southeast corner of N. Water St. and St. Paul Ave. This weekend, Gallery Night visitors will be able to see the results for the first time, accompanied by the unveiling of a commissioned tapestry by Wisconsin-based artist Terese Agnew.

The old commercial building that once housed the offices of a boot and shoe company and later the Renaissance Theatre, an art store and much more over the years, had been somewhat degraded during the decades.

Pieper Properties, Inc. to the rescue!

During the last couple of years, the company has given painstaking attention to some very intricate and expensive exterior and interior renovations. Little odds and ends of the terra cotta ornament on the north side of the building, located across the street from the Milwaukee Public Market, were restored after being in derelict condition for years. Windows were opened, new spaces created and the whole enterprise, resting on timber piles in the swampland that is the Third Ward, was generally brightened and improved by Barthenheier Construction Co.

Once developer Ann Pieper Eisenbrown dug through the many layers of the building, she uncovered the sediments of history. Her father, Richard Pieper, commissioned Agnew to create a tapestry that would hang in the building’s lobby relating to the theme of the structure and its place in history.

In a press release, Pieper Eisenbrown noted, “When renovating, decades of workmanship and materials are uncovered. The Mayer was constructed in 1910. As a renovator, you end up with a greater appreciation of the past and the impetus to contribute to efforts that will endure into the future.”

That history was enough to set Agnew on her course to create a piece that is site-specific and true to the Piepers’ mission. The 12-by-7-foot tapestry will be unveiled at 6 pm on Gallery Night, Friday October 17th. There will be no sneak preview (other than the photographs that accompany this article), because the work is still in progress by Agnew and her assistants Andie West and Sara Harris, working at Agnew’s studio in LaFarge, in rural southwest Wisconsin, that lovely portion of this state known as the “driftless region” or for some, as “God’s Country.”

Agnew has been working as an artist for decades, and her work evolved from sculpture to densely embroidered quilts, which can take thousands of hours to complete. Her most notable quilt is “Portrait of a Textile Worker,” constructed of thousands of clothing labels stitched together, contributed by hundreds of sympathetic individuals, labor organizations, Junior League members, students, retired and unemployed workers from across the globe. The resulting is a powerful image of textile workers made from these clothing labels, that also comments about the exploitation of laborers. Agnew discusses the creation of that work here.   Agnew’s quilts are included in permanent collections of the Smithsonian American Art Museum, the National Gallery, the New York Museum of Art and Design, Oxford University and the Milwaukee Art Museum, and she was recently featured in a show at the Museum of Wisconsin Art.

So what is her latest creation, we asked, and she forwarded these thoughts:

“Settlement” is a collage (12’ X 7’) but I like to think of it as a large sketch or diagram. In it I invented patterns representing the last 380 million years under one building: 342 North Water Street. I’ve had an idea like this for years — I mean, not 380 million but almost that long. It started when (husband) Rob Danielson and I renovated a building on South 13th Street. Trying to plant a tree in the backyard was like busting out one hundred year old fill for the first 3 or 4 feet. It was fascinating.”

“The entire Third Ward was originally a swamp, subsequently filled in with soil from the surrounding bluffs, much to the dismay of the Potawatomi inhabitants. The center portion of my work shows fragments of the wetland and near-by rivers that once occupied the neighborhood. Inverted hills hover somewhat menacingly in cracked pieces over images of water.

This all started last May when Richard Pieper asked if I would consider creating an artwork for the Mayer Building before Thanksgiving. I jumped at the chance — immediately envisioning millennia stacking up beneath its foundation. It was the perfect site for a chance to try out ideas that had been simmering for a long time. I started the piece in June and worked with art students Andie West and Sara Harris- cutting, gluing, drawing and stamping layer upon layer upon layer.”

“Ann Pieper, who renovated the building, did so with the greatest of care for its history, the environment, the building’s future tenants and smart long-term energy use. This was right up my alley after renovating two Milwaukee homes with Rob before building a completely energy efficient home and going solar in Southwest Wisconsin. I really admire Ann — she’s saving beautiful, significant landmarks so they can be lived in, worked in and admired for another 100 years. It’s not easy to do.”

Agnew added this note: “Re: The Piepers — they have supported my artwork and many outstanding artists and art for decades. They have generously ensured that anyone will be able to see the artwork in public institutions in perpetuity. Settlement is the beginning of a series that that I’ve been thinking about for a long time and I loved having this opportunity to try something different, more immediate.” 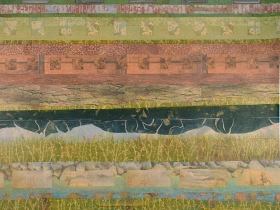 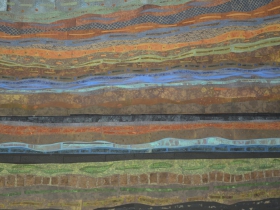 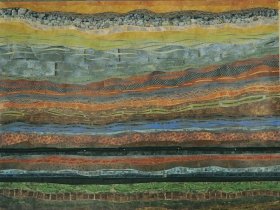