The Modernist downtown property has a history of transition, and one heck of a view.

During my time with ThirdCoast Digest (now Urban Milwaukee Dial), I invited myself to the middle of the Hoan Bridge during the UPAF Ride for the Arts and celebrated Urban Milwaukee’s anniversary at the rooftop bar of the Milwaukee Athletic Club. I attended Doors Open Milwaukee for the views, and attended a goodbye party on the rooftop of the Clock Shadow Building for the Fifth Ward perspective. Each one had a vantage point, whether high or low, but they also were generally accessible.

My mission for this project is part historic and part artistic. I have been securing permission to some of the best vantage points in Milwaukee that heretofore have not been widely seen. Over the coming weeks, I will share with you what I find. 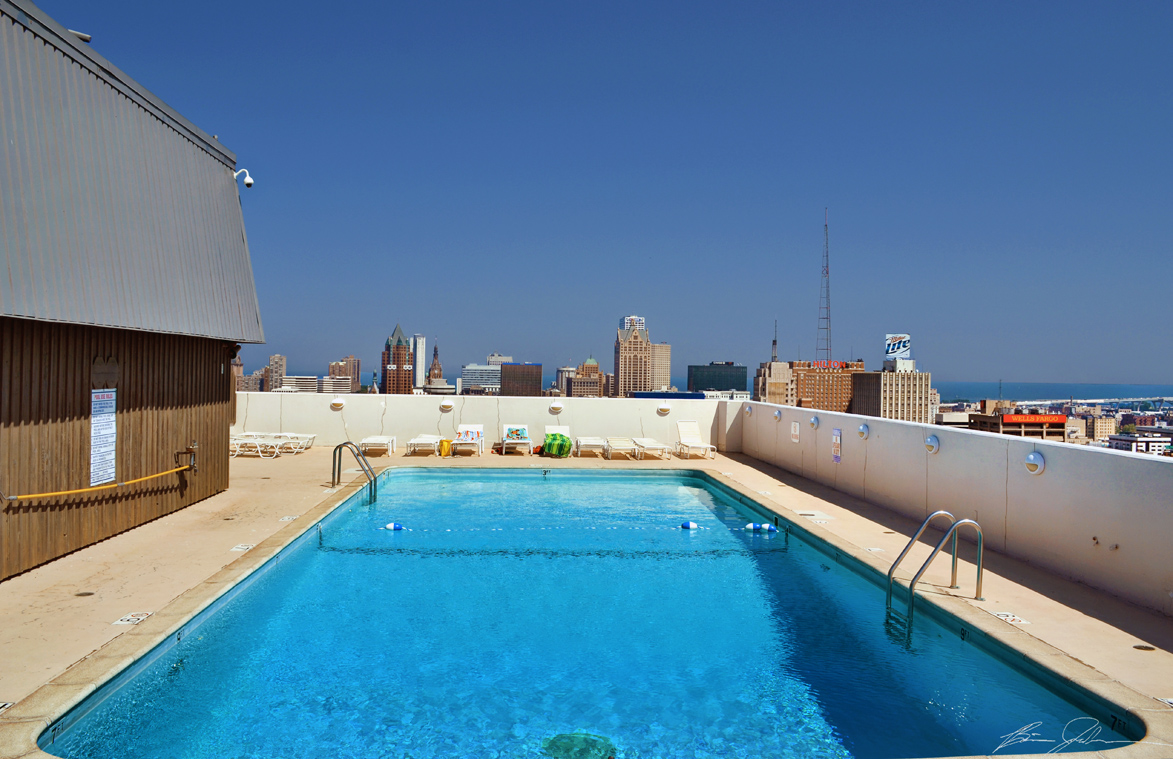 The Catholic Financial Life (previously Catholic Knights) Building at 11th and Wells Avenue started construction on its nationwide headquarters in 1965 and finished five years later.  The insurance and financial services company merged then with Catholic Family Life Insurance (CFLI) — which itself had previously merged with several similar life insurance companies to become the oldest and second largest Catholic not-for-profit organization of its kind in the United States.

The Catholic Knights organization previously occupied a building exactly one block south on Wisconsin Avenue. They wanted to build elsewhere, adjacent to Marquette University, but city restrictions on private construction during urban renewal efforts in the 1960s restricted their options.

A “tourist tower” site at Broadway and Wells was considered, but rejected internally.  Finally, the city granted an exception and re-zoned the present site overlooking the still-new freeway system just for Knights. Almost directly east on the other side of the freeway stands the County Courthouse.

A rooftop pool opened with the “Knights Tower” in 1970 to middle-income residents (rent was $124 a month for efficiencies and $151+up for one bedrooms) along with a cocktail lounge on the ground floor — hints of which can still be seen in the lobby. The next year, three top executives for Catholic Knights died in a plane crash at Mitchell Airport. The society commemorated their lives by wrapping a huge ribbon around the building, and put on a fireworks display.

The Modernist Catholic Financial Life Building still cracks the top 40 of tallest buildings in Milwaukee at 219.82 feet, with 18 floors of usable office space and the “Tower Apartments.” The ground floor also contains the All Saints Chapel (dedicated in December 2010) and most recently, the legendary secondhand bookstore Sweeney’s, which had to leave its prime Marquette location in 2013 when major redevelopment interests near the heart of campus forced them to move. On what would be the 20th floor of the building, there is a 7-foot-deep heated pool and picnic area. 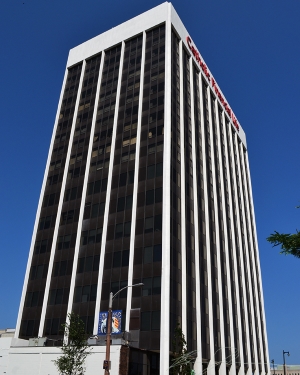 The pool area, a result of a rehab from its original 1970s layout, takes up nearly half the rooftop space and is open to residents and their guests only (interestingly, no full-time undergraduate students are allowed to rent). It appears as if the surrounding walls have been buffered to shoulder height. While there are lounge chairs and round picnic tables, there are “No Diving” and “No Grilling” signs prominently displayed.

To the West, looking through the summer haze, you can see Miller Brewing as well as Miller Park and the Mitchell Domes. To the South, past the valley you can see St. Josphat’s, St. Stanislaus and a forest of other steeples. Zooming in with my lens, I can see clear into Greenfield.

But the view to the East is the one to behold here. You can get clear view of the traffic on the Hoan Bridge, the jumbled jungle of the Westown and East Town buildings, the gleaming new Moderne and University Club Tower, the UWM area right up to Whitefish Bay. I can clearly see the rooftop of the Central Library, which will be featured in next week’s photo. You can see the detail along the courthouse roofline, which I have never noticed before, but appear to be owls.

My “one-shot” photo at the top of this article is a study of the skyline as seen from the western edge of the pool. I will admit two things: first, I used a stepladder since most of the skyline is obscured by the taller exterior wall. Second, there was a trio of young women in bikinis in those chaise lounge chairs, but when I told them of my project they politely moved rather than be involved. 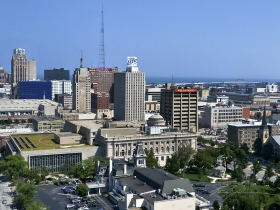 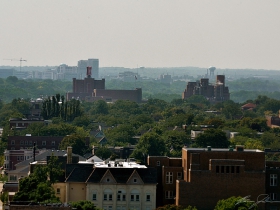 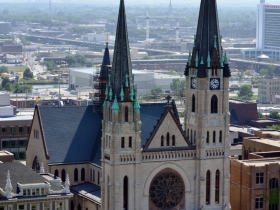 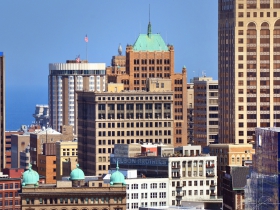 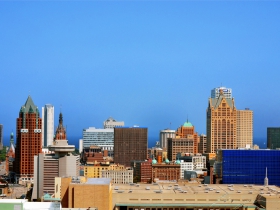 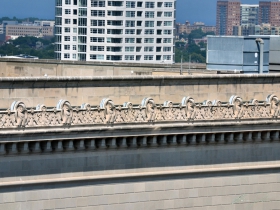