From The Railway Exchange Building

Built in 1901, the classic, 12-story building is well-situated for great views of Downtown and the old and new city. 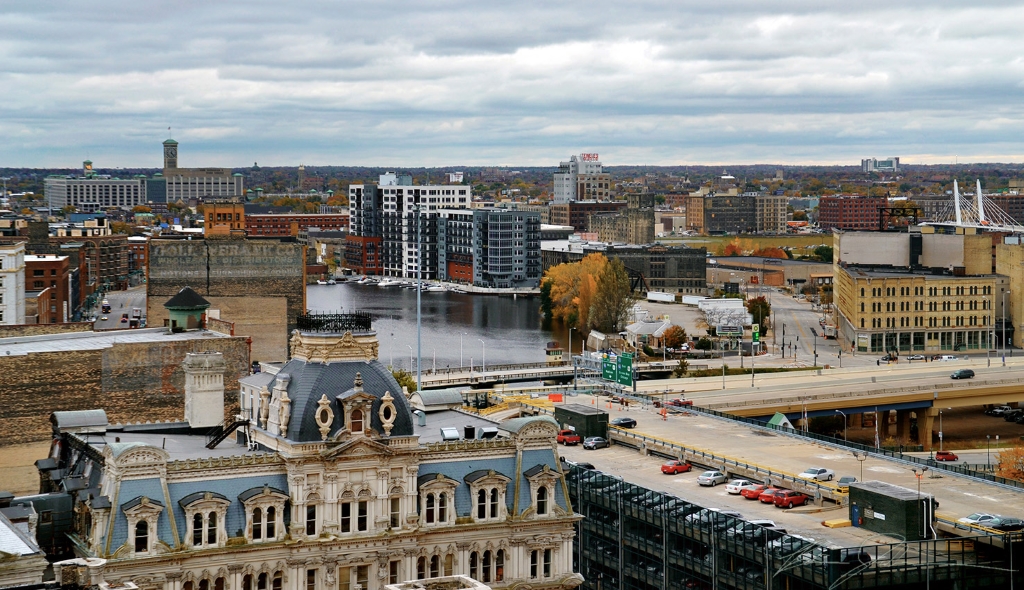 View from the Railway Exchange Building. Photo by Brian Jacobson.

About the View: It’s an overcast day in October when building owner Patti Keating Kahn and I creep out onto the roof of the venerable Railway Exchange Building. There is much construction and rehab going on throughout the structure— so we almost end up giving an electrician a heart attack at the sound of our voices.

There has been a lot of attention paid to this old steel-frame and terra cotta high-rise in the past few months: as other buildings are in danger of sinking this one is firmly set on deep wooden pilings, the façade is being restored thanks to a grant program, and at the base corner where the most prominent renovation is going on, what was last a Quiznos (and for a while the Milwaukee headquarters of President Obama’s 2012 re-election campaign) will become a Pita Pit. Inside the 113-year-old walls, Milwaukee Film is still in the afterglow of a successful festival, H. Russell Zimmerman is doing some architectural consulting and other tenants bustle to and from the Art-Deco styled elevators.

This neoclassical building has seen many changes and lead tenants over the years. Designed by renowned architect/engineer William LeBaron Jenny for businessman Henry Herman, by 1906 it was renamed as the headquarters of the Chicago and Northwestern Railway (and for a time during World War I, the Milwaukee Road offices as well). That residency was done by the end of World War II, and various companies followed with the last owners before Patti (and husband Charles Kahn) being the Legal Aid Society, which owned the building from 1993-2004. 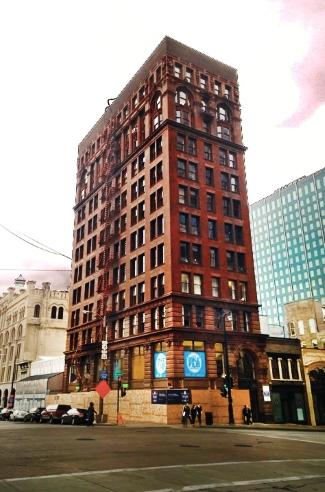 Now, after successful work on her Colby Abbott Building, Keating Kahn is working on restoring this 12-story spot at E. Wisconsin Ave. and N. Broadway. I point out to her all the various neighbors that have their own private rooftop patios set up, the forlorn beauty of the clock tower on the recently purchased Grain Exchange building, the tantalizing crow’s nest peak on the 100 East office building and the rail line bending south and far into the horizon line.

Although it’s quiet and overcast up here, it is perfect weather to contemplate Milwaukee’s historic and mighty past with the rapidly-approaching future. It is hard to imagine what things looked like before the rapid changes of the 1960s (even on the building itself, which before then had an elaborate roof cornice design), and it is difficult to imagine all the shiny, glass-covered structures that will pop up in the next few years.

What has always been a part of the Vantage Point photo project, as I envisioned it, are the colliding street angles, the colors and textures of the brick, neighbors sharing ornate and minimalist styles and the sweeping mash-up of the modern with the classic. You can see where structures like the Wells Building (See both its historic and modern interior) made changes and additions on the upper floors that decorated its facade soon after construction in 1901, only to lose some of this elegance in 1960 as decorative terracotta features were removed for safety reasons. Many older Milwaukee building facades have been covered and recovered, while inglorious parking structures now become new office and condo skyscrapers.

From this fair height and key location, I can both appreciate what the city must have felt like then as well as imagine what is yet to come. 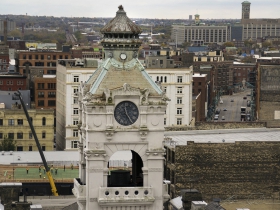 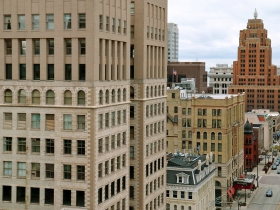 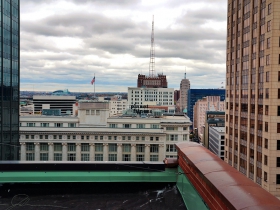 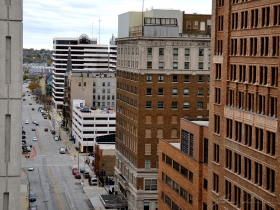 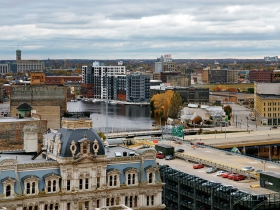 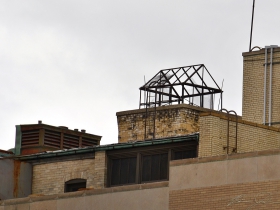 One thought on “Vantage Point: From The Railway Exchange Building”