“Anywhere you hang your hat is your home”

Art Guenther has run Just Art's for 34 years, and mostly enjoyed it, though he's kicked out customers, including Jeffrey Dahmer. 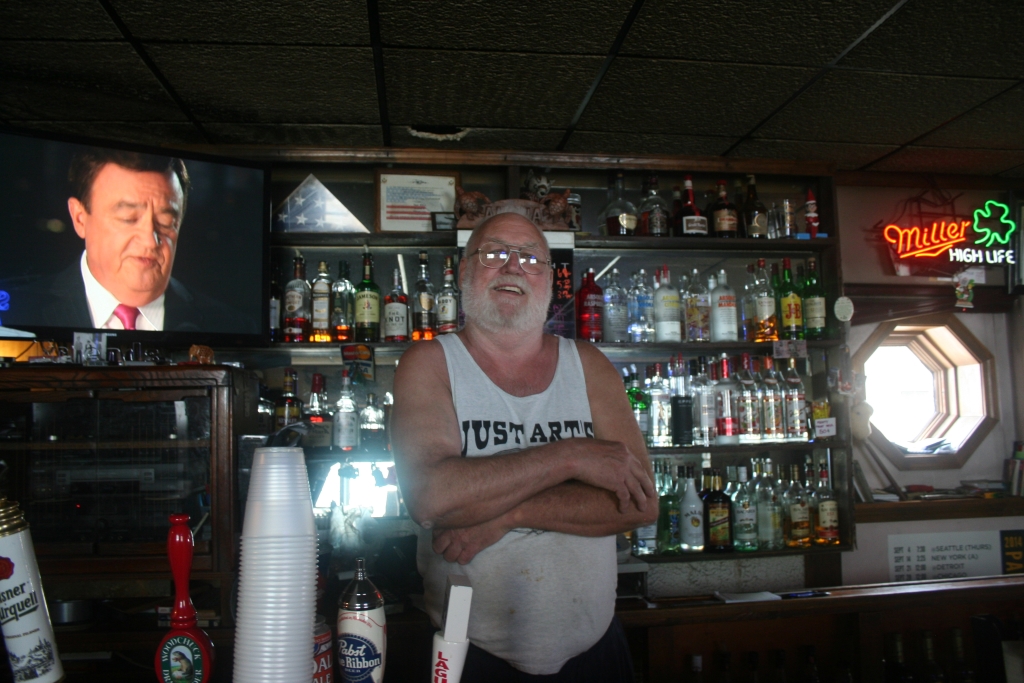 Art Guenther at the bar of Just Art’s in Walker’s Point.

Guenther, who grew up on 15th and Clarke, has owned the establishment for 34 years. He came back to Milwaukee in 1975 after spending four years in the Armed Forces and attending college in California and he’s been here ever since. “My mother died at 48, my brother, Ronnie, who’d served in ‘Nam in the Army, comes back, gets married – I was his best man – I went back out to California and he drowned in Lake Michigan,” says Guenther. “So, there were reasons to come back, family reasons.”

As for Just Art’s, Guenther says he really “backed into the bar business.”

“I was doing carpentry work and a buddy of mine had the building so he hired me to slap a roof on cause there was a fire here and then I took the building over and breathed life back into it.”

And Guenther, a self-proclaimed creature of habit, seems to have found a niche. “I have a lot of the regular customers, same people – I’m comfortable with them. If I don’t seem to like somebody they realize it and don’t come back. Part of me cares, part of me doesn’t.”

Though he knows, as a bartender, he might not be everybody’s cup of tea, the people who do like the place know what they’re getting and everyone is welcome. “I’m a talker but I don’t know all the drinks and, people that come here, they understand that.”

“My attitude about anybody is: you don’t give me any sh*t, I won’t give you any sh*t. You give me sh*t, I’ll give you sh*t back…live and let live is my attitude.”

In fact, Guenther says, for a long time, Just Art’s was the lone “straight” bar in a district that used to house Milwaukee’s gay bar scene. “It was kind of a kick, though. The 219 Club, they would get a cabaret license and they would put these shows on – these female impersonator reviews – and after the show was over, since we have food here, they’d come over here in their dress looking like Cher or Marilyn Monroe…it was cool.”

Guenther has had a lot of interesting interactions but one that sticks out is when the Milwaukee Cannibal himself, who Guenther says found a lot of his victims in that area, found his way into the bar. “I met Dahmer in here, he came in. I didn’t know he was ‘Dahmer,’ then; just some goof who came in, wouldn’t buy a drink and bothered my customers so I kicked him out.”

What did he feel when you found out who it was? “Nothin’,” he says. “I kicked a lot of people outta here.”

Guenther’s business is people and he’s met a lot of them over the years, including former Mayor John Norquist and Dave Begel, then writing for the Journal Sentinel. But Guenther says status doesn’t matter to him; it’s the person that matters. “I find interesting people as, you know, post office workers or whatever they do in life…and their personalities and their attitudes.”

What’s next for Guenther?  He’s had a couple offers to buy the place but isn’t sure what he wants to do. Part of him wants to buy an RV and just get out; he wants to see Burning Man before it’s gone. But part of him loves his life here.

“I like my job now because I only open at 4 o’clock Tuesday through Friday, Saturday at 8 o’clock, I don’t work as many hours, I can do whatever I want with my time when I’m here. I also, still, am working on several projects. I have that little building next door – I’ve been ripping it apart for years. If I stay in Milwaukee, I’ll live over there; I’ll rehab it to a back living quarters, an apartment for rent and a storefront.”

“I could sell tomorrow…but one minute I want to sell, the next minute I don’t.”