“I have no trust in the judicial system.”

Lu Ann Will's mentally-ill son was shot by police answering her call for help. She still doesn't understand how it happened. 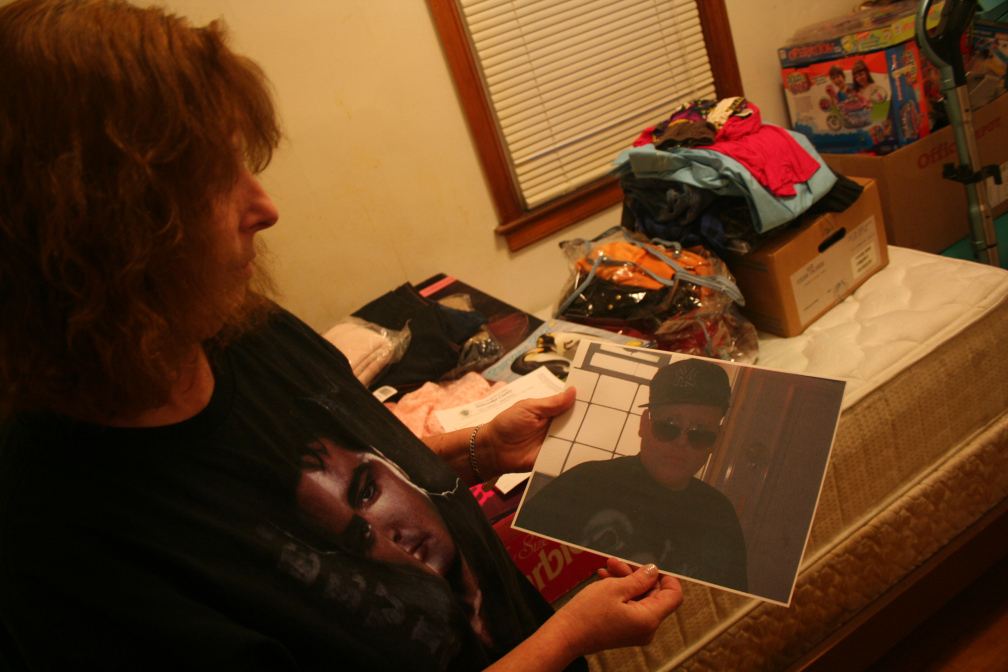 LuAnn Will holds a picture of her son, Joseph Lee Walker, who was shot three times by Milwaukee Police in April.

LuAnn Will’s home at 2659 S. 15th St. sits in the middle of a long dead-end block in Milwaukee’s Polonia neighborhood, inconspicuous except for the bullet holes that litter the front porch and the “We Don’t Call 911” sign displayed in her front window. Will talks about her son, Joseph Lee Walker, as she shows where – porch, front hallway, bedroom – the dozen or so bullets left their mark, constant reminders of that night in early April when Walker was shot three times by Milwaukee Police.

Fearing for her life after being threatened by Walker in the midst of what she describes as a psychotic episode, Will was the one who, eventually, called police non-emergency. She only wanted her son, who’s suffered from addiction, depression and mental illness for most of his life, to get the help he needs. She could never have imagined what would happen next.

“He had suffered a psychotic episode, that night – he threatened to murder me and himself if I didn’t get my Ambien,” says Will. According to her, Walker had been prescribed the drug, which is used to treat insomnia and other brain disorders, but had also been getting pills off the street because he would sometimes take as much as 300 milligrams – 15 times the normal dose and the amount of his entire monthly prescription – in one night.

“This wasn’t my kid, that night. So I knew I had to get out of the house and call the police for him to be taken to (Milwaukee) Mental Health,” Will said.

So she left the house and went to a friend’s not far away, near 17th and Morgan. “She’s known my son since he’s been born,” said Will, referring to her friend, “and I told her, I says, ‘He’s threatening to murder me and himself.’ I said, ‘I’m really scared’ … ‘It looks like the devil jumped in him, for chrissakes.’”

Will’s friend encouraged her to call the police. Will says she called the non-emergency number precisely because she wanted to avoid an over-reaction. “I told them, ‘He has mental health issues, he’s suffering a psychotic episode, I need somebody to come out and take him out to (Milwaukee) Mental Health because he’s threatening to murder me and himself,’” says Will.

With the help of police, a plan was formulated. Will would meet them around the corner from her home near 15th and Cleveland. She would, under the guise of providing Walker with the drugs, attempt to get him outside of the house so police could then apprehend him.

“They gave me a fake paper bag that had nothing in it. So I come down my street, made a U-turn and parked in front and junior, Joe Jr, came out to my car to come get the pills, which I did not have. And I told him to get in the car cause that was the plan,” says Will, of her 12-year-old grandson. “So, I’m tellin’ Junior, twice, ‘Get in the car,’ and my son was out on the porch, too cause he followed his son – his son came out, first, then he came out.”

Joseph Lee Walker has a long history of mental health issues and has been prescribed drugs from a young age. “Ever since he was a little kid he couldn’t sleep,” Will says. “Seven years old it started. Yeah. He was on Xanax, at that time.” The now-31-year-old Walker also suffers from bipolar disorder, Will says.

Back then, Will was on welfare (AFDC in those days), so she wasn’t always able to provide Walker with what she thought he needed. “I was limited to what resources I could use, being on an HMO and bein’ on welfare, you know. So, I was limited on, you know, hospital stays, for instance.”

“He would isolate himself; he was so young and he was isolating himself in his room – he wouldn’t come outside and play with anybody, he couldn’t go to school and noises bothered him, even. Sometimes he’d have to shut the TV off and be in the dark for a while. It was just really, really bizarre,” she says.

Even when it got worse, Will simply wanted to find something, anything, that would help her son. “At 13, he got so out-of-control I had to file a CHIPS petition on him, which is Child In Need of Protective Services. So, that was supposed to help me a little more by getting the courts involved and getting more help.”

But, she says, filing the petition just didn’t do what she’d hoped it would. “I don’t think there was enough resources. I think he should have been in the hospital longer – three weeks wasn’t long enough, you know? I mean, yeah, he was 10 years old but he came home the exact same way.”

So, by the time Walker was 16, Will thought it would be good for him to spend some time in a different setting. “My son, just, the only things he didn’t do was go to school and be in the house by 10 o’clock – those are the things that he had to do and wouldn’t do it. So, had him out at Lad Lake for three months, he was workin’ out, he was getting good grades.”

By 2002, Walker was working at Walmart. But, that year, he lost his job there and Will says he never really found another one. “He had, uh, temporary jobs through temporary services,” she says.

Then, according to Will, when Walker’s son was four months old, the child’s other grandmother brought accusations to the District Attorney and Walker received a misdemeanor for fourth degree sexual assault. “And, every time he went to go find a job, that would come up. He couldn’t get a job anywhere. So, I think that’s where his spiral began.”