“The one thing that can make us come together”

Emanuel Coe, 21, has suffered the deaths of four members of his extended family. He didn't even cry at the last funeral. 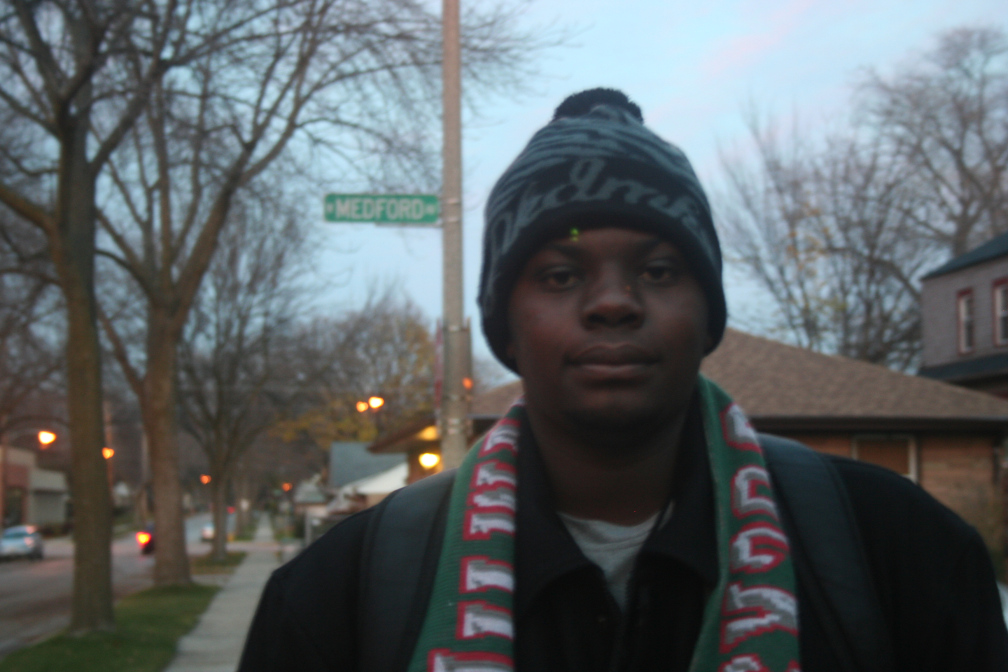 Emanuel Coe on the corner of Ridge and Medford in Grasslyn Manor.

Emanuel Coe bounces a basketball down W. Ridge Ct., headphones in, music loud. His large frame, qualified by kind eyes and a soft-spokenness rare in someone his age, seems, somehow, less imposing.

Coe grew up in the neighborhood and says that it, simply, feels like home. “I loved bein’ around here. I mean, my family’s all around here and…I come from here, so.”

And, for Coe, family is a precious thing.

“I have four sisters – one died of breast cancer,” says the 21-year-old. She died in 2000, when he was still just a boy. “It was kind of daunting, at the time. A lot of stuff happened around then, so, it just was hard dealing with it, you know? But I found a way around it…I grew up.”

Even Coe’s father is gone for good. “I knew my dad. I’ve got some memorable impressions of him…but he didn’t stay in my life too long. Right when I got to high school––last time I saw him was after my freshman year and then he died…so, I didn’t even get to spend a little more time with him. When I heard that he died a lot of deaths had happened already so I was already okay with it, it was just…you know.”

“But, I mean, I had more father figures in my life than I can say. Like, my sister’s father, my second oldest sister, her father was there for me most of his life and around that time when my sister died he died afterwards and my cousin dies.”

Through all the loss, though, Coe says, he was able to find something more than grief. “That day when I was at [my sister’s] funeral I just found myself not crying, like everybody else was. I found myself becoming, somewhat, stronger or going through a change and I didn’t understand it but, now that I’m older, I kind of understand it,” he says.

“It’s like I have to live. So, I mean, you can go at any time…and stuff can change and you have to give everybody your all.”

Knowing this, Coe makes sure he’s there to help his mother – and everybody else – when he’s needed. The rest of the family has his back too.

In fact, Coe, who currently works at Big Lots in Menomonee Falls, is only able to get there because his mother drives him. He’s grateful for the help but, in the end, he wants to be doing something different, eventually.

“I’m kind of like a storyteller,” says Coe, who creates comics with some of his friends. “So I’m able to, like––I wanna flush out a character and bring ‘em to life.”

Where does he see himself, down the road? “Hmm, how do I put it? I know I’ll find myself by then…havin’ a career where my family doesn’t have to worry and I don’t have to worry, you know? Knowing that I can take care of myself and making sure I can…leave the world with something.”