How James Steeno Created His Own Gallery

The watercolor artist displays at art fairs but also has a gallery on Vliet Street.

Successful artists have to be good salespeople as well as creators, and James Steeno clearly loves to meet visitors and to talk to them about his art. He was happy to meet with me at his small gallery at 5700 W. Vliet St. which mostly shows his art, and has very limited hours. In the summer, when Steeno is traveling to art fairs to show his work, you must schedule an appointment to tour the gallery.

Steeno once worked as a graphic designer, but decided to switch full time to working on his art after being laid off in 2009. He creates paintings, watercolors, sketches, paper collages, art and illustrations, but his main interest is in watercolors. “It’s the most environmentally friendly type of paint,” he says.

Steeno opened his gallery about 3 years ago, after nearly 9 years of participating in Art Walks around his neighborhood. The gallery is the window front of the business Appraisals by Schley LLC, where owner Dan Schley works daily in the back portion of the building. This highly visible Arts & Crafts inspired window front space was originally known as the Guerilla Gallery, and Steeno occasionally showed pieces there. That worked so well that Schley asked Steeno to take up permanent residence and call it James Steeno Gallery.

It’s a nice example of area businesses helping each other out and true to the spirit of Local First Milwaukee, the organization which promotes local businesses, and which counts Steeno as a member. He is a big proponent of buying and selling locally. Steeno and businesses in the area work together, he says, because “we feel like we’re in this together and we understand where everyone is coming from.”

James typically works in series of 4 paintings because he likes to package these series as post cards to sell at the art shows he attends, or online at his Etsy shop. He frames the paintings himself, and most of the full sized ones have a smaller version as well. “Smaller is always easier to sell at casual art shows,” James notes.

One of his specialties is works portraying Milwaukee scenery. His newest is what he calls “Milwaukee Beer Garden,” which was modeled after a real life experiment of cutting the tops off of Milwaukee beer cans and planting flowers within them. “I love Milwaukee scenery,” he says. He’s also done watercolors of the Milwaukee Public Library, St. Joan of Arc Chapel on Marquette’s campus, and the Historic Third Ward, all on display in the small gallery space.

Hewing to the local first spirit, James uses a local printing press to print the t-shirts he makes of his paintings. He also has a neighbor, beading artist Julie Paasch-Anderson of Milkweed Designs, who shows her jewelry in a special section of his gallery. “People want what’s close to them,” James says, noting the flourishing of local art. His gallery has also done group exhibits of interesting art-themes and subjects.

James has his studio set up in his house, about ten minutes away from the gallery space, so it’s easy to meet up with clients at the gallery. But he’s also met customers at a park or other places to hand deliver a piece.

He can be very mobile because his paintings only take a few days each to complete, James notes. This also allows him to work on many different projects without getting too tied down to one in particular. Recently he has worked on a series of poppies, and a series that he calls “Naughty Dogs,” which originated when his own dog tore up the sofa in his house.

Summer is his busiest season as salesperson, as he’s on the road nearly every weekend for a different art show. The remainder of his summer schedule is as follows: 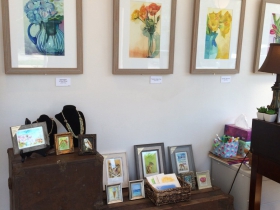 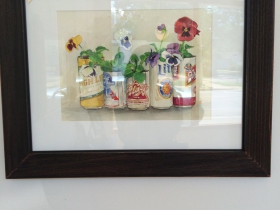 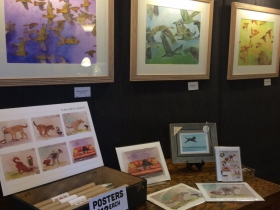 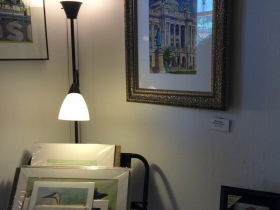 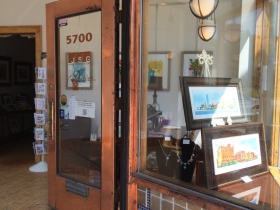 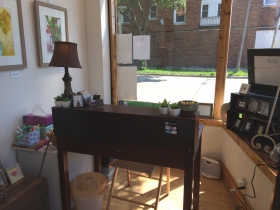 0 thoughts on “Profile: How James Steeno Created His Own Gallery”