City Hall, Milwaukee Rep and Mitchell buildings are sinking. Is Deep Tunnel the culprit? The Times is not sure. 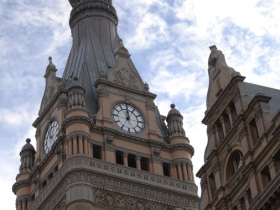 “Questioning the Merits of Propping Up City Hall,” brings national attention to the plight of City Hall, the Milwaukee Repertory Theater and other 19th century buildings here that rest on wood pilings: they are “slowly sinking.”

In the case of city hall, the article contends, many citizens have “mixed feelings” about repairing the foundation, particularly after a “botched face-lift” that is still being corrected.

People love the building, they say, “but in the next breath, the same residents recite a list of social service and infrastructure projects they would rather finance.”

Repairs to the foundation of the building are expected to cost $15 million. The Repertory Theater, located a block to the west of City Hall in an old power plant, has seen its foundation drop by an inch per year since 2011 and has raised most of a $1.75 million goal for repairs.

The article also mentioned the Boston Store as well as the Historic Mitchell Building, whose problems were reported in my March 19th story for Urban Milwaukee. Also in the vicinity is the building at 734 N. 4th St., formerly home to the Milwaukee Journal. As reported, that building was demolished due to a failed wood piling foundation over the winter despite being of ferro-concrete construction.

That story has gone unmentioned by the Journal-Sentinel, despite the structure’s proximity to the others, and the similarity of its foundation and its historic link to the paper.

No structures in Milwaukee rest on solid ground. Manhattan, this is not, in more than one way; all buildings here float on a cushion of clay.

City Hall and the others relied on an ancient technique of resting the foundation upon timber pilings sunk below the water table, where, saturated, they would resist decay for centuries.

However, with the decline in the water table over the last few decades, the tops of the pilings are rotting. To be restored, each must be cut down some feet, topped with a structurally sound steel cap and sealed into place. There are 2,500 wood pilings beneath City Hall, and you can repair only so many (typically one) at a time.

You can’t be too careful with an already shifting load of 41,000 tons of bricks above, not to mention a considerable amount of deadwood weighing down both ends of the second floor.

The Times cites “competing theories” about the cause of groundwater drops. One is historically low water levels in the Great Lakes.

“Another, more contentious, theory is that the groundwater is seeping into a deep underground sewage tunnel that runs beneath the city.”

No kidding. The Deep Tunnel would fill itself twice a year without a drop of rain, due to seepage into it from groundwater, according to US Geological Survey data.

Dennis Barthenheier, the contractor who handled the repairs to the wooden foundation of the Mitchell Building,  blames the unlined portion of the Deep Tunnel for the groundwater seepage. (The tunnel was supposed to be lined with concrete, but the Milwaukee Metropolitan Sewerage District, in a money-saving decision, decided to line only 45 percent of it.) By contrast, MMSD officials have contended there are other causes to the dewatering of Downtown, including seepage into underground wells. They have also pointed to stories reporting some sinking of Downtown buildings prior to the Deep Tunnel’s construction.

Barthenheier sounded a somewhat optimistic note in the Times article, speaking of City Hall: “Buildings like this are salvageable … But it’s not a cheap date.”

The Times asked public works commissioner Ghassan A. Korban to comment on the “extent of City Hall’s problem, or the fix he will recommend” He declined until he presents a full report to officials.

It looks as if the city may have relocate the surprisingly large number of basement-dwelling municipal employees, including the staff of the Legislative Reference Library, and its public collection of noted city documents and impressive reference works, the office of the Historic Preservation Commission, whose head, former House Confidential Honoree Paul Jakubovich is raising  money to open a City Hall Museum in the basement, and some members of the Treasurer’s staff.

Korban would not talk to the Times, but addressed the subject at a city meeting. According to the minutes of a meeting of the Capital Improvements Committee Meeting, April 28th 2014, Korban told the aldermen:

it was too early in the planning to process to know exactly how much staff relocation would be required. Mr. Korban suggested that some funding be provided to design and coordinate the various remodeling projects with the foundation repair projects. Mr. Korban said that subject to approval, the construction on the foundation project could begin in 2015. The committee discussed using the 8th floor of City Hall as surge space during the foundation project. Ald. Bauman suggested no funding be recommended for the City Clerk’s remodeling requests. He said funding could be included if space planning conversations related to the foundation work warranted it.

Back In May, I asked City Clerk Jim Owczarski if the foundation repair plans would force a move of his staff. He admitted via email that this might be a possibility:

“Simplest answer is that we don’t know yet. The basement/foundation project will involve a range of options measuring cost against effect. The Commissioner DPW will present these and the CC/Mayor will be asked to choose among them. There are certainly scenarios in which such a move would be necessary.”

[The reader will note that once again the “8th Floor” of City Hall is invoked as surge space. This requires an explanation: The 8th Floor was in historic times the office and domain of the City Attorney. Early in the Barrett administration, for reasons never explained, the City Attorney was relocated to the Municipal Building under the guise that the old space in City Hall was to be remodeled. The City Attorney has never returned, nor has the space been remodeled.]