Why the Art Museum Addition Must Not Be Built

This could be the biggest architectural mistake Milwaukee has ever made. 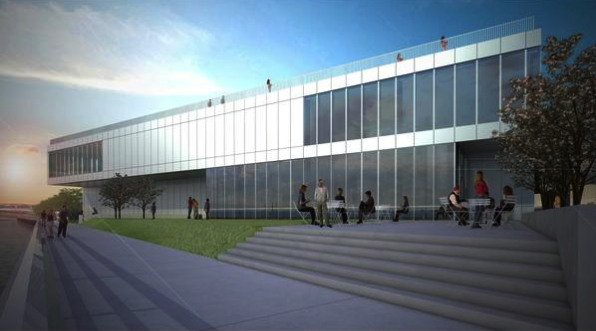 I never write about architects’ renderings because the building inevitably changes. Renderings are really sales tools that leave a lot of important unanswered questions and problems to be solved. Renderings evolve while buildings are final — we have to live with them, and learn from our mistakes.

But sometimes the stakes are too high to wait, as with the proposed addition to the Milwaukee Art Museum. The museum complex is not just a postcard we send out to the world. It’s a place where art and architecture lives today. It’s the focal point and the DNA of Milwaukee’s transition from a 19th to 21st Century city.

Just next door Northwestern Mutual is adding a tower with a million square feet of office space that will be just 32 feet shorter than the tallest building in Wisconsin, the U.S. Bank Center building located across the street. Just east of the U.S. Bank will be two more new neighbors, the 18-story 833 East and 44-story The Couture. And all of this will be interwoven with parks and pedestrian bridges, over a reconfigured Lincoln Memorial Drive, that unites Milwaukee with the art museum and the lake.

The starting point for the museum’s proposed building is the Kahler addition, built in 1975, not the best of times for architecture in America. It’s a big box that unfortunately became a huge pedestal for Eero Saarinen’s War Memorial, thereby grounding a building that used to float sublimely on the horizon off a bluff overlooking Lake Michigan.

It wasn’t until 40 years later, in the late 1990’s when the Calatrava was conceived, that our culture demanded something better. And architects responded, as they do, and started to learn how to build additions to art museums.

The original design by Jim Shields for the proposed museum addition attempted to rectify the excesses and missteps of the building boom that brought us the Calatrava. The Calatrava expansion tragically filled in the cantilevered east face of the Kahler building. Making more room for art turned the under-appreciated and spectacular east face of the of the Kahler building into an ugly stub.

Shields’ design sought to heal that wound and deal with the bulk of the Kahler building by creating a diaphanous cloud with gradated transparent glass. That softened the rectangle and provided a lovely contrast to the density of War Memorial and figurative whimsy of the Calatrava. The new building would be irradiated by the atmospheric conditions of the lake, adding a little zen serenity to the complex.

Still, it was going to be a humble if self assured addition that didn’t compete with either the Saarinen or the Calatrava, or Shields’ resplendent Discovery World Museum just to the south. But the addition, as he conceived it, did rise to the occasion.

The new design for the addition, just released Monday, grew out of Shields’ work, so to speak. But in reality the museum took over the project, and began changing it much as developers might do for a routine condo. You figure out where the granite counters, closets, and home entertainment system go. Then fit it into a box. You design from the inside out, except this is a museum, so you have to do something extra. Ah, reinstall Kahler’s idea and cantilever it like Saarinen’s War Memorial. That’s it, you’re done.

The museum addition will likely be the only new building in this rarified neighborhood that will not have an architect’s name attached to it. Now I don’t want to suggest that an architect’s name assures the building will be great. But having your name on building means someone is responsible. There are consequences. Good architects are embarrassed by their mistakes. But a committee-built building can simply point fingers in every direction.

As some have noted, the new design for the museum bears a striking resemblance to MECCA, the downtown convention center that was reviled and then torn down. It could also be one of those new buildings in the Menomonee River Valley, an above-average industrial park.

Remove the happy foreground from the museum’s rendering and this is what you get. It might be a nice printing factory, international call center, or some other anonymous facility tucked away at the end of cul de sac. Like “nice” people, these sorts of buildings don’t stand out, or stand up for anything.

The proposed addition is a business decision to make something just good enough. But it is not good enough to build on any prominent street in Milwaukee, much less in proximity to the most important architecture in the city. What looks okay on Moreland Road or South 27th Street should not be on the lakefront.

I don’t understand how the Art Museum, which successfully avoided disaster and fought Michael Cudahy’s goofy original plan for the Discovery World, can now turn around and offer up this nonentity with a straight face.

Buildings are an action with a moral dimension because they affect other people. Did the board know what they were doing when they approved this? They are the trustees of this institution, who should be considering how the institution serves this community.

If the board has approved this design, then they should tell us why and not hide behind press release talking points. We will have to live with the building long after the current management goes on to their next jobs, and all the board members have been succeeded by others.

The idea of creating an addition that doesn’t compete or detract from the Saarinen and Calatrava is not a bad one. But this design reduces that theory to the lowest common denominator. This is like putting a shed up in the middle of Paris and then saying you didn’t want to upstage the fine architecture. It is a monumental blunder and cannot, must not be built.

26 thoughts on “In Public: Why the Art Museum Addition Must Not Be Built”