Some Republicans want to end all funding for transit, biking, pedestrian improvements, with huge impact on Wisconsin. 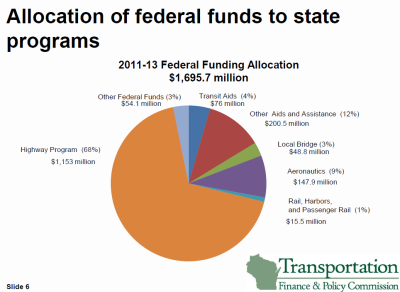 Breakdown of Wisconsin’s federal transportation funds for 2011-13. $76 million in transit funds would be in jeopardy under this proposal. Click image to enlarge.

Senator Mike Lee (R-Utah) and Congressman Tom Graves (R-Georgia) have introduced a bill to eliminate federal involvement in transportation policy, which would spell disaster for funding that supports transit, biking, and walking. A largely symbolic vote in favor of “devolution” will allow Republican members of Congress to demonstrate their conservative bona fides.

The Transportation Empowerment Act (TEA)  is sponsored by 21 lawmakers, all Republicans. The Hill reports that the arch-conservative Heritage Action group will be scoring lawmakers on how they vote. The bill would reduce the federal gas tax from 18.4 cents per gallon to 3.7 cents over five years and turn all spending decisions over to state governments.

Heritage Foundation writer Emily Goff, in her report on TEA, specifically notes that the bill would decimate dedicated funds for transit, biking, and walking projects. Heritage sees that as a big plus:

Under the current highway bill, Moving Ahead for Progress in the 21st Century, at least 25 percent of authorized funding for FY 2013 was diverted to non-general purpose roads and bridges. Transit, the largest diversion, received $8.5 billion, or 17 percent, of authorized funds. Other diversions include $809 million authorized for the transportation alternatives program (TAP), which pays for bicycle and nature paths, sidewalks, and community preservation activities, none of which reduce congestion or improve mobility for the motorists paying for them. 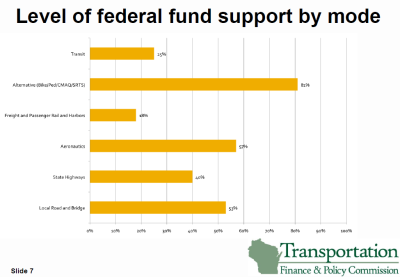 Federal funding by transportation mode in Wisconsin. For example, 81% of bicycle/pedestrian funds spent in Wisconsin come from federal sources. Click image to enlarge.

Heritage remains oddly silent on the massive subsidies that pay for roads. Nor do they seem to notice the enormous, wasteful boondoggles perpetuated routinely by states.

And Heritage doesn’t seem convinced that making transportation systems more efficient in the nation’s economic hubs, lowering the death toll from nearly 34,000 traffic fatalities per year, and reducing dependence on fossil fuels are in the national interest. Your state might not lie along a major freight corridor, but freight bottlenecks and delays cost all of us.

Conservative lawmakers have been trying unsuccessfully to enact devolution since the mid-1990s. But House Transportation Committee Chair Bill Shuster (R-Pennsylvania) has made it his mission to persuade even the most conservative of Republicans that the founding fathers and free-market thinkers including Adam Smith intended a strong federal role in transportation — and he intends to keep it that way.