Most Drivers Don’t Yield to Pedestrians 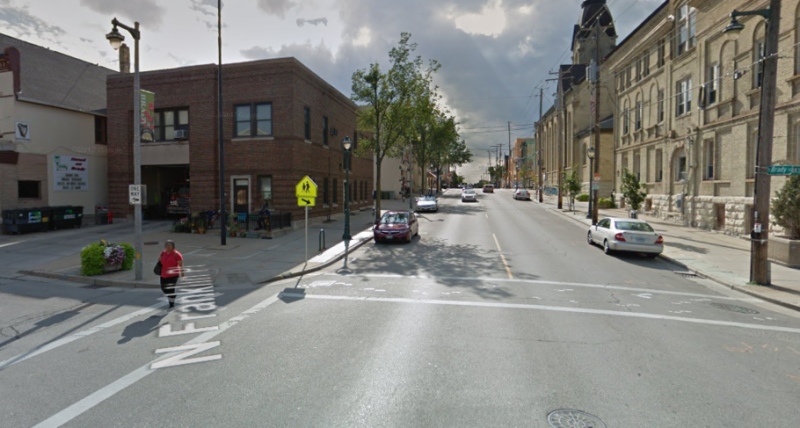 Few motorists yield to pedestrians at crossings like this one at Eeast Brady Street and North Franklin Place in Milwaukee. Image: Google Street View

Scan the typical coverage of pedestrian fatalities, and you’ll see a lot of assumptions about texting “zombies” or kids darting out of nowhere.

Those are the stories you tend to hear when victims can’t tell their side of the story. And they obscure a much more important question: Are drivers behaving safely behind the wheel?

A new study from researchers at the University of Wisconsin-Milwaukee finds that by one critical measure, they’re doing pretty poorly. Only one in six drivers they observed lawfully yielded to pedestrians. But on some streets, drivers were more likely to behave carefully around people on foot.

Professor Robert Schneider and his team tracked behavior at 20 intersections in Milwaukee without traffic lights or stop signs, observing 364 drivers with an opportunity to yield to crossing pedestrians between 5 p.m. and 7 p.m. on weekdays.

Drivers were required by law to stop for people crossing at these locations, but all told, the team recorded proper yielding only 16 percent of the time. They were able to isolate effects on driver behavior linked to speed limits, street design, pedestrian behavior, and the race of the person crossing.

Crossing distances also had a statistically significant effect on yielding. For every reduction in crossing distance of five feet, drivers were 1.1 percent more likely to yield.

The team found that drivers were 2 percent more likely to yield to white pedestrians than black pedestrians. Other researchers in different cities have observed larger racial disparities in driver yielding behavior.

Drivers were also slightly more likely to yield to pedestrians who behaved “assertively,” either by standing in the roadbed before crossing or by raising an arm to signal intent, which the researchers linked to a 1.8 percent increase in yielding behavior.

For street engineers, the implications are clear. The more the street environment — with lower traffic speeds and narrower crossing distances, the more likely drivers will yield to pedestrians.

16 thoughts on “Streetsblog: Most Drivers Don’t Yield to Pedestrians”