Jobs Up Yet Driving Down in Seattle

Has added 60,000 downtown jobs, yet solo commuters declined 9%. Can Milwaukee learn from this? 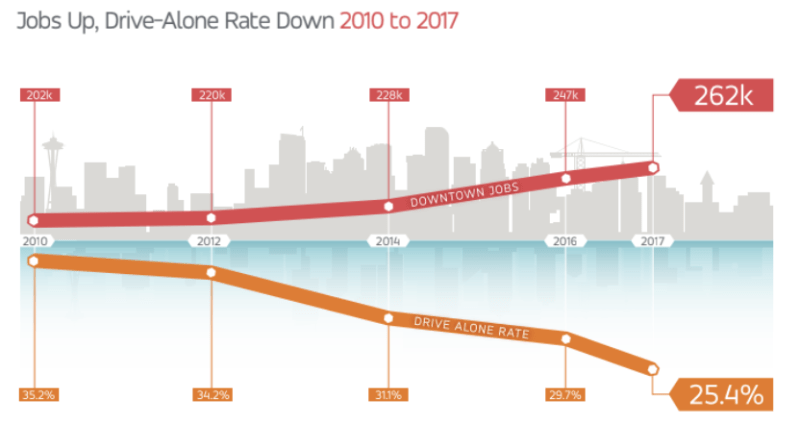 From 2010 to 2017, downtown Seattle added 60,000 jobs. Over the same time period, the number of solo car commuters into the city’s central business district dropped by 4,500, or 9 percent, according to a new report from Commute Seattle.

The city was able to absorb the employment boom without setting off a traffic explosion thanks mainly to a dramatic increase in transit ridership.

The number of transit commuters getting to work downtown has increased by 41,500 in the last seven years, a 48 percent increase. About half of all trips into downtown Seattle at rush hour are now made by bus or rail. Solo drivers account for just a quarter of downtown commuters. 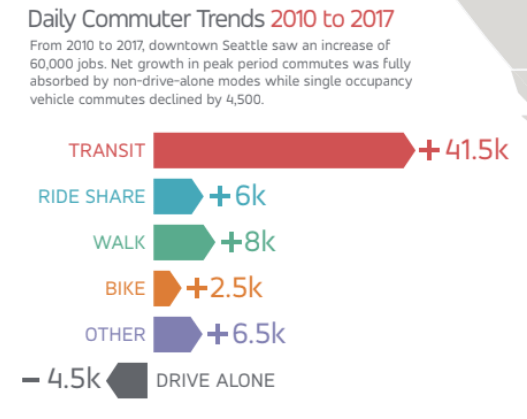 Seattle’s remarkable performance was driven by major investments in transit. Since 2014, Seattle and King County have increased overall transit service 13 percent, fueled by strong support at the ballot box.

With three new Link light rail stations — including two that connect the University of Washington to downtown — the system is carrying 35,000 additional weekday trips since 2015, nearly doubling ridership. Those expansions were part of transit funding packages voters approved in 1996 and 2008.

By contrast, transit has greatly declined in Milwaukee: The Milwaukee County Transit System has seen ridership decline from more than 62 million in 2000 to about 40 million in 2016. During Scott Walker‘s years as Milwaukee County Executive funding for the system was regularly cut, as were a number routes, and fares rose significantly.

In 2014 Seattle voters approved a 0.1 percent sales tax hike and higher vehicle registration fees to add bus service within the city. As the city has added light rail service, it has systematically evaluated and adjusted its bus network to complement those changes. As a result, the share of Seattle residents living near frequent transit increased from about 25 percent in 2015 to 64 percent in 2017.

“People wanted more bus and light rail options, and we delivered,” said King County Executive Dow Constantine in a press release. “More service means more riders, and we will continue to make improvements to make it even easier to get downtown, and across the region.”

Recently, Milwaukee County Executive Chris Abele proposed an increase in the county wheel tax (vehicle registration fee) to $60 from $30 to help fund transit, but the Milwaukee County Board, led by board chair Theo Lipscomb, rejected the proposal due to strong opposition by residents who overwhelmingly voted against the increased wheel tax in a 2017 advisory referendum. The higher registration fee would have supplied an additional $15.6 million to the county’s budget this year. A cut in nine additional bus routes looked likely after the failure to raise additional funding, but an unexpected surplus of $481,000 generated by the existing registration fee held off those route cuts for now.

In 2016, voters in the Seattle region approved a 25-year transit funding package, which will add key connections in the city and roughly double the size of the rapid transit network.

Commute Seattle based its report on a survey of 1,784 downtown employees from randomly selected workplaces. Commute Seattle is a quasi-government organization that helps administer programs encouraging downtown workers to get around without private cars. It is supported by the city of Seattle, King County Metro, Sound Transit, and the Downtown Seattle Association.

5 thoughts on “Streetsblog: Jobs Up Yet Driving Down in Seattle”