It’s been another year of ridership growth for Amtrak, despite the difficulties caused by Hurricane Sandy in the Northeast. In fiscal year 2013, the nation’s intercity rail service saw its 10th ridership increase in 11 years, carrying a record 31.6 million passengers [PDF]. 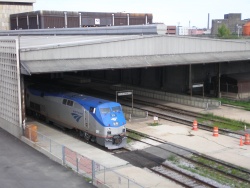 Although the Hiawatha saw a slight decline in ridership during the 2013 fiscal year, ridership had increased 132 percent between 1997 and 2012.

The Northeast Corridor still accounts for a huge share of Amtrak’s total ridership, with 11.4 million trips, but the ridership on that segment was down slightly from the previous year. The major growth was in routes serving smaller cities.

Ridership was up 4 percent in Michigan, where construction to improve the speed of connections between Detroit and Chicago is entering the final phases. St. Louis to Chicago boardings were up 9.7 percent, indicating riders are responding to new investments in that line as well. One segment of track was recently upgraded from 79 mph to 110 mph service, and by the end of 2015 up to 75 percent of the route will receive similar improvements, shaving an hour off the trip between the two cities.

Meanwhile, the Pennsylvanian, serving Pittsburgh, Harrisburg and Philadelphia, saw a 3.3 percent ridership jump. And service in the San Joaquin Valley saw 6.6 percent more passengers. (Ridership for the Chicago to Milwaukee Hiawatha line decreased slightly in this period but has doubled over the last decade, prompting Gov. Scott Walker and the state Department of Transportation to support adding more trains to the line.)

News of the ridership high coincided with the release of a new poll of eight midwestern Congressional districts, showing support for Amtrak is much stronger than beltway political squabbles would indicate. DFM Research of St. Paul, Minnesota, interviewed 3,000 randomly selected residents of Illinois, Indiana, Missouri, Colorado, Kansas, and Iowa about their opinions on federal spending for the nation’s intercity passenger rail service, in a survey commissioned by SMART, a member union of the AFL-CIO’s Transportation Trades Department.

By more than a four-to-one margin, respondents said they support maintaining or increasing current federal spending levels to support Amtrak. Only about 17 percent of those interviewed supported eliminating funding for the service. Even 60 percent of self-identified Republicans said they supported maintaining or increasing funding compared to just 32 percent who preferred eliminating federal subsidies.

The survey and ridership data come as partisan gridlock and the government shutdown was threatening to bring Amtrak service to a halt.