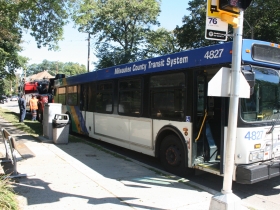 An old MCTS bus being towed away following a break down.

The state of Wisconsin imprisons a higher proportion of black men than any other state. Almost 13 percent of the state’s African American men are behind bars — nearly twice the national average. In Milwaukee County, according to a recent report from the University of Wisconsin-Milwaukee Employment & Training Institute [PDF], more than half of black men in their thirties have served time in state prison.

UW-Milwaukee’s John Pawasarat and Lois Quinn recently explored this problem as an aspect of the major workforce challenges facing the state. One of their key findings was that for black working-age men in the Milwaukee area, transportation barriers are a major obstacle to employment, restricting their prospects.

Among African Americans living in Milwaukee, 47 percent do not have a driver’s license, and the unemployment rate is 24 percent.

“Two-thirds of the county’s incarcerated African American men came from six zip codes in the poorest neighborhoods of Milwaukee,” Pawasarat and Quinn write. “Most ex-offenders return from prison into inner city neighborhoods that have extremely large gaps (i.e., 25 to 1 in May 2009) between the number of active job seekers compared to available full-time work.”

Black men would have more employment options if jobs were accessible by transit. But that tends not to be the case, Quinn told BBC reporters.

“When we do job surveys, we find that three-fourths of the jobs that are available are outside the bus lines,” she said.

Buses and rail have fared poorly under Scott Walker, who saw Milwaukee transit service deteriorate on his watch as county executive and managed to kill passenger rail service to Madison before even taking office as governor in 2010. Since then, Walker has presided over a 10 percent cut to the state’s transit budget. Milwaukee has been able to avoid dramatic bus service cuts so far, thanks to one-off budget maneuvers, but a $7 million deficit looms in 2014 [PDF]. One estimate from Joel Rast at UW-Milwaukee’s Center for Economic Development warned that Milwaukee bus cuts prompted by Walker’s decision to slash transit funding would eliminate access to more than 13,000 jobs for city residents.

For many, driving to work is not a viable option. Pawasarat and Quinn’s research shows that only about 10 percent of black men with incarceration records in the state had a current, valid drivers license with no recent suspensions or revocations.

“If there was a job here where I could get on the bus to support my family, I would take it,” Brian Osei, a participant in a jobs program for ex-offenders, told the BBC. “There’s nothing here. I have to take this risk [driving under suspension] to drive.”