The Space is the Place

How the owners of Comet, Hi Hat and Bel Air Cantina have changed the city.

The Comet. Photo by Tom Bamberger.

Scott Johnson and Leslie Montemurro got their start with Fuel Cafe, a funky coffee shop on Center Street which opened in the early 1990s and was so successful it became a key part of the eventual redevelopment of Riverwest. They went on to open many other places, from the Comet on Farwell Avenue to the Hi Hat Lounge and its adjacent bar, The Garage, which buzz like a little city within a city on Brady Street. Just across the street they own another restaurant, Balzac. Then there’s Palomino and Honey Pie in Bay View, both very successful, and Bel Air Cantina on Humboldt Ave., which is so popular that Scott and Leslie bought the bar across the street to manage the overflow.  And now they’ve opened a Bel Air Cantina on 68th and North Avenue, in Wauwatosa (the first time they’ve ever repeated a name).

Their success has not gone unnoticed by banks and developers who line up to pitch them with distressed properties and development ideas. Their places have had a huge impact on the city, consistently becoming the economic and spiritual anchor of the neighborhood.

Yet each establishment is so distinctive it seems like a happy accident. Most people are unaware all these place have the same owners. And no one has been able to figure out, much less copy how they do it.

The last time I stopped at the The Comet on Farwell it was packed at 3:00 in the afternoon. It’s split right down the middle, a diner to your right and corner bar to the left — two American icons tied together by a U-shaped counter. An elegant wood canopy with modernist inset lighting is offset by large photographic murals that add a welcome ambiguity to all the meanings swimming around the place. None of this makes sense but the moving parts fit together like a hit pop song.

Scott and Leslie started out taking advantage of the character of older buildings. (At Honey Pie, Hi Hat and Fuel Cafe, for example). They had predecessors in this respect. Alterra got its start and style from an early 20th century building on Prospect. Elsa’s is perhaps the longest running and best example of this phenomenon.

This trend has been so successful it brings up an interesting question — when was the last time a new building in Milwaukee was designed and built for just a restaurant? I can’t think of any recent examples except fast food franchises. (Alterra comes to mind, but their new buildings are mixed use.)

It seems incredible that architecture couldn’t give a restaurant a distinctive form for decades in Milwaukee. Was it a lack of nerve or imagination? Then architect Scott Kindness designed such a place on Humboldt Ave. around 2005 as an adjunct of the larger real estate project. The building, which opened as the Good Life restaurant, floats on the lighthearted whimsy of a simple wave with glassy garage doors opening up to the street. 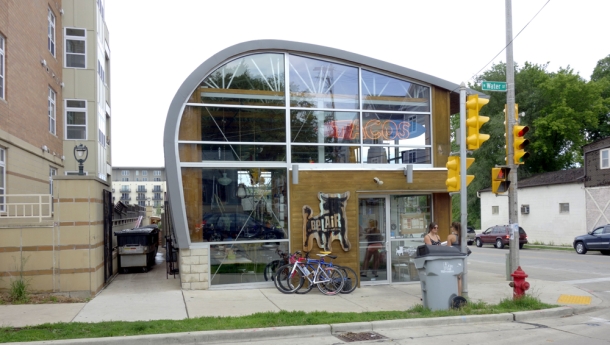 One of the finest new small Modernist buildings in Milwaukee was an afterthought. The Good Life, however, had the bad luck of the prolonged bridge construction next door. Then Scott and Leslie got a hold of it and it’s bursting with life.

The new Bel Air Cantina in Wauwatosa, designed by Chris Socha and Joel Krueger of City Place Studio, exports Scott and Leslie’s urban style to the eastern, most city-like part of Wauwatosa. It’s their newest and most ambitious project. No one knows what to do with the thousands of defunct Modern buildings which usually cycle through a downward spiral until a developer comes along and scrapes the site clean. This building was Tosa Imports, a small-car dealership, and then an aquarium store at the end of a road from another age. 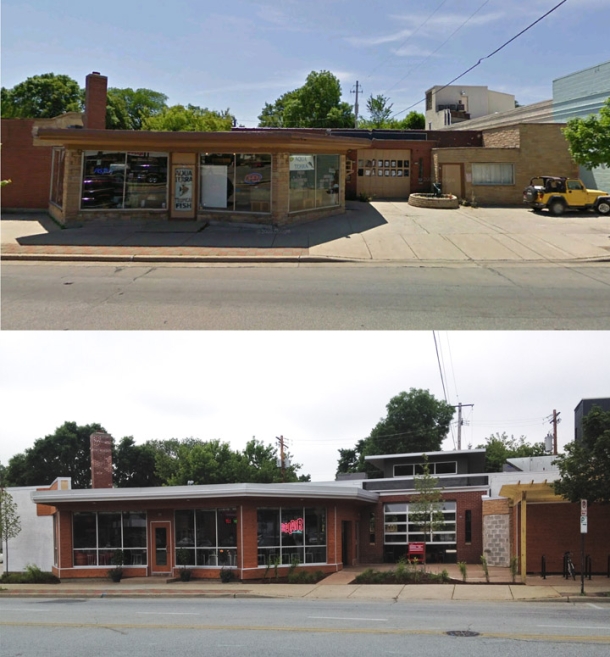 This crumpled building wasn’t just freshened up. The exterior was elegantly upgraded, emphasizing the hidden virtues of the original building. Its shape, proportions, transparency, and proud use of plain industrial materials are the ingredients that made America new after World War II. The courtyard, minimalist plantings, and covered bike rack add a zen-like calm. 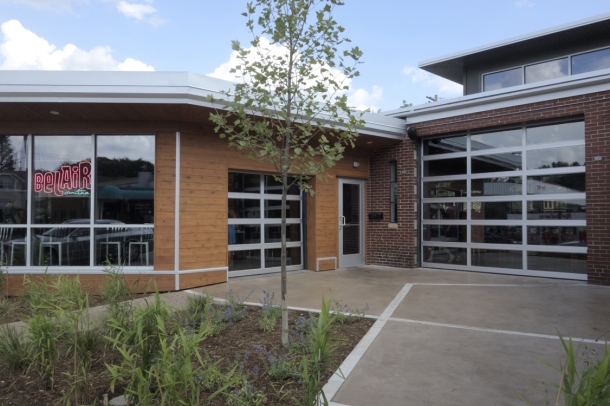 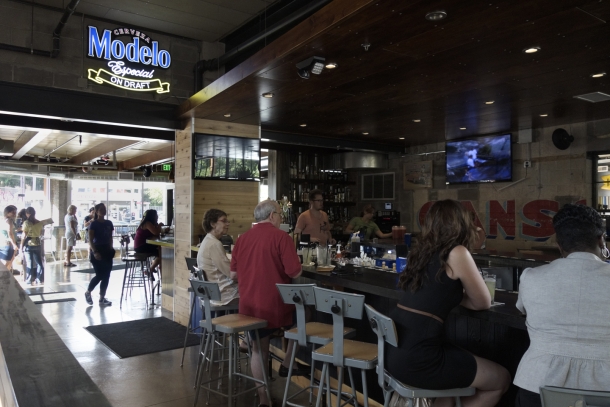 It’s worth remembering, before boring atriums were added to malls, that Modernists were particularly good at creating expansive horizontal spaces. Inside, Bel Air rambles like an old-fashioned ranch house filled with air and light.  Views dissolve into luminous windows. Horizon lines make the space seem unbounded yet it’s cozy and intimate.

These pictures, by the way, were taken at 5:00 on a Wednesday afternoon. How do Scott and Leslie do it, how do they turn every place into such a success? It’s not the food, which is good and hearty but never wanders into the foodie fetish country. Nor are their restaurants places to be seen. There is no formula or style. Their places aren’t classy, trendy, fashionable or anything in particular except people love them.

Scott Johnson, who is physical plant side of the duo, has a knack for making and finding chairs, tables, and fixtures that work together. The relationships are fun, lighthearted. But there is a creative process at work. Not the kind based on postmodern thought, or whatever art-world folks talk about these days. His art involves an intelligent color palette and an insight into how materials and finishes resonate with each other. The interior is a breezy collage of refinement and funk. 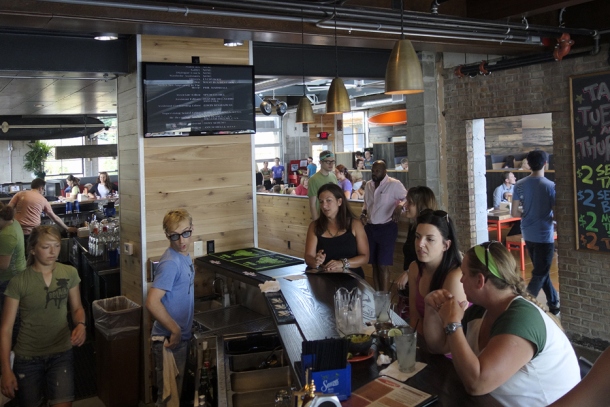 Johnson loves the stuff that fills his restaurants, which I think gives his places their lived-in feel. And he knows when to stop. The space is the place. Different elevations, rhythms, and graceful sight-lines unfold in layers. It’s the same visual game that Frederick Law Olmsted played in Central Park. You can see it in this picture. The people fit right in. 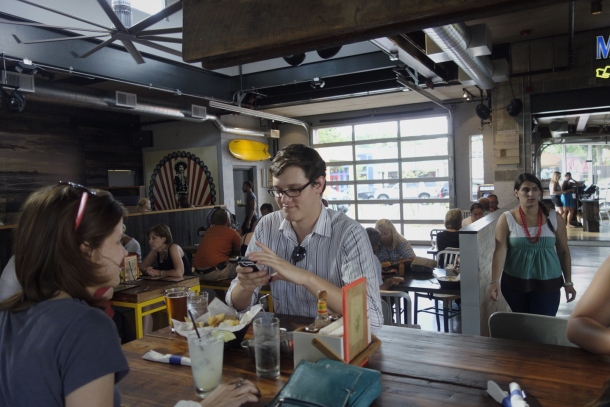 The people fit right in. Photo by Tom Bamberger.

Each of Scott and Leslie’s projects have a familial relationship to each other, they are created from the same process and values. Yet they go their own way. Their restaurants are individuals, go by their own names, like we do. Somewhere along the line the duo made the fateful decision, against all odds and trends, not to become a brand that is simply repeated, diluting the uniqueness of every space it occupies.

There’s something creepy about brand awareness, of being constantly reminded a corporation is your friend. You can’t mass produce and franchise an emotional attachment to a place where you enjoy having a drink and a taco. Scott and Leslie are selling character — the ethos and authenticity you find in cities — a kind of magnetic field that makes people want to linger and enjoy the passing scene.

9 thoughts on “In Public: The Space is the Place”