The West Side restaurant’s an oasis in a food desert, and also helps fund a veterans training program. 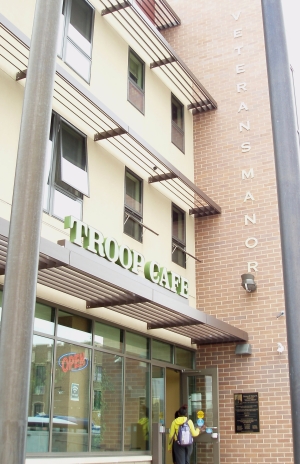 Troop Café is on the first floor of Veterans Manor, at 3430 W. Wisconsin Ave. Photo by Peggy Schulz.

It was Father Warren Sazama, president of Marquette University High School, who suggested creating a place where Marquette students and staff could get a quality meal.  The neighborhood surrounding the school is nearly a food desert, with the only “dining” choices being convenience stores and one hot dog shop on 35th St.  The closest fast food restaurant, if you call that dining, is on 25th and Wisconsin Ave.

Sazama suggested the idea to Dawn Nuoffer, executive vice president, and Robert Cocroft, president and CEO of the Center for Veterans Issues, who were seeking neighborhood input and support for the development of Veterans Manor on 35th and Wisconsin Ave. Sazama’s idea led to the creation of Troop Café, a new restaurant on the first floor of Veterans Manor. As Nuoffer puts it, the café “started with a request and a dream.”

The dream was to use the cafe as a way to help veterans.  If they were going to be employing people,  Nuoffer thought, “why not make an even bigger impact and use it as a program to train homeless and unemployed U.S. veterans, while delivering an amazing quality product.”  Troop Café operates as a not-for-profit, social enterprise program of the Center for Veterans Issues.  All earnings are funneled back into the café to fund its current operation and future growth. 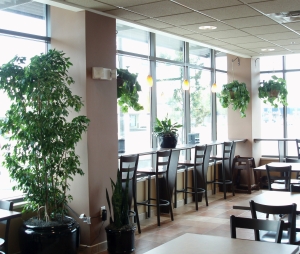 Troop Café is a relaxing place to be, with its warm earth tones, wood accents and plenty of greenery. Photo by Peggy Schulz.

The Build-Your-Own Breakfast is a popular feature already, even though the café’s “soft opening” was just May 2; a grand opening celebration is still in the planning stages.  For lunch, choose from a list of cleverly-named hot sandwiches (the B52 Meatball Bomber or the Cuban Pickle Crisis) and tortilla wraps, including the Troop Dog and the Veggie Alamo wrap.  Yes, there’s plenty of military lingo; you can order the Chow Hall Special or the 2nd Lieutenant at breakfast, or maybe a Sloppy G.I. Joe or Beach Landing Club at lunch.

Salads are freshly chopped and soups are made in-house. Greg Bautista, Troop Café’s head chef, reports that more than 1,000 samples of his delicious Cream of Cheddar Bratwurst soup were given away at the Stein & Dine festival in late April, helping spread the news about the new café.

Bautista previously served as food operations director at the Milwaukee Center for Independence, where he served as food operations director.  The Center leases kitchen space elsewhere in Veterans Manor, preparing 4,000 meals per day for its own programs. That’s how Bautista learned about the formation of Troop Café.  He served as a consultant, helping to develop the restaurant, but soon, he says, “I fell in love with the whole concept and the mission,” and took the job as head chef. 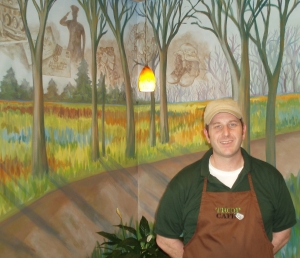 Many of the baked goods available on a rotating basis are made at Troop Café, including pastries, cakes and cookies.  A well-stocked drink cooler also offers a variety of beverage options.  Items in the ready-to-go area, not listed on the printed menu, are rotated, “to keep things interesting,” according to Chris Kadrich, Troop Café’s general manager.  A Marine Corps veteran, Kadrich was working as a waiter at Sake Tumi, the Japanese/Korean restaurant, when he met some of the staff from the Center for Veterans Issues.  He’s been involved with Troop Café since August of last year.

Kadrich, in fact, penned Troop Café’s mission statement, which says, in part: “offering affordable, high quality meals to the public, while providing job skills training for military veterans with barriers to employment.”  In short, as an artwork at the café proclaims:  “Feed your hunger, fuel the mission.” 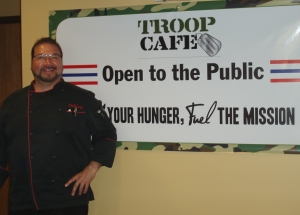 Troop Café is the first of its kind in the nation, Nuoffer says, run and operated by veterans who seek credentialing in the food service and hospitality industries.  After the training period, employees will be ready to take the Wisconsin SafeServ certification exam and will then be placed in full-time positions with employer partners in the community.

Besides the help received from the Center for Independence, Nuoffer says her team has also gotten support from Harley-Davidson and the Helen Bader, Forest County Potawatomi, Bradley and Greater Milwaukee foundations.

Speaking of missions, Kadrich, the general manager, points out that Troop Café serves Stone Creek Coffee and Rishi Tea, both locally-based companies with goals similar to those of the café:  Doing right by the world. Though the café’s mission may not even occur to you as you’re relaxing over a mug of Rishi Tea or a mixed berry shake.