How the Moderne Lost Some of its Swagger

Value engineering made it stouter, but it’s still minor miracle a building this good was created. 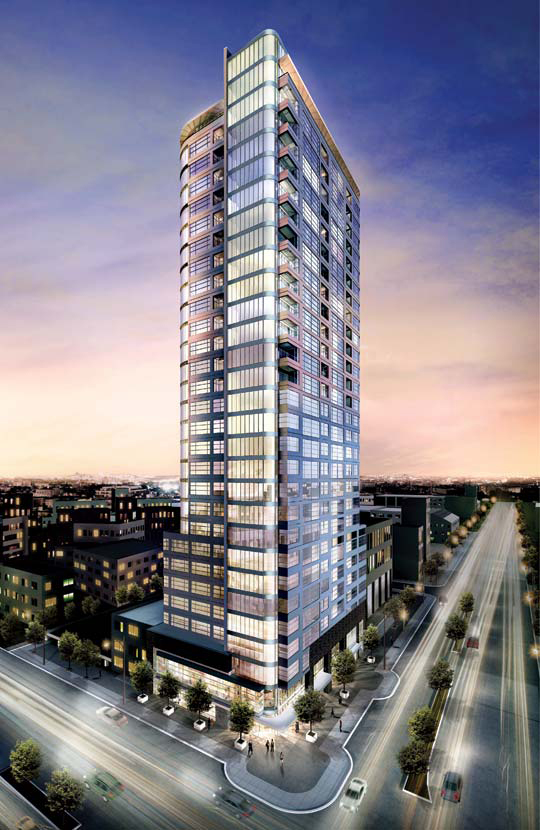 This early conception of The Moderne lived up to its name. Like its predecessors, Art Deco and Art Nouveau, Moderne design exuded taste and refinement. Think of James Bond entering a room in a well-tailored suit: The Moderne started out sleek. Its 30 floors, high ceilings, wrap-around windows, and graceful curves were poised to soar into the Milwaukee skyline. 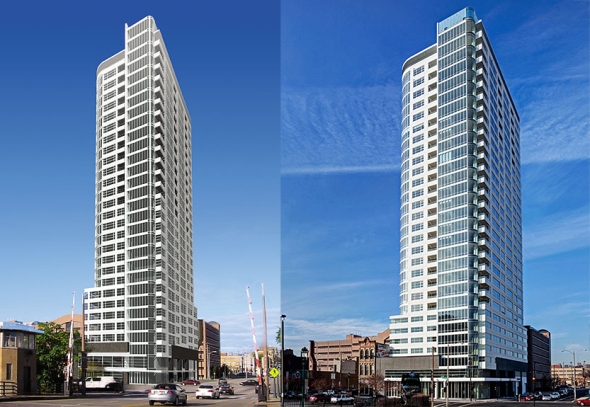 This more mature rendering of The Moderne at 1141 North Third Old World Street (on the left), was the template for what was built.  Like a well conditioned body on the beach, tall buildings need to be in shape to stand up and command our attention.

You may notice the finished building from the Moderne’s website (on the right) looks a little stouter than the last rendering.   Sleekness does not figure into profitability because buildings are sold by the square rather than cubic foot. The Moderne’s developers shaved 5 percent off the top to fit the building into the budget, according to the architect Matt Rinka. 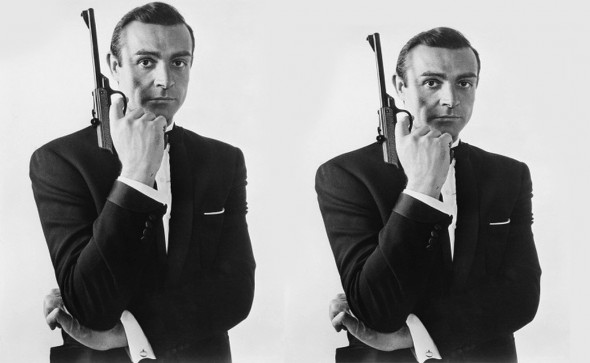 Tall buildings are like cattle, they get fattened up for the market. That 5 percent difference in height is not as small as it sounds. Here is James Bond, “value engineered” roughly proportional to the Moderne. You can still pick Sean Connery out of a lineup, but he wouldn’t get the part.  All the James Bonds are over six feet.

But a little shrinkage doesn’t explain why the building looks more ordinary in the snapshot on the right.  Professional photographers are paid to shine the best possible light on their subject. The “best” photograph of anything is always too good to be true.  An “iconic” photograph is supposed to stick in our mind and delete less desirable views of a subject, such as these of the Moderne. 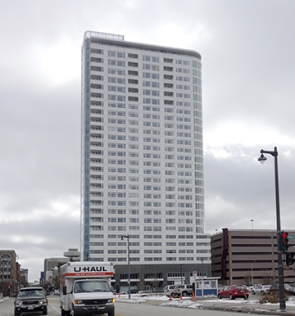 The Moderne flattens out from the west. 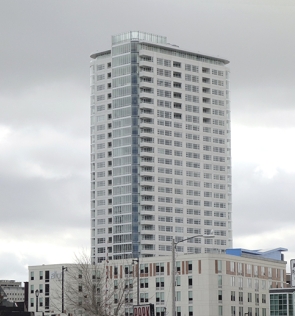 It wasn’t that long ago that when the skyline was a sacred space, and buildings looked better than their pictures from all four sides.  The Ulm Minster in Germany, which broke ground in 1377,  was the tallest structure in the world when it reached its adult height of 530 feet in 1891. The Washington Monument, at 555 feet, was the first secular structure to top church spires in 1877. Then the Eiffel Tower soared to 989 feet in 1897. (Our City Hall at 354 feet briefly held the title of the tallest secular building between 1895 and 1899.)

Monuments to modernity, like the Chrysler, Empire State, and Sears buildings dominated the skies of the 20th century. When King Kong climbed the Empire State Building in 1933, 1976 and 2005, he wasn’t just blocking somebody’s view — skyscrapers were America’s greatest public art.

It wasn’t until the 21st Century that a residential building exceeded the height of the Eiffel Tower on the planet earth. We looked up to towers until their biggest selling point became looking down on us. The trend is unmistakable. For the last few decades residential towers have reshaped the skyline in Milwaukee. While the towers of old were about creating powerful religious, civic or commercial symbols, the residential ones show what people are willing to pay to live above the rest of us.

At their worst, these high-rises are just a stack of units, a housing development with porches and granite countertops.  The market produces a void when a building depends on only what the residents value.

Unlike so many residential towers in Milwaukee, the Moderne tried to fill this void. It’s a miracle anything as good as The Moderne was built, with HUD money no less. No one expected this much architecture in the middle of the worst real estate economy since the Great Depression.   Its apartments start at less than $1,500 a month and set a new standard for a room with a view in Milwaukee.

So it’s fitting the Moderne’s architect/developer team, Matt Rinka and Rick Barrett, landed an even bigger project — a 44 story centerpiece to the Lake Front Redevelopment plan overlooking the lake at the end of Wisconsin Avenue.  Let’s hope The Couture will not live up to its name —  a tall closet for fancy people.

This majestic site demands more than what the housing market will bear. The Couture is being built on public land. It’s our land, our city, our view.  We should set our sights higher. Build something we all can look up to.

14 thoughts on “In Public: How the Moderne Lost Some of its Swagger”