Why WisDOT Is Behind the Times

Auto traffic per capita has declined since 2004, other states now spend less on highways, but Wisconsin wants to keep expanding. 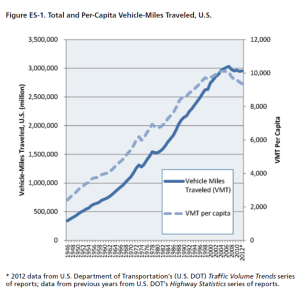 America’s love affair with driving hit a road block in 2004.  That’s when our long driving boom peaked, according to the new report, “A New Direction,” by The Wisconsin Public Interest Research Group. The report shows that for decades before 2004 the country saw a steady increase in vehicle miles traveled per capita, but ever since 2004 the trend has been in decline.  In fact, vehicle miles per capita has now dropped down to 1996 levels. That’s right folks, forget the SUV and find the keys to the Caravan, because we’re driving like it’s the mid-1990s.

In fact, this decline in driving had a huge impact on the state’s budget process, generating a $54 million budget shortfall in the transportation fund. A report from the Legislative Fiscal Bureau predicts that “motor vehicle fuel tax revenues are estimated to be $42.5 million lower in 2013-14 and $42.8 million lower in 2014-15,” than had been projected in Gov. Scott Walker‘s budget proposal.  The response to this by the Joint Finance Committee was simply to delay a handful of highway projects and cut local aid, but the state’s policymakers might want to look a little deeper and consider why fuel revenues are down: it’s because people are driving less. They might want to take that into account when deciding how much highway expansion is actually needed.

Some experts thought this decline in driving was something like a midlife crisis and predicted that when the recession ended we’d all get back to our freedom loving ways and would be trading our bus pass in for a shiny new Explorer. But here’s the thing, not only did the decline begin well before the recession, but it has continued since the recession’s official ending in June 2009.

Brian Merchant, writing at Vice, credits the decline of car culture on the “twin killers,” of “Facebook and Brooklyn.” The idea is that the Millennials (Generation Y), those born between 1983 and 2000, find social media and urbanity more appealing than auto oriented freedom. This view of Millennials finding new freedom is backed up by findings in the WisPIRG report: “Millennials are more likely to want to live in urban and walkable neighborhoods and are more open to non-driving forms of transportation than older Americans. They are also the first generation to fully embrace mobile Internet-connected technologies, which are rapidly spawning new transportation options and shifting the way young Americans relate to one another, creating new avenues for living connected, vibrant lives that are less reliant on driving.”

Also of note, the report found that “Americans took nearly 10 percent more trips via public transportation in 2011 than we did in 2005.”

So what is the Wisconsin Department of Transportation’s response to such data? 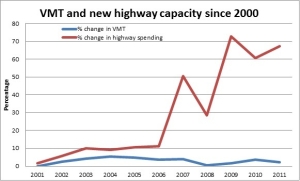 While vehicle miles traveled has changed little or even declined while highway spending is on the rise in Wisconsin. Click the graph for expanded view. Source: 1,000 Friends of Wisconsin.

It continues to forecast increases in driving in order to show the “need’ to expand freeways, such as the proposed double-decking of  I-94. In fact the WisPIRG study found that “Wisconsin ranked 11th among the 50 states in the percentage of funds it is committing to new road capacity.” This is one ranking Wisconsin shouldn’t be proud of, as it shows that our government is ignoring the generational trend, is out of line with the rest of the country, and will continue to over-spend on highway expansion.

Angie Schmitt, in a story for Streetsblog, reports that “WisPIRG examined seven major highway projects undertaken by the state of Wisconsin over the last two decades at a public cost of more than $1 billion. The group found that WisDOT consistently overstated the case for expanding highways.” The study spans more than 20 years, showing that even in the years before the generational shift started, WisDOT has overstated likely increases in traffic to justify highway expansions.

These knee-jerk overestimates don’t particularly surprise me, as during the debate over adding a bike lane to the Hoan Bridge I noted that WisDOT’s projections stacked the deck in favor of auto traffic at the expense of bikes, which helped defeat the bike lane proposal.

Despite the continuing decline in driving both nationally and here in Wisconsin the push for expansion marches on as the State of Wisconsin is poised to spend billions on new and bigger highways. Given the racial tinge to the dispute over the Zoo Interchange expansion, WisDOT’s approach looks in more ways than one like a policy straight out of the 1950’s.

8 thoughts on “Car Culture: Why WisDOT Is Behind the Times”