Rising 40 feet high, it could be destructive to the Story Hill neighborhood.

By Gretchen Schuldt, Wisconsin Justice Initiative - Mar 5th, 2013 09:06 am
Get a daily rundown of the top stories on Urban Milwaukee 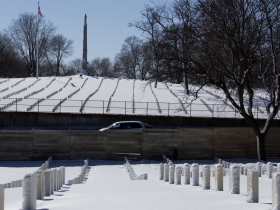 Location of the proposed double-deck freeway. Photo by Gretchen Schuldt.

The East-West I-94 freeway in the area near Miller Park could be rebuilt into a 40-foot-high, double-decker freeway, according to officials with the Wisconsin Department of Transportation. The expanded freeway would extend from the Story Hill neighborhood to west of Hawley Rd, WisDOT officials told Story Hill residents last week.

WisDOT insists that no final decisions have been made and that everything from the number of lanes (either six or eight) to the way the double-decker would be built is still under study, but residents and elected officials attending the Story Hill Neighborhood Association meeting clearly were not convinced.

“The political decision will be to sacrifice this neighborhood for the commuters,” predicted Ald. Michael J. Murphy, who both represents and lives in Story Hill.

“I think you have to have a healthy skepticism of the DOT,” said State Sen. Tim Carpenter (D-Milwaukee), who represents the area.

WisDOT is making plans to rebuild East-West I-94 from 70th St. to 25th St. Right now state law prohibits adding lanes adjacent to Wood National Cemetery, which the freeway cuts through. Gov. Scott Walker is proposing in his budget to repeal that ban. 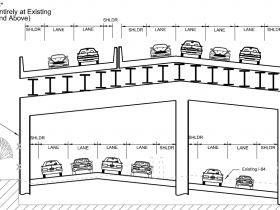 All Up Design – Build New Freeway Entirely at Existing Ground Level and Above.

“One thing to note is that it will cost more to build the freeway lower,” WisDOT says on the site. “The higher you go the less expensive the solution.”

Murphy, at the meeting, predicted WisDOT would reject the latter two options. “You’re not going to do it because of the money,” he said.

The neighborhood association already has gone on record with its views on an expanded freeway. “We are adamantly opposed to any double decking of lanes where the top level/deck is built up in the air,” the association wrote in a letter to WisDOT. “Building any freeway lanes from 10-40 feet above grade would add to the air, noise and light pollution in our neighborhood, and would literally route freeway traffic into front yards and living rooms of home owners on Story Parkway.” 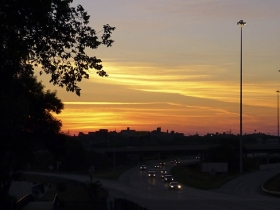 A morning view of downtown from Story Hill. Photo by Gretchen Schuldt.

WisDOT project manager David Nguyen told residents that sound impacts of the reconstructed freeway could result in the construction of sound walls along the top of the bluff that separates the neighborhood from the freeway. That would block Story Hill’s views of downtown, Miller Park, the VA and sunrises that exist now.  It also could mean the end to the natural area atop the bluff that serves to deaden some of the freeway noise.

Residents clearly were dissatisfied with WisDOT’s proposals and are worried about the potential impact on their property values and their quality of life. 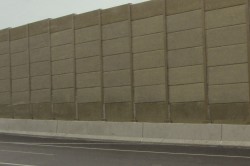 Sound wall along a north-south segment of I-94. Photo by Gretchen Schuldt.

“I’m really angry,” said one. “I have a vested interest.”

At the end of the meeting, Story Hill resident Steve Brachman asked the WisDOT representatives to cite one positive impact the proposed freeway project would have on the neighborhood.

They had none to suggest.

Gretchen Schuldt is a Story Hill resident and opposes the proposed expansion. 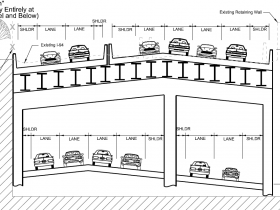 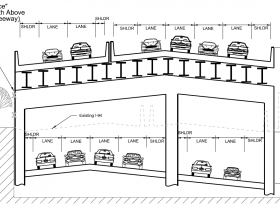 51 thoughts on “Double-Decker Freeway For Milwaukee?”