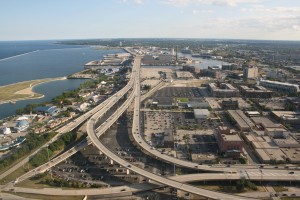 The Hoan Bridge as seen from the US Bank Center top floor.

Last week, the Wisconsin Department of Transportation (WisDOT) gave a presentation regarding the possibility of adding a bike trail on the Hoan Bridge.  The DOT laid out five potential alternatives, that covered a wide range of costs, and potential impacts such as traffic congestion.

The cheapest option, the $9.4 million version known as Alternative 1A, was clearly the concept on the minds of supporters, because it was the most affordable and realistic of the designs.  But the WisDOT report gave this option a ‘level of service’ rating (LOS) of F, likely ruling it out as a viable option in the eyes of WisDOT.   When WisDOT talks ‘level of service’ they are determining the level of traffic congestion, which is measured by the density of traffic and traffic flow, or speed.  I’m not a traffic engineer, but this ‘level of service’ determination by WisDOT seemed to come to an odd conclusion, and was made using flawed, and even conflicting, assumptions.

In this case, the level of service F grade, as a result of the trail’s construction and lane removal, is predicted to occur in 25 years, for one hour a day, and will result in traffic speeds dropping.  According to the report, today normal traffic operation on the bridge is actually speeding.  In 25 years?  For one hour a day, speeds are projected to drop to 47 mph on the bridge segment while still allowing speeds of up to 54 mph on the ramps.  In fact, the two-lane design will still allow for people to speed across the entire bridge during the vast majority of the day, and on the ramps during rush hour.  Certainly designing any road for speeding should get an F rating, but that’s not the argument here, as WisDOT rates this an F because they assume a free flowing traffic speed of 60 MPH. Their assumption is that driving 10 mph over the speed limit is the ideal operational state for the bridge.  No doubt an odd conclusion. The F grade indicates impending carmageddon, but in reality is merely a projection that people will have to drive near the speed limit for one hour a day.

It also appears the projections are based on flawed assumptions.  In their report, WisDOT makes the assumption, not an actual measurement, that “From this set of historic traffic pattern data it can be concluded that the current weekday traffic volume on the Hoan Bridge, without the current maintenance lane closure impact on traffic, is 48,200 vpd (vehicles per day).”  Essentially, WisDOT is estimating that 12% (6,400 vpd) of the traffic on the Hoan Bridge is currently being diverted to other roads due to lane closures for construction.  While this assumption seems somewhat out of line when compared to recent traffic counts (for example 2010 where the count was 42,900 vpd), this isn’t the only issue with this assumption.  The report makes another assumption, contrary to this one.

“The capacity analysis does not assume any traffic diversion to other routes that could result from a permanent capacity constrained 2-lane condition to accommodate a shared-use path on the Hoan Bridge.”   In other words, when predicting the future congestion levels for design 1A, WisDOT makes the projections based on the three lanes of travel, and ignores the likely possibility of permanent traffic diversion due to a permanent lane reduction (that the 12% they estimate is diverted currently would stay diverted).  The idea that traffic will divert for construction, but not for a permanent lane reduction is questionable, if not contradictory, and calls into question all of the future traffic projections.

Remember that just a few years ago, WisDOT released a document considering replacing the Hoan Bridge with surface level bridges.

Our hope is that WisDOT re-evaluates the traffic projections based on actual traffic counts, and proceeds with Alternative 1A.

21 thoughts on “Is WisDOT Inflating Traffic Counts in the Hoan Bridge Bicycle Study?”