How Police Reach Out to Youth

The STOP program connects police and youth to help gain their cooperation with cops.

By Mark Doremus, Milwaukee Neighborhood News Service - May 28th, 2013 12:10 pm
Get a daily rundown of the top stories on Urban Milwaukee

The youth in the city feel police are harassing them no matter what the reason for the stop is. The youth often show their distain by being disorderly, running or fighting. I have spoken to youth and they have made it clear they do not want or like police interaction.

There’s a disconnect between police officers and minority youth in the inner city. Many young people of color on the streets in high-crime neighborhoods of Milwaukee don’t understand or trust the police. And that doesn’t just hurt the police department’s image, it also makes it harder for police to enlist the help of residents in trying to nab the perpetrators of crimes.

To address that problem, a couple of Milwaukee cops have created the STOP program. The acronym stands for “Students Talking it Over with Police.” It’s a home-grown Milwaukee curriculum that brings young people with leadership potential face to face with police to promote mutual respect and understanding.

Milwaukee Police Chief Edward Flynn initiated the project in August 2010. He challenged police officers in District Five to come up with a program that would get police and young people communicating.

Officers William Singleton and Cullin Weiskopf seized the opportunity and developed the STOP program. They’ve presented the curriculum to about 500 young people so far. The program has been evaluated by researchers at the UW-Milwaukee, and they’ve concluded that it works on a number of levels: it informs young people about police practices, gives them a better understanding of their constitutional rights and – perhaps most importantly – helps them achieve more positive interactions with police by giving them some conflict-avoidance skills. 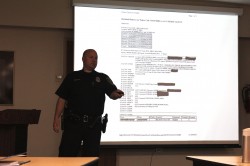 Officer William Singleton shows STOP participants what officers see on their squad-car computer screens when a call comes in. Photo by Mark Doremus.

At the Milwaukee Safety Academy on North Teutonia Avenue, Officers Singleton and Weiskopf recently conducted an abbreviated STOP program for a group from Big Brothers Big Sisters of Milwaukee. This was a STOP “mini-session” – a two-hour abbreviated program. Ordinarily the STOP curriculum is comprised of seven workshops; the mini-sessions were added to expand the reach of the program to meet increasing demand.

After pizza, soft drinks and introductions, it was time for the crime maps. The maps of Milwaukee’s inner-city neighborhoods were crowded with tiny dots – each representing a violent crime. Every day, Singleton explained, police supervisors analyze the maps and put extra squads on the hot spots.

As the saying goes, Singleton noted, “where there’s dots, there’s cops.” It’s the cops’ job, of course, to deter crime or respond to it after the fact and apprehend the bad guys. The investigative methods of choice are close observation and face-to-face jawboning with persons of interest.

Citizen encounters can take a variety of forms.

The most innocuous is the so-called “social contact,” a voluntary conversation between an officer and a citizen who is free to leave at any time.

The next step up is the “field interview,” also known as a “Terry Stop” after the 1968 U.S. Supreme Court case that established its legality. Here, the subject is detained for a brief period of time so police can ask questions, establish the person’s identity, and check for warrants. In order to make a valid stop, police must have a “reasonable suspicion” the person detained is a lawbreaker.  During a stop police can pat down the person for weapons.

At some point during the stop the officer reaches a decision point: free the subject, issue a citation or make an arrest.

An ordinance violation is enough to trigger a stop.  Spit on the sidewalk, for example, and police can detain you, question you and pat you down.  They may or may not give you a ticket, but they’ll definitely use the stop as an opportunity to question you in an effort to turn up evidence of a more serious crime.

Police behavior during these encounters is governed by the MPD Code of Conduct: competence, courage, integrity, leadership, respect, constraint. Officers are trained to use the Tactical Eight-Step Approach when dealing with citizens. Among other things they’re supposed to greet the subject, identify themselves and explain the reason for the contact. The goal is to make routine encounters as painless as possible for both police and for anyone who is stopped but hasn’t committed a serious crime.

The final, and perhaps most important message of the STOP program is twofold: police are people, too, and your behavior during an encounter with them will have a significant influence on how the interaction goes down.

On the “police are people, too” theme, during the evening session with the Big Brothers Big Sisters group, Singleton and Weiskopf asked participants to consider what a start-of-shift briefing might feel like to a cop if their patrol area has a high incidence of violent crime. That can make them feel threatened and apprehensive but they still have to go out there and do their jobs. The experiences they’ve had throughout their career and the particular experiences on a given day during a citizen encounter are all going to influence their behavior.

Therefore, STOP participants are advised, keep your emotions under control, be courteous, watch your body language, listen to what the cop is saying, don’t talk back, and present your STOP graduate ID card if you’ve got one.  Above all, don’t take the whole thing too personal — the cops are just doing what they have to do to keep you and your neighborhood safe.

Much time was spent with the Big Brothers Big Sisters group talking about how police react to a crime in progress.

When a crime occurs and police respond, chances are they’re acting on information that appears in text form on their squad car laptops or verbally over their police radios. Singleton and Weiskopf demonstrated how that information can be garbled – leading police to stop and question innocent bystanders near the crime scene.

First off, eyewitness suspect descriptions are notoriously unreliable. Filter the information through a police telecommunicator, and then a dispatcher, transmit it over a police radio or through a computer to the officer in the field and that further degrades the quality of the information. Inevitably, cops responding to a crime with a description “black male, 25 years old, blue jeans, white tee-shirt” are probably going to stop and question some young black men who are innocent but happen to be in the area and broadly match the suspect description.

The officers are likely to be in a hurry and under stress, STOP participants were told.  They may need to interview a bunch of potential suspects very quickly and in those cases may not be polite or explain in detail what they’re up to. If you’re stopped under those circumstances just take a levelheaded approach to the encounter, Singleton and Weiskopf advised, and understand that if you are not the perpetrator it’ll be over and you’ll be on your way. Don’t escalate the situation by reacting to what you’re getting from the officer.

All that does seem to sink in for program participants. 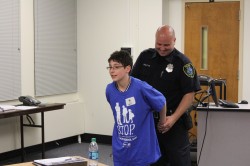 A STOP participant gets cuffed — just for fun. Photo by Mark Doremus.

Take for example Sergio Sepulveda, a STOP graduate from Veritas High School on the South Side of Milwaukee. Before he went through the program, Sepulveda said, he thought the cops just hassled him because he’s a “Mexican.” His STOP experience seems to have changed his mind.

“They showed us why they stop people,” Sepulveda said. “They showed us how to communicate with a police officer. Don’t get aggravated right away, just talk to them.

“I used to be scared of the cops, but they taught me all of that stuff so it changed my mindset of cops dramatically.”

Or consider the testimony of Veritas student Keng Yang. “I felt that police were just trying to hurt people, going around stopping them for no reason,” he said. “After the STOP program my attitude changed because I feel like, what Officer Singleton and them did was put us in their situation. What would you do?

Over at St. Marcus Lutheran School on Palmer Street, the STOP program also seems to have had a positive impact.  As student Tavarina White put it, “They told us how they’re supposed to approach you and be respectful. It’s all up to you how your experience can go. If you act mad and want to fight against them they’re going to respond, but if you just stay calm and answer their questions, you’ll be okay, as long as you’re not the one they’re looking for.”

Those comments are backed up by experimental data that show the STOP program has a positive influence on youth attitudes toward police — at least when police officers themselves present the workshops.  Furthermore, according to a program evaluation by UWM professors Kimberly Hassell and Tina Freiburger, young people who complete the program are likely to spread the word to others – family, friends, peers and relatives – giving the program a helpful ripple effect.

According to Singleton, the STOP program will be expanding dramatically in the fall. With 50 more officers trained to conduct the workshops, Singleton hopes to reach 500 students in the Milwaukee public schools. With its positive reviews so far, there is reason to believe the STOP program may become a national model for improving relationships between law enforcement and urban youth.

4 thoughts on “Flynn’s Force: How Police Reach Out to Youth”