How a community liaison officer gets neighbors involved in combating crime.

Midtown Milwaukee is a neighborhood under stress.

It is bordered by North Avenue, West Highland Avenue to the south, 20th Street on the east and 30th Street to the west.

It’s an area of older homes, most of them built before World War II. It is racially mixed although predominantly African-American. The population is younger and the median income and educational level well below the city average. It has some owner-occupied housing but is trending toward more rentals and board ups.

Still, it remains a neighborhood with hope for the future, in part because it has residents willing to work with police to maintain the rule of law. And that makes it a place where a community liaison officer, like Melissa Jones, can do her best work.

On a recent weekday afternoon, Officer Jones was making her rounds, calling on her civilian contacts in District 3.

She started by chatting with community organizer Diane Kosarzycki outside a boarded up property on McKinley Avenue. Kosarzycki covers Midtown for a non-profit called Safe & Sound. She knocks on doors, listens to residents’ concerns, and encourages them to get involved in civic life at the neighborhood level.

“I’ve worked in this neighborhood for a year,” Kosarzycki says, “and I can point out homes where there are really committed people who live here, residents who love their community – they just wish it would be a little safer.”

The trick is to break through the reluctance of long-time residents to be seen as a “snitch” about suspicious activities in a neighborhood with an influx of renters and transients. That’s where the community liaison officer can help.

“People are afraid of retaliation,” Kosarzycki says. “Having Officer Jones come to their meetings and the opportunity to express their concerns in a safe environment, people are more forthcoming because they realize they have the power to make change in the neighborhood.”

After getting an update from Kosarzycki on neighborhood goings on, Jones stopped to see homeowner Lois Redic, who has lived on McKinley Avenue with her husband Henry since 1972.

What worries her, she told the officer, is what she sees outside her front door: kids running wild and renters living in broken-down housing. She sees a trend in her neighborhood toward a lack of respect for the law and for fellow citizens. 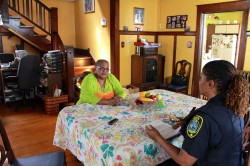 All this came out as Redic talked to Officer Jones at her dining room table. It’s obvious from the conversation that Redic values her relationship with Jones, a District 3 community liaison officer. Jones is someone she can relate to, somebody she knows will take her concerns seriously and respond when she identifies a problem in the neighborhood. She knows Jones will report back to her and be accountable; she’s not just an anonymous voice on the telephone.

Jones is visiting Redic in part to let her know she had checked out a concern Redic had expressed. “You reported some very young kids in diapers who seem to be out on the sidewalk without supervision,” Jones notes. “I want you to know that we followed up and it’s an ongoing investigation now with regards to the welfare of the children.”

Police say they need the cooperation and trust of people like Redic, who calls herself the “grandma on the block,” to be effective. The cops can’t be around all the time, so they need eyes and ears in the neighborhood to help them identify problems, whether it’s a property defect or disruptive behavior or inattentive parents.

That comes from responsible members of the community who are confident enough in the police to take the risk of calling out the troublemakers. But for this to happen, experts say, you need a critical mass of responsible people who are invested in the community. According to Captain James Harpole, assistant chief of police in charge of the North Command and a 28-year member of the Milwaukee Police Department, there are some neighborhoods where there just aren’t enough people who want to work with the police, so the department can’t gain a foothold and establish a network of positive relationships.

In those neighborhoods other kinds of enforcement efforts, such as highly visible saturation patrols, are considered more effective. The Neighborhood Task Force, a team of officers that can be assigned wherever needed, focuses its efforts on high crime neighborhoods where a lack of civilian leadership makes community policing less promising as a law-enforcement tactic.

Of course, there will never be enough cops available to saturate every location where they might be needed. Inevitably, as police chief Edward Flynn has pointed out, the long-term prospect for improvement depends on relationships with civilian stakeholders who want to work with police to keep things under control. Nurturing that kind of civic responsibility is what community liaison officers like Melissa Jones are all about.

In contrast to Lois and Henry Redic, who are longtime residents of Midtown, Jeanette and Patrick Gleason are newcomers to the Washington Park neighborhood. They’ve recently moved into a building on the 4400 block of West Lisbon Avenue. They’ve renovated the upstairs as a living space and they have completely redone the downstairs to house two businesses, one a coffee shop and the other a school of photography.

The Gleasons are not natives of Milwaukee. They came here after their kids were grown, looking to make a lifestyle change. As business owners and residents, they are very active in the neighborhood block watch. They’re working with Officer Jones to bring neighborhood stakeholders together to watch out for criminal activity and nurture an orderly community environment. Demographically the Gleasons are different from the Redics both in age and ethnicity, but in terms of their interests and concerns they are similar. They have a big investment of money and sweat equity their neighborhoods and don’t want disruptive elements preventing them from achieving their goals.

The Gleasons have something else in common with the Redics: they live in a transitional neighborhood. There’s a distressed low-income area to the east and the more prosperous community of Wauwatosa to the west. And like the Redics, they are energized by the attention they’ve received from Officer Jones. As Patrick Gleason explains, “It’s just the idea that somebody’s available and is going to respond that makes a big difference. We go to the neighborhood crime watch meetings once a month at District 3, so we know what is happening in the neighborhood. We can sit and listen to the statistics but we want to be more proactive in curtailing some of those things so they no longer happen.”

That’s exactly what Officer Jones wants to hear from her constituents.

“What I do as a liaison officer is priceless,” she observes, “because I get to speak to people in the neighborhood and encourage them to participate in maintaining order. It’s very important that the community feels safe enough so they feel they can call the police and they will respond to the barking dog or troublesome neighbors.”

Some people might call those incidents minor stuff that doesn’t really matter, but Jones disagrees.

“I believe that I’m doing just what I was asked to do when I raised my right hand and became a police officer.”